5. Morgan In Lineup: After meeting with MLB officials for over four hours this afternoon, Nyjer Morgan's name was penciled into the starting lineup for tonight's game against the Florida Marlins, as no decision has yet been reached on his appeal of the eight-game suspension that was handed down for the Nats' outfielder's central role in the bench-clearing brawl with the same Marlins who are in DC tonight for the first of three in the nation's capital. "I'm not sure if and when the suspension's going to come," Nats' Skipper Jim Riggleman said in a pregame press conference, "In preparing for it, we're going to try [Danny] Espinosa there at the top of the lineup and so if there is a suspension, Danny will have had a few days here to acclimate himself to that part of the lineup and see how that goes." Morgan receives a nice ovation in his first at bat in the Nats' second, and he singles to right-center with two down to draw some more applause from the crowd, and clear the pitcher's spo---and then it's gasps and sighs of disappointment as he's thrown out trying to steal second with the Nats' starter at bat. Oh, Morgan...Asked what he thought of Morgan's decision to steal second with two down and the pitcher up, Nats' Skipper Jim Riggleman said, "Nyjer, he's hitting eighth there, but that's his game. I can't ask him to hit eighth, but don't run. I really thought that he'd get that base. The pitcher wasn't real quick to the plate but the catcher made a great throw, and he got him. That's Nyjer's game, I can't take that away from him." (ed. note - "It's also Morgan's league-leading 17th caught stealing in 50 attempts.")

4. BONIFACIO!!!: National-for-a-minute Emilio Bonifacio starts the game with a sharp grounder off Nats' third baseman Ryan Zimmerman's glove and by Ian Desmond at short for a leadoff single into left, and then the speedy Marlins' leadoff man steals second on Pudge Rodriguez before scoring on an RBI double to the left-center gap by Dan Uggla. Hanley Ramirez, who walked an at bat before Uggla moves to third on the gapper and scores on a sac fly to right so it's 2-0 Marlins before the Nationals get up.

3. MOAR MORSE!! MORE FAIL: Nats' right fielder Michael Morse doubles to left and out of Logan Morrison's reach to start the fifth, but after a trademark groundout by Pudge™ and a foul pop by Nyjer Morgan on the first pitch he sees from Marlins' starter Alex Sanabia, it looks like Morse will be stranded. Nats' lefty John Lannan keeps hope alive, however, when he takes a two-out walk to get Danny Espinosa up, but the Nats' newest infielder's bid for a three-run blast dies on the track as Marlins' right fielder Mike Stanton makes the catch with his back pressed up against the out-of-town scoreboard...2-0 Marlins after five.

2. Cool Hand Not Enough: Marlins' catcher Brad Davis bounces a hard-hit liner off the flowers above the left field wall and back into play to put the Marlins up 3-0 over Washington in the seventh. A single by Marlins' starter Alex Sanabia has the Nats' relievers up and tossing, but Lannan strikes Emilio Bonifacio out for his 6th K of the night and gets help from Ian Desmond on a sharp line drive to short for out no.2 before he's lifted. Tyler Clippard gives up back-to-back singles to the first two batters he faces (on two pitches) before Wes Helms' fly ball to right ends the Marlins' seventh. Lannan's Line: 6.2 IP, 7 H, 3 R, 3 ER, 3 BB, 6 K's, 1 HR allowed, 110 pitches, 70 strikes.

1. Joe Bisenius' Long Road Back: When Baseball-Reference.com has a "Final Game" listed along with your stats, and you haven't made a major league appearance in over three years, the fact that you make it back to the mound in the majors at all is admirable. The fact that you're still throwing mid-90's heat and are able to record a scoreless inning of relief work earns you a mention. Nats' right-hander Joe Bisenius gives up a two-out single to Marlins' catcher Brad Davis but is otherwise able to complete a scoreless frame in his first major league action since April 7, 2007 against the same Florida Marlins...which was two days after his MLB debut.

1 A. Bonus Play: Sean Burnett gives up a one-out single to Logan Morrison in the Marlins' ninth, and Burnett's lifted for Nats' closer Drew Storen, who gets Hanley Ramirez looking then gets up 0-2 on Dan Uggla, but goes to the same high slider outside one too many times and Uggla goes with it and lines the ball into right, Morrison rounds third, Justin Maxwell comes up throwing, and hits the cutoff man Danny Espinosa who fires it home to Pudge, Morrison's dead, "You'rrrre out," yells the Ump. Espinosa's SS arm is useful all over the field. Nats drop this one 3-1 though and drop eight of their last nine against the stinkin' FISH. 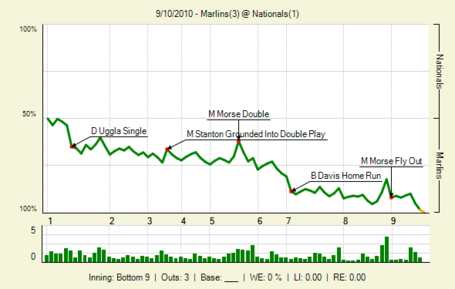