5. Marquis In DC: (0-4) with 19 ER, 4 HR's and 9 walks allowed in 4 starts in Nationals Park this season, Nats' right-hander Jason Marquis, in his last few outings, has been the pitcher that Washington thought it was getting when the then-31-year-old right-hander signed a 2-year/$15M dollar free agent deal this winter, but he still hasn't earned his first curly-W in front of the home crowd. Marquis starts the game with 3.0 scoreless, striking out 5 of the first 9 batters he faces and holding the Marlins hitless the first time through the order.

4. E: 110, 111: The Nats' right-handed starter gets back-to-back grounders to start the game, one to Danny Espinosa at second off Emilio Bonifacio's bat for the first out and one to Adam Dunn at first, off Logan Morrison's that bounces off Dunn's leg and ricochets over toward second where it rolls to a stop, unplayable for the Nationals 110th error of 2010 and Adam Dunn's 9th E of the season. Jason Marquis strands the runner there with back-to-back K's from Hanley Ramirez and Dan Uggla and those who think Dunn's defense will lead to his departure have more ammunition...Top of the 9th: Cameron Maybin triples off the wall in left, and scores when Adam Dunn misplays a routine grounder from Fish catcher Brad Davis, for Dunn's 10th and the Nationals' 111th error of 2010.

3. BONIFACIOOOO!!!!!: Chad Tracy's single up the middle in the fifth is the first hit of the day for either team, and it's quickly followed by a Mike Stanton single through short. Before the back-to-back singles, the only runner from either team to reach base was Logan Morrison on Dunn's error in the first. Marquis loses Cameron Maybin and ends up walking the bases loaded with no one out. Marquis gets Brad Davis looking for his sixth K, gets Anibal Sanchez swinging for his seventh, and then gives up a 2-out single to center to Emilio Bonifacio to put Florida up 2-0, and only a brilliant diving play by Espinosa on a Logan Morrison grounder with eyes for center gets Marquis out of the inning. (ed. note - "Bonifacio doubles to start the eighth and scores on a Logan Morrison single that puts Florida up 3-0 on the Nats. BONIFACIO!!!")

Jim Riggleman: "That was a great play. The range to get it and then the arm to finish the play off was a tremendous play. I don't know what more you can do there. You see highlight films and all that stuff, but I don't know how much further anybody can go to get a ball and then to throw it the way he did was tremendous..."

2. 5-3-6 DP: Hanley Ramirez rips a single through short and tosses his bat confidently over his shoulder as he runs to first. Dan Uggla tears into another Marquis' fastball with Ramirez running from first, and it bounces off Ryan Zimmerman's glove, but straight up, allowing Zim to recover and throw to first, Adam Dunn gets the out there and fires a strike to third where Ian Desmond tags Ramirez, 5-3-6 DP!! Brilliant D from Zim, Dunn and Desi. (ed. note - "Jim Riggleman: "I haven't seen that double play all year from anybody.") Marquis strikes Mike Stanton out for his 8th K of the day, and he's done after 6.0 IP, 5 H, 2 ER, 1 BB, 8 K's, 99 pitches, 67 strikes, 7 groundouts, 2 flyouts. But no win for Marquis in DC.

1. Anibal Sanchez: The Marlins' right-hander Anibal Sanchez doesn't give up a hit until the fifth when Michael Morse hits a two-out double by third and into the left field corner. Nyjer Morgan grounds out in the next AB and Sanchez has retired 15 of 16 through 5.0. 18 of 19 through 6.0. Ryan Zimmerman smokes a one-out single through second in the seventh, but Adam Dunn swings at the first pitch he sees and grounds into an inning-ending DP. The Nats finally knock the Marlins' starter out when Nyjer Morgan reaches on a two-out infield single in the eighth and takes second on an errant pickoff throw to first by Sanchez. Wilson Ramos doubles over Cameron Maybin's head in center and Morgan scores, 3-1 Marlins in the eighth. Sanchez is done after 7.2 IP, 4 H, 1 ER, 0 BB, 4 K's, 100 pitches, 68 strikes, 13 groundouts and 5 flyouts. A leadoff walk by and a one-out single off Marlins' closer Clay Hensley by Danny Espinosa and Ryan Zimmerman, respectively, bring the tying run to the plate in the form of the Nats' big middle-of-the-order bat Adam Dunn, who K's swinging before Roger Bernadina's groundout ends the game. 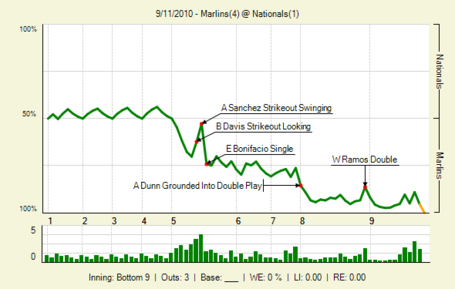