Share All sharing options for: Washington Nationals Swept By Florida Marlins, 6-5 Final. Lose 13 of 18 To Fish In 2010.

5. E: 112: After back-to-back groundouts in the first, Nats' right-hander Jordan Zimmermann issues a two-out walk to Hanley Ramirez and a Dan Uggla grounder goes in and out of Ian Desmond's glove, so it's runners on first and third when Chad Tracy steps in. E: 112 on the season for the Nats, E: 32 of 2010 for Desmond. Tracy lines softly to second, so no damage done, except to Zimmermann's pitch count.

4. The Monster Gets A Hanger: The Marlins' rookie right fielder Mike Stanton works the count full against Zimmermann in the second and gets hold of a 3-2 curve that's crushed, deeeeeep to left and 15 rows back into the stands for his 19th HR of 2010. 1-0 Marlins...Zimmermann won't throw that curve to Stanton again. Zimmermann walks Cameron Maybin in the next AB and gets a groundout from Marlins' catcher Mike Rivera. Two down after Fish starter Chris Volstad bunts Maybin over, and the Nat Killer Emilio Bonifacio rips a single to short, Desi fields and throws...by first. Maybin scores, Dunn can't pick it. 2-0 Marlins. Bonifacio steals second, and Zimmermann spins and throws to try to pick him off but it sails into center, Bonifacio scores, E: 113. 3-0 FISH after one and a half. 58 pitches through two by Jordan Zimmermann.

3. Veteran Leadership = No GiDP: Ivan "Pudge" Rodriguez's DP totals this season are a source of much frustration for some and more than likely for Pudge more than anyone, so you'd forgive Nats fans for wondering if he'd do it again when he came up with the bases loaded and one down in the Nats' second. A leadoff walk to Adam Dunn and back-to-back one-out singles by Michael Morse and Nyjer Morgan set the veteran backstop up with a chance to get the Nats on the board and Pudge comes through. Two-run single through short, 3-2 Marlins. Jordan Zimmermann tries to get a sac bunt down, but misses the first two attemps and swings away instead, grounding into an inning-and-rally-ending double play.

2. Stanton Hits Fastballs Too: A half-inning after the Nats rally to get within one, Jordan Zimmermann gives up a one-out single to Chad Tracy and then tries to sneak a 1-2 fastball by Mike Stanton inside and the Marlins' 20-year-old slugger hits his 20th HR of 2010, out to left again, this time for a two-run blast and a 5-2 Marlins' lead. The Nats add a run in the home-half of the third when Ian Desmond singles, steals second and takes third on an errant throw by the Marlins' catcher before scoring on an RBI single by Ryan Zimmerman, 5-3 Marlins. 6-3 Marlins when Emilio Bonifacio scores on a two-out groundout by Dan Uggla in the fourth. Roger Bernadina singles to start the Nats' fourth, steals second (Bernie's 15th SB), moves to third on a Nyjer Morgan bunt and scores on a Pudge groundout, 6-4 Marlins, and 6-5 when Bernadina knocks Zimmerman in from second with a two-out single in the Nats' fifth.

1. 5-13?: Including the final out of the fifth, the Nats' final 13 batters go down in order, and the Nats lose 6-5. Florida sweeps the final series of the the 2010 season with Washington and after finishing the 2009 season 6-12 against the Marlins, the Nats drop three-straight to the Fish to end the season series with their NL East rivals 5-13. The Nats' 5th straight loss puts them one L away from tying their season-high 6-game losing streak. The Nats' are swept in a series for the eighth time this season, the second time by the Fish, and they end the year by dropping 10 of 11 to the Marlins...After the game, Nats' Skipper Jim Riggleman and all of the team's coaches addressed their players...more on that a little later. 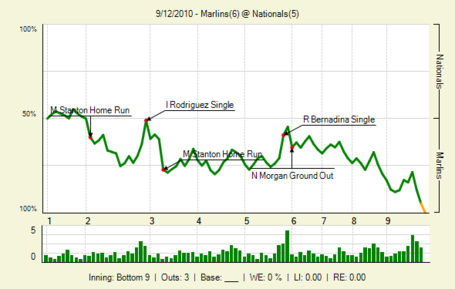