5. Spinner?: The Nats' new leadoff man, Danny Espinosa gets himself on with an opposite field single to left off Braves' right-hander Derek Lowe, but he's thrown out at second on a hit and run gone wrong when Ian Desmond K's swinging through a 3-2 fastball and ATL SS Alex Gonzalez makes a sweeping tag on Espinosa as he runs in front of second. Roger Bernadina K's looking and the Braves avoid early trouble.

4. Maya Better: Yunesky Maya needed 21 pitches to get through the first inning of his debut against the New York Mets in Nationals Park, and he gave up 2 singles, a 3-run HR and a walk. Tonight it takes the 29-year-old rookie right-hander just 13 pitches, 10 of them strikes to get through a 1-2-3 first in which he gets two fly balls to right and a groundout to short for a quick scoreless frame.

3. Back-To-Back Walks And Two Balks: After issuing back-to-back walks to Brian McCann and Derrek Lee, Yunesky Maya's called for two balks. The second one forces in a run. Maya keeps moving his shoulder then going into his pre-delivery pause. Jim Riggleman comes out for an explanation. 1-0 Braves. 2-0 on Nate McLouth's RBI double. 3-0 Braves on Matt Diaz's run-scoring triple and 4-0 on a two-out line drive to center by Omar Infante. Maya throws 36 pitches, one of them aimed squarely at Jayson Heyward's front leg. Which Heyward did not appreciate. Not this again....49 pitches after a 36-pitch second.

2. E: 33, E: 114: Brian McCann rips a sharp grounder to short and a bad hop goes off Ian Desmond and into center. That's error no.33 of 2010 for the Nats' shortstop and E: 114 on the year for the Washington Nationals, bringing the Nats within three E's of the MLB-leading Chicago Cubs.

1. (>I): ATL right-hander Derek Lowe's loading up on strikeouts. Through 4.0 scoreless, Lowe's got 6 K's, five of them backwards (>I), and he's held the Nats scoreless, limiting them to just 3 hits. After Lowe gets Michael Morse swinging to start the fifth, Nyjer Morgan reaches when a bad hop bounces off D. Lee at first. Infield single. Wilson Ramos flies out to deep right, Nate McLouth has to make a running catch over his shoulder to get it on the track. 5.0 scoreless for Lowe, 4-0 Braves in Turner Field.

-2. 2 of 5: Ryan Zimmerman's second hit of the night is one of only five the Nats have off Lowe. The Braves' 37-year-old right-hander gets a DP grounder out of Adam Dunn though to erase the leadoff runner and he gets a swinging K from Michael Morse to tie his career high with 11 K's in the game. The first time since June 15, 2007, when Lowe struck out 11 LA Angels in an interleague matchup in Dodger Stadium. In the 8th, Lowe gets Nats' catcher Wilson Ramos swinging with a slider for no.12 on the night and a new career high. 4-0 Braves in the eighth and after 8.0.

-2. New Season High: The Nats' sixth-straight loss ties a season-high, matching the six-in-a-row they dropped to the Detroit Tigers and Chicago White Sox from June 15th-20th. The Nats strike out 15 times, 12 by Lowe and three in-a-row by ATL closer Bill Wagner in the ninth when Danny Espinosa, Ian Desmond and Ryan Zimmerman all chase the 38-year-old left-hander's slider. Ian Desmond's 0 for 4 with 4 K's. 2 K's each for Bernadina, Zim and Morse. The Nats manage just 6 hits and get just one batter by first when Nyjer Morgan doubles to start the 8th and is stranded there...ugh...

• Miss The Game? The DC Faithful Were Disgusted... 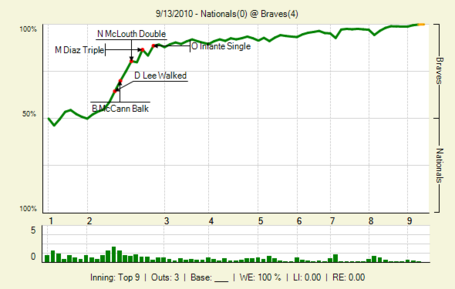