5. Dunn Leaves Turner Field: Ryan Zimmerman singles to start the second, lining a hanging slider to left to bring the Nats' big middle-of-the-order bat to the plate. Braves' right-hander Jair Jurrjens leaves a 1-1 change up outside and Adam Dunn destroys it, out to right, over the stands and onto the walkway near the Chop House. By most estimates it travels around 460-470ft. 2-0 Nats on Dunn's 35th HR of 2010. Nyjer Morgan singles with one down, and he's running when Pudge rolls a DP grounder to short, so he's safe at second with two down for Livan Hernandez, who doubles over a desperate diving Nate McLouth in center for an RBI double and a 3-0 Nats' lead.

4. Mr. National Does It All: Jair Jurrjens hangs another slider, this time it's not Zim, it's Livan Hernandez, and it's GONE!!! Livan lines to left and it skips off the top of the wall and into the stands. 4-0 Nats on Livan Hernandez's first HR since July 4, 2007. Then Livan takes the mound, surrenders a leadoff single to Brian McCann and two outs later picks the Braves' catcher off first when he tries to get the jump on the Nats' veteran right-hander. 4.0 scoreless for Livan Hernandez, 4-0 Washington over Atlanta.

3. The Name's National, Mr. National: After walking and hitting Jason Heyward, Livan finally gives up a hit to the Braves' rookie, who lines to right to start the bottom of the sixth. Martin Prado rolls a grounder out to short, however, and it's Ian Desmond, Danny Espinosa and Adam Dunn, double play!! Brian McCann lines a two-out single over Ian Desmond's outstretched glove and into center, but Mr. National gets D. Lee looking with a fastball low and inside for a called strike three and 6.0 scoreless on the hill for the Nats' starter. 90 pitches, 57 strikes, 4 K's, 5 groundouts, 7 flyouts. And the Nats go up 5-0 when Danny Espinosa hits a leadoff double off Braves' righty Kyle Farnsworth and takes third on a sac bunt by Ian Desmond before scoring on Roger Bernadina's sac fly.

2. "Even with a 5-0 lead in the 8th, He Still Won't Throw Strikes." -Frustrated Braves' fan: I started tonight's GameThread by writing that, "Livan's 'measured' approach will hopefully drive these eager playoff chasing Braves crazy," then sat back and watched as the 35-year-old 15-year veteran shut Atlanta's batters down, holding the Braves off the board through 8.0 scoreless innings in which he allows just 5 hits. Ian Desmond gives the Nats a 6-0 lead in the top of the ninth when he hits his 10th HR of 2010 to straight-center off Atlanta Braves' righty Scott Proctor. Sean Burnett strikes out the side in the ninth and the Nats shut the Braves out. Livan's 10th win gives the Nats a double-digit winner for the first time since Tim Redding won 10 in 2008. 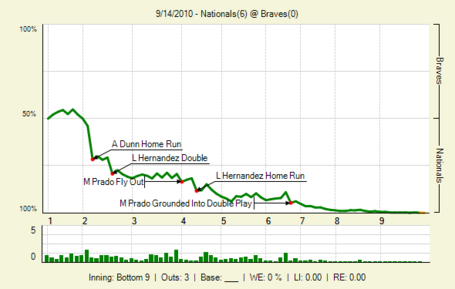