5. J-MAX!!!: After a scoreless first, Braves' left-hander Mike Minor gets himself into a jam, giving up a one-out ground-rule double to Michael Morse, a single to Wilson Ramos and a walk to Alberto Gonzalez to bring Justin "J-Max" Maxwell to the plate with the bases loaded. J-MAX makes them pay!! GONE!! Grand Slam!! J-Max's 3rd Grand Slam in 225 career plate appearances. According to reports from the press box, Maxwell's now 3 for 4 with 3 Grand Slams in his career when he bats with the bases loaded. 4-0 Nats in the second. Braves officially on the ropes as far as playoff contention.

4. Cool Hand Gets Help: A two-out walk by Nats' starter John Lannan in the second is erased by a 1-6-4-3 DP on a grounder by Braves' catcher David Ross that deflects off Lannan on the mound to Ian Desmond at short, Danny Espinosa at second and on to Alberto Gonzalez at first for the inning-ender...A two-out walk to Jason Heyward in the third brings Martin Prado to the plate, but Prado's line drive to right hits Heyward in the foot for the final out of the frame. 3.0 scoreless for the Nats' left-handed starter. Lannan starts the fourth with his third walk of the game, putting Troy Glaus on, and two outs later this one scores. 4-1 Braves on an RBI groundout by Melky Cabrera.

3. Two-Baggers Hurt Lannan: The fourth double of the day for the Braves off John Lannan puts Omar Infante in scoring position with one out in the Braves' fifth. Lannan pops up Jason Heyward for the second out of the inning, but Martin Prado, who's 2 for 2 on the day is 3 for 3 after his two-out RBI single makes it a 4-2 game. Prado gets caught in a rundown going for second, and the Nats hold on to the two-run lead. 4-2 after 5.0.

2. 'Nother One In The Books, Boss: A one-out single by Matt Diaz, (who's 3 for 3 with 2 doubles after the hit) and a two-out single by Melky Cabrera put the tying run on first with two down and Braves' backstop David Ross at the plate. Lannan gets behind the batter, 2-1, but gets a called strike two and a swinging K to strand two and hold the Nats' two-run lead through 6.0 innings. Lannan's pulled after warming up for the 7th. Lannan's Line: 6.0 IP, 8 H, 2 ER, 3 BB, 6 K's, 99 pitches, 56 strikes, 6 groundouts, 4 flyouts. Joel Peralta takes over on the hill when ATL skipper Bobby Cox wastes a batter to force Jim Riggleman's hand. Once Lannan's out, Cox turns to Eric Hinske, who flies to short center, Nyjer Morgan calls everyone off and lets it drop. That's a double. Hinske takes third on a sac bunt by Omar Infante, and Riggleman calls on Sean Burnett. The Nats' lefty gets a soft liner to second from Jason Heyward and strikes Martin Prado out to strand Hinske at third and preserve the Nationals 4-2 lead through 7.0.

1. STOREN WARNING!!!: Troy Glaus singles off Sean Burnett to start the bottom of the eighth, but the Nats' lefty gets Matt Diaz looking and gets a ground ball to third from Alex Gonzalez to Ryan Zimmerman at third, Danny Espinosa at second and on to Morse at first, double play to end the eighth. Nats' closer Drew Storen's got a two-run lead in the ninth. Melky Cabrera grounds out to second!! ONE!! Nate McLouth grounds weakly to first! TWO!! Brian McCann realizes too late that Storen's 1-2 slider's heading for the outside corner and he takes an awkward swing and misses, strike three! Nats win. 4-2 final. 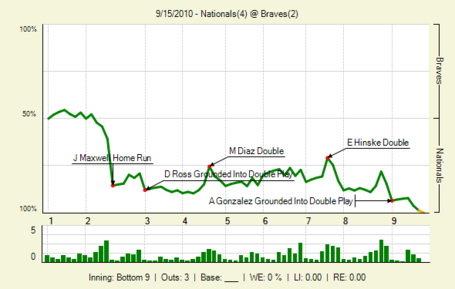