5. E: 117, E: 17: The Philly announcers for this afternoon's game are once again harping on Ryan Zimmerman when he charges a 2-out grounder by Chase Utley and makes a throw from his hip in the unusual sidearm fashion he's come to depend on, but this time it sails wide. Nats' first baseman Adam Dunn makes a dangerous stab into the basepath but the ball hits Utley and bounces foul of first allowing the Philly infielder to take second. With first base open, Maya walks Ryan Howard and then gets the third out of the frame when Jayson Werth grounds out to short. The Nationals' error-plagued shortstop Ian Desmond's aim is true on the throw to first. The throwing error by Zim is his 17th error of the season, and it once again gets folks all a-Twitter talking about if Zim's arm's hurt or he's got the yips...

4. Stare Down + Body Language = BALK!!: Nats' right-hander Yunesky Maya doesn't like a low ball that's called by the Home Plate ump Tim Tschida for ball four and a walk to Raul Ibanez, and with a mix of staring and body language, the 29-year-old Cuban-born starter lets him know he disagrees with the call. As Maya prepares for the next pitch he's called for a balk though no one who's watching can discern any movement. Nats' Skipper Jim Riggleman knows what's going on and he comes out for a talk to let the ump and his crew know he's aware. Philly catcher Brian Schneider reaches on a swinging bunt Zim can't get to in time. Runners on first and third, but Maya pops up Wilson Valdez, gets a K from Joe Blanton when he misses a bunt with two strikes, and gets a line drive to right from Shane Victorino for a scoreless second inning.

3. TAWH!!!: Willie Harris' solo HR starts the Nats' third and gives Washington a 1-0 lead over Philadelphia. With Nyjer Morgan suspended and Justin Maxwell apparently injured, Harris will likely be the outfielder who gets an extended run in the lineup over the next week during what was supposed to be J-Max's time to shine. The 32-year-old Harris' 9th HR of the year is two more than he hit in '09 but four off his pace from '08 when a then-30-year-old Thrillie hit 13 in his first year as a National.

2. Schneiderman!!!: Former National Brian Schneider, who was part of a deal with the Mets in November of '07 that sent the Expos and Nats' catcher to NY along with OF Ryan Church in return for OF Lastings Milledge, puts the Phillies on top in the third when he follows a pair of singles off Yunesky Maya by Jayson Werth and Raul Ibanez with a two-run double to center that gets over Roger Bernadina and bounces off the wall, 2-1 Phillies on Schneider's 4th double of the year.

1. MORE BUNTING FAIL: Michael Morse singles to start the Nats' fifth, but Willie Harris K's swinging in an unproductive at bat. Nats' backstop Pudge Rodriguez collects hit no. 2,812 of his 20-year-MLB career, but Yunesky Maya bunts one too hard toward first allowing Ryan Howard to cut the lead runner down at third. First and second, two down and Philly starter Joe Blanton gets Danny Espinosa swinging to end the threat. Still 2-1 Phillies. Maya hits Placido Polanco in the first at bat of the Phillies' fifth, and two outs and a stolen base later, Polanco scores on a Jayson Werth single to make it 3-1 Phillies, ending Maya's day. Maya's Line: 4.2 IP, 6 H, 3 R, 3 ER, 2 BB, 2 K's, 90 pitches, 50 strikes.

-1. OPPO-BOPPO!! The Phillies' starter is struggling in the sixth when he gives up a leadoff single to Ian Desmond and a one-out walk to Adam Dunn, but he's one out away from escaping the inning when he gives up some OPPO-BOPPO to Michael Morse!! Morse pushes a 3-2 fastball out to right and over the out-of-town scoreboard for a three-run blast and a 4-3 Nats' lead after 5 and a 1/2...And 5-3 Nats in the 7th when Danny Espinosa hits his 4th HR to left for an OPPO-BOPPO solo shot off Philly reliever Danys Baez.

-2. Burnett Owns Lefties, Not Really, But Today: Nats' left Sean Burnett gives up back-to-back leadoff singles to Placido Polanco and Chase Utley in the Phillies' seventh, but strikes Ryan Howard out on three pitches, throws a 2-2 curve by a guessing Jayson Werth and gets a lineout to Danny Espinosa at second off Raul Ibanez's bat to preserve the Nats' lead!! Burnett now up to 10.0 straight scoreless IP since he last allowed a run on August 25th.

-3. TAWH!!: Roger Bernadina comes in standing at second on a bloop hit to right-center that a diving Jayson Werth can't come up with. The Phils give Michael Morse the intentionals to set up the late-inning lefty vs lefty matchup between Philly lefty J.C. Romero and the Nats' Willie Harris, and Harris comes through with a line drive single to left that brings Bernie around, 6-3 Nationals when Bernie beats the throw home.

-4. STOREN WARNING!!: Tyler Clippard works a scoreless eighth. Nats' closer Drew Storen gives up a leadoff single to Placido Polanco to start the bottom of the ninth. Chase Utley lines a double to the corner in left, going all the way the other way with an 0-1 fastball. Two on for Howard, tying run at the plate. Line drive single to center, two runs score. 6-5 Nats. DANGER!! DANGER!!! Jayson Werth works the count full, fouls off a few and crushes a fastball, deep to center and GONE! Ballgame. Two-run walk-off HR to the deepest part of the park. Phillies sweep Nats... 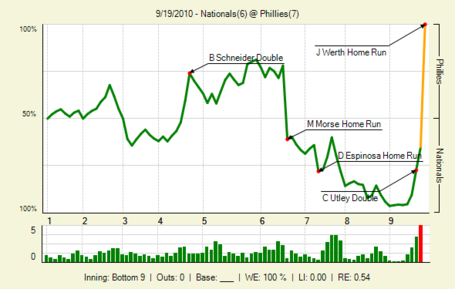