5. The Big Nothing: Half of the DC fanbase seemed convinced that Nyjer Morgan would get hit for what he did to Marlins' catcher Brett Hayes last night in another controversial play at the plate involving the Nats' increasingly volatile center fielder. Morgan was back at the top of the order after having been dropped to eighth by Skipper Jim Riggleman in the last few games. Morgan's there to be hit if the Fish chose to do so, but they don't in his first at bat of the night. Instead, Chris Volstad strikes Morgan out, lowering his AVG a little bit  to .257 on the season rather than putting him on base.

4. 1.2 IP: In an August 11th start against Florida in Washington, D.C., the former Marlins' starter Scott Olsen got hammered by the team that drafted him with the 172nd pick in the 6th Round of the '02 MLB First-Year Player Draft. Olsen wouldn't get out of the second that night, surrendering five hits and 4 runs in the first and a solo HR and RBI single in the second before he's lifted for Miguel Batista after just 1.2 IP in which he surrenders 8 hits, 2 walks and 7 ER, the final run scoring on an RBI single after Olsen's exited. Tonight in Florida, it's the first time Olsen's faced the Fish since then, and it happens again. The 26-year-old left-hander gives up a walk, two singles and three doubles for 5 runs total on 5 hits in the first and then gives up a one-out double, walk and base-loading single before an RBI single Marlins' first baseman Gaby Sanchez, groundout by Donnie Murphy and two-out, two-run hit by Wes Helms chase Olsen from the game after just 1.2 IP in which he surrenders 8 hits, 8 ER and 2 BB. Make that 9 ER as Mike Stanton takes Olsen's replacement Craig Stammen deep to drive in the last of Olsen's 9 runs against...

3. REVENGE!!: Top of the fourth, 14-3 Marlins in a blowout. After a called strike three on the opposing pitcher, Chris Volstad hits Nats' center fielder Nyjer Morgan in the numbers. Morgan's response? He steals second with Ian Desmond up in the next AB, sliding in headfirst and hard. Then in the same at bat, Morgan steals third. This is insane. Ian Desmond finally pops out to short center. Marlins' second baseman Donnie Murphy goes back for it, makes the grab and lands hard on his wrist. That didn't look good. Murphy leaves the field holding his wrist up. (Later diagnosed as a dislocated right wrist). That's two Marlins in two days who probably had their seasons ended on plays involving Morgan. The Fish don't like it. And because he didn't just take it but stole two bases and scored after getting hit, it probably isn't over...

2. The BRAWL: As predicted earlier, It's not over...Justin Maxwell doubles down the third base line to start the Nats' sixth and that leaves first base open for Nyjer Morgan. Volstad throws at him again, behind him. And it's on. Nyjer Morgan charges the mound and throws a left cross at Volstad's head. First baseman Gaby Sanchez clotheslines Morgan, knocking him off his feet. Volstad pounces on Morgan as the Marlins pile on the Nats' outfielder. Nats' third base coach Pat Listach jumps into the mix. What is he thinking? And the benches clear!!! A full-out brawl on the field. It's madness. Nyjer Morgan's getting pummeled. Nats' Skipper Jim Riggleman and Marlins' Skipper Edwin Rodriguez separate their players and then almost come to blows. Morgan's pulled out of the scrum, and he starts in on the fans, gesturing toward the furious crowd and pounding his chest, profanities are flying, Morgan's lost it. The Nats' center fielder has to be held down and guided off the field by the Nats' bullpen catcher. Morgan's done. He's officially lost it. Riggleman and Rodriguez are still jawing. Looks like no one got hurt but there are going to be a lot of ejections, fines and suspensions.....(ed. note - "Top of the seventh, two down. Gaby Sanchez is called to account for his clothesline on Morgan. Doug Slaten hits him. Slaten's gone. Jim Riggleman's gone. This is going to cause some bad, bad blood between these two teams. 16-10 in the seventh, and that's how it ends...")

1. Danny Espinosa Debuts: Danny Espinosa, the Nats' '08 3rd Round pick out of Long Beach State University takes over at second in the bottom of the fifth with the Washington Nationals down 15-5. Adam Dunn's out of the game, Adam Kennedy to first, and Ian Desmond and Espinosa get their first chance to show Nats fans their middle infield of the future. Espinosa's first at bat comes with one out and Ian Desmond on second in the sixth, after the dust has settled. Espinosa sends a chopper to second on a 1-1 fastball from Marlins' right-hander Burke Badenhop and it takes a high hop over Emilio Bonifacio's head. RBI if it's not an E. It's not, and the first RBI double of Danny Espinosa's Major League career makes it 15-8 Marlins. Espinosa grounds out to second in his second MLB AB, and ends the night 1 for 2 with a double and an RBI. 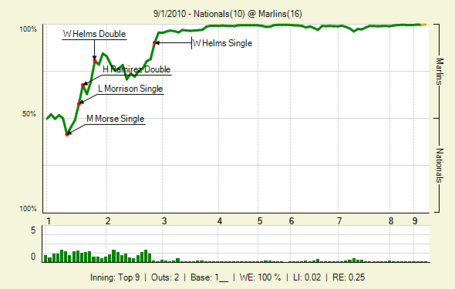