5. NatsTown = GhostTown: In front of an announced crowd of 11,893 which is, anecdotally at least if I average out the attendance Tweets, probably actually around 5-6,000 fans in Nationals Park, Nats' lefty John Lannan's off to a rough start as he gives up back-to-back singles to Jason Bourgeois and Jeff Keppinger, with the stolen base in between by Bourgeois turning Keppinger's single to center into an RBI hit. 1-0 Houston after two batters. Keppinger's allowed to take his time coming home when Jason Michaels hits a two-run HR to left for a 3-0 Astros' lead after a half.

4. Happ-Less: Astros' lefty and former Phillie, J.A. Happ throws three hitless to start the game. John Lannan settles in after the three-run first, and uh, after giving up a two-out single and walk in the second, with help from Jason Bourgeois who gets thrown out trying to steal third with two down to end the inning. The Nats' left-hander puts the Astros down in order in the third and fourth, but Happ's held the Nationals hitless through four...before Michael Morse lines to center for a leadoff single. Pudge Rodriguez sends a grounder through short for the second-straight hit, Morse takes third. Roger Bernadina grounds back to the mound and Morse is caught off third. Disaster. Justin Maxwell K's swinging. Two down. John Lannan takes a two-out walk. Danny Espinosa grounds sharply to third, Chris Johnson steps on the bag...

3. 12-In-A-Row: A leadoff single by Astros' third baseman Chris Johnson in the seventh ends John Lannan's streak of 12-straight batters set down, but Danny Espinosa turns a quick 4-3 DP on a grounder to the second base bag by Tommy Manzella and Johnson's erased. Two down for Lannan. A groundout to Espinosa from Jason Castro ends a scoreless frame for the Nats' left-handed starter. Roger Bernadina starts the Nats' seventh with a double to right and scores on an opposite field single by Justin Maxwell, who'd K'd in his first two AB's. Willie Harris up, Maxwell steals third, but Harris is called out on ball four when the third base ump blows a check swing call. Danny Espinosa pops out to short center. Ian Desmond goes down swinging. 3-1 Astros after seven.

1. PUDGE!!!:  Adam Dunn takes a leadoff walk in the Nats' eighth, and two outs later he's still standing at first after a fly to right by Ryan Zimmerman and a swinging K from Michael Morse. Ivan "Pudge" Rodriguez  gets hold of an 0-2 bender from Felipe Paulino and he bounces it off the foul pole in left, two-run blast, 3-3 game!! Pudge Rodriguez's 309th HR and his 2,814 hit. Roger Bernadina singles, steals second and scores on a two-out pinch hit single to right by Adam Kennedy after Justin Maxwell works a walk. 4-3 Nationals!! Wild pitch on ball four to Espinosa, Maxwell scores, 5-3 NATS!!! 6-3 on a two-out single by Ian Desmond!! Adam Dunn lines to right, beats the shift, scores one more!! 7-3 and 8-3 on Zim's line drive to right. LET'S GO NATS GO!! Drew Storen and Sean Burnett combine to close out the ninth after Storen allows one run to score on a Chris Johnson dinger. Nats win, 8-4 final.

• The Washington Nationals will not lose 100 games this season. 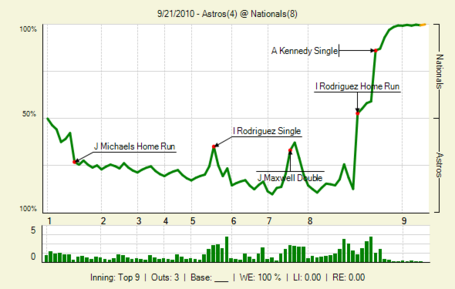