Share All sharing options for: Washington Nationals Shut Out For 13th Time in 2010, 5-0 By Atlanta Braves.

5. Maya? After an 0-2 two-seamer inside caught Braves' right fielder Jason Heyward looking when it broke back in for a called strike three, Yunesky Maya's pitch totals caught everyone's attention, as they realized that he had started the top of the first by throwing eight straight strikes, and after finally missing on an 0-2 bender outside to Martin Prado, the 29-year-old right-hander completed his first scoreless frame when Prado grounded out to short with Maya having thrown just 11 pitches in an efficient first...

4. Nyjer's Back: After serving an eight-game suspension for his actions in the weeks leading up to the bench-clearing brawl with the Florida Marlins a few weeks back and the role he played in that high-profile mess, Nyjer Morgan's back in the Nats' lineup today and leading off for Washington. Nats' Skipper Jim Riggleman said in his daily press briefing that for the remainder of the schedule the team would, "...play around with the top of the lineup between [Ian] Desmond, Bernadina, Morgan and Espinosa, those four guys somewhere in that one or two spot mixing it up," and Riggleman said he was, "...anxious to see Nyjer back out there," and wanted to, "let [Morgan] try to create some havoc out there if he can." Morgan battles Braves' right-hander Derek Lowe in an 11-pitch AB to start the Nats' first, shooting the eleventh pitch by third and hustling around first for a leadoff double, but three outs later he's still standing at second when Michael Morse flies out to center.

3. E: 123 or Desi's Non-Utilitarian Shades: Yunesky Maya gives up a line drive leadoff double to the opposing pitcher, Derek Lowe, who's still standing at second one out later when Jason Heyward pops out to short for what should be the second out of the frame, but Nats' shortstop Ian Desmond loses it in the sun. Two on, one out on what's ruled a single since Desmond completely lost it and let it fall. Maya pops up Martin Prado and now there are two down, when things fall apart completely. Brian McCann grounds sharply toward short, Alberto Gonzalez dives on it, looks to second, but Desi's not covering, so Gonzalez makes a weak throw to first from his knees and Dunn can't handle it. Lowe scores, Heyward comes around, and an alert Yunesky Maya picks the ball up and throws home in time to get the third out after a collision between Heyward and Wilson Ramos. (ed. note - "Nats Daily News' writer/photographer Ian Koski captured the play at the plate.") 1-0 Braves. Unearned run on the Nats' league-leading 123rd E of 2010.

2. Same Lowe, New Approach: Wilson Ramos and Alberto Gonzalez hit back-to-back two-out singles in the bottom of the fourth, but Derek Lowe gets a grounder back to the mound from Yunesky Maya to complete his fourth scoreless frame on the mound against the Nats, which makes 13.0 straight stretching back to his 8.0 shutout innings of work down in Atlanta on September 13th and 1.0 scoreless at the end of an 8/19 start against Washington. Before today's game, D.C. Skipper Jim Riggleman talked about Lowe's approach against the Nats, who'd beaten Lowe in three starts this season before his dominant last outing in Atlanta:

Jim Riggleman: "I think [Lowe] said after [the 8.0 shutout innings] that he felt like the Nationals had gotten to him a little bit in the last few outings that they'd faced him and he's got to change his plan, he's got to attack the hitters in a different way. He threw a l ot more sliders and cut fastballs, he just made an adjustment and sometimes that's what the game is about. Sometimes you've to make an adjustment and he made the adjustment going in before, he and the pitching coach got together and said well, that other thing hasn't been working, let's go this way and he had a great ballgame, one of the best we've seen..."

Q: How hard will it be for the Nats' hitters to adjust to Lowe?

Jim Riggleman: "I think our hitters will have to take that game into consideration and see if he attacks us the same way, or somewhere in between. It becomes real tough to guess with him, I'll tell you that. Because you know his pattern of pitching for years against you and now he does something different, so you just have to get a good ball and hit it, I don't think you can guess with him right now."

1. Maya's Done: After allowing just 1 unearned through 5.0, Maya's out with 1 out in the sixth. A leadoff walk to Martin Prado's followed by a pop-out to right that Adam Kennedy hustles back for, making a web-gem-worthy catch as he falls in the right field grass. One down, but a wild pitch with Derrek Lee up moves Prado to second and he scores when Lee rips a line drive double to left. 2-0 Braves. Nate McLouth follows with a single and Alex Gonzalez makes it 5-0 with one swing, crushing a hanging slider from Maya for a 3-run blast to left. Maya's out after: 5.1 IP, 8 H, 5 R, 4 ER, 3 BB, 1 K, 1 HR, 92 pitches, 62 strikes, 3 groundouts, 8 flyouts. 5-0 Braves. That's how it ends, the Nats are shut out for the 13th time this season, the third time by the Braves, and they drop to 66-89 with the loss. 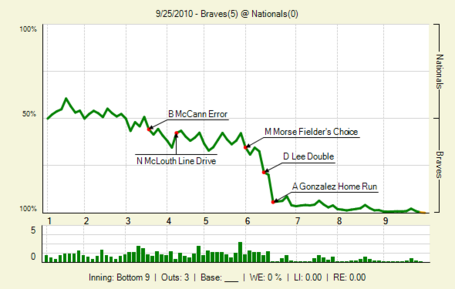