5. Bobby Cox Says Goodbye: 2500-1998 in 29 years as the Atlanta Braves' and Toronto Blue Jays' skipper, Robert Joseph "Bobby" Cox led Atlanta to 5 Pennants and 1 World Series championship after returning for his second stint on the bench with the Braves in 1990 following a 4-year stint in Toronto and some time in Atlanta's front office. The 69-year-old one-time AL Manager of the Year and four-time NL Manager of the Year, is retiring after this season with the 4th highest All-Time win total amongst Major League managers and the All-Time lead in ejections for skippers. The Washington Nationals honored Mr. Cox in a pregame ceremony this afternoon, with outgoing President Stan Kasten, DC Mike Rizzo and Nats' Skipper Jim Riggleman presenting Mr. Cox with a framed American flag which was flown above the U.S. Capitol in his honor. The U.S. Navy Band then marched out of the center field gate and performed for the legendary skipper. Thanks for beating up on the Expos and Nats, Mr. Cox.

4. Morgan Wants His Job BACK!!: Bottom of the first. The Atlanta Braves' rookie right-hander Brandon Beachy issues a one-out walk to Nyjer Morgan, who takes four-straight, then a two-out walk to Pudge Rodriguez to put two men on for Michael Morse. Morse reaches on a grounder to second Omar Infante can't handle and Morgan scores from third. 1-0 Nats. Morgan's next AB comes with one out and the bases loaded in the second after a leadoff walk by Pudge, and singles by Alberto Gonzalez and Danny Espinosa. Morgan fights off a 1-1 curve and slices a single just over short and into the left field grass to bring Pudge in and give the Nats a 2-0 lead on the Braves.

3. E: 124: Livan Hernandez gives up a one-out single to center to Brian McCann, but ATL rookie first baseman Freddie Freeman's grounds to first for what should be an inning-ending DP, Adam Dunn fields and throws to sec--off McCann's shoulder and into left. E: 3. Roger Bernadina throws in to third trying for McCann but it's late and Freeman takes second on the ill-advised attempt. One down, men on second and third for Alex Gonzalez, who pops up. Melky Cabrera lines to left, Bernadina has it, no harm from the E. But it's Dunn's 13th error of 2010, and the Nats' league-leading 124th. Livan's through 4.0 scoreless, 2-0 Nats. Make that 2-1 when Rick Ankiel launches the first pitch of the 5th to center and over the GEICO sign for his 6th HR of the season.

2. Rick Ankiel? Really?: The Braves' center fielder is providing all the offense the Braves need, homering to get Atlanta on the board in the 5th and doubling by first and into right to score Melky Cabrera from second after the Melkman delivered (ugh, Sterling!!) a leadoff double to the right field corner to lead off the seventh. Livan Hernandez is done after the back-to-back two-baggers by the Braves. In his last home start of the season, Mr. National Himself walks off to a nice ovation, having pitched 6.0 innings in which he allows 7 hits, 2 ER and 2 walks while collecting 3 K's and allowing the 1 HR. 93 pitches, 55 strikes, 6 groundouts, 5 flyouts...Sean Burnett comes on and strikes out the first two batters he faces before inducing a grounder that ends the seventh with the score still tied at 2-2.

Jim Riggleman: "He's been unbelievable. Our bullpen in general has just done a great job. But for Burnie to be getting lefties and righties out for us the way he does and to be up as much as we've had him up, we've had him in a lot of games but we've had him up a lot, and I say the thing about [Tyler Clippard] and [Joel Peralta] both of them along with Burnie, they've been asked to do a lot for us and our bullpen has got more innings pitched than anybody in baseball I believe, so for them to be going this strong this late in the year it's really a testament to their preparation and the confidence that they're building."

1. DESI DOES IT!!!: Braves' right-hander Kyle Farnsworth gets the first two outs of the Nats' seventh but then issues back-to-back walks to pinch hitter Willie Harris and Danny Espinosa before he's lifted in favor of ATL lefty Jonny Venters. Nyjer Morgan works his second walk of the day out of Venters to load the bases and bring Ian Desmond to the plate and Desi drives a 94mph 2-1 sinker back up the middle for a two-run single and a 4-2 Nats' lead. Adam Dunn K's to end the inning, but the Nationals are six outs away from a win and a 10-8 mark in the season series with the Braves which they're sure to regret if they do miss the post season...Sean Burnett throws a quick scoreless eighth. Drew Storen's on for the ninth. T he Nats' closer of the future throws a 1-2 slider by Alex Gonzalez for a swinging K!! ONE!! 1-2 slider after the high heat to Melky Cabrera, swinging K no.2!! TWO!!! Rick Ankiel grounds to short on a 2-2 fastball, Desi throws to Adam Kennedy at first, in time! Ballgame!! Nats win. Make that 2,500-1999. Storen's 5th save of the season...

Jim Riggleman: "He had a good inning in a save situation down in Atlanta. He had one rough one in Philadelphia. The one that he pitched here lately wasn't a save situation, it was a widespread game and we kind of limited him what we let him go that day, but there's really been very few hiccups. He went out there today in a tough situation and had outstanding stuff, maybe as good a stuff as we've seen him throw all year. Just a really devastating breaking ball and threw strikes with his fastball, so it's part of the process you go through with a young guy like that, but he's done well." 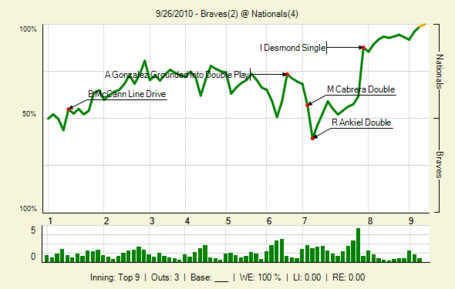