5. Nyjer Morgan - Prototypical Leadoff Man: Maybe the Nyjer Morgan haters have been wrong all along, maybe he is a leadoff man after all. The Nats' center fielder and top of the order bat takes a 5-pitch leadoff walk in the first from the Phillies' righty Roy Oswalt, then steals second an out later with Ian Desmond at the plate. Morgan's caught off second on a grounder back to the mound by Desi, but an errant throw in the rundown allows him to take third while Desi slips in to second, and an Adam Dunn groundout brings the first run in when Morgan scores, 1-0 Nats without a hit. In his second at bat in the third, Morgan takes a one-out walk from Oswalt, but Roger Bernadina and Ian Desmond strand him two outs later.

4. This Is Not The Marquis You Were Looking For: The Nats score a run without a hit, and Jason Marquis holds the Phillies to one baserunner through three, striking out four. Marquis allowed 6 hits and 6 runs in 0.1 IP last time out against Philadelphia in the second start this season in which the Nats' big free agent pick up couldn't make it out of the first, and the Phillies finally get to him tonight in the fourth when Raul Ibanez launches his 16th HR of the season out to right and over the out-of-town scoreboard for the 12th dinger he's hit off the Nats in the last two years. 1-1 game. Back-to-back one-out singles by Ryan Howard and Ben Francisco are followed by a sharp liner off Domonic Brown's bat and off Adam Dunn's outstretched glove, and it's bases loaded with one down. Greg Dobbs' swinging bunt results in a force at the plate and Marquis gets Brian Schneider looking to keep it tied at 1-1 after four...

3. Sign Adam Dunn!! Sign Adam Dunn!!: In the pregame press conference tonight, Nats' Skipper Jim Riggleman was asked if he had any thoughts about the next two games with the Phillies possibly being Adam Dunn's last in DC. According to Mr. Riggleman, he doesn't think that will be the case:

Jim Riggleman: "I don't even think [Dunn leaving] is going to happen, I really don't. I think that with what we've seen from Adam, for me in particular, I've seen him make strides that encourage everybody. This year at first base, this is his first real full year he's played there, I think we've seen improvements lately, I think that I was really encouraged the other day, not that he hit two HR's, but where he hit them, you know, center field and left-center, we saw him do that a couple times last year and I think he's making a commitment that that's what he needs to do, that's what he can do, and just seeing that really encourages me that he's got a future here. I think that Mike [Rizzo] will be talking about that, the Lerner family will be talking about that, but I certainly don't sit here going into the future thinking these last two will be Adam's last games."

The Nats fans in the upper deck are determined to have their voices heard, but the "Sign Adam Dunn" chants are not spreading too far from the section in which it's starting. That could, however, be because the stadium's still full of Phillies fans.

2. Marquis At His Best?: Jason Marquis is out after 6.0 IP in which he allows just 1 ER and 1 walk on 7 hits, striking out 7 and allowing the 1 HR. 100 pitches, 60 for strikes, and the Nats' $15M dollar free agent signing is going to end the season at (2-9) in 12 starts after Tyler Clippard's scoreless seventh in relief makes it a no-decision for the Nats' starter. How about one more Riggleman quote? In today's pregame press conference, the Nationals' manager was asked if he thought Marquis was a sure thing for next year's rotation? Riggleman's response?:

Jim Riggleman: "To me there are no sure things. The competition is trying to get you every day, you've got to try to get them every day, now if he continues to work like he is, I think, I don't know, I don't think anything's for sure, but I think when you look up at the end of the year you'll probably see 180.0-200.0 innings and that he will have had a good year, but that's only going to be because he works at it, it's not going to be because he goes throws his glove out there on the mound and beats the competition, it's going to be because he goes out there and is prepared and works hard and I know he's going to do that." 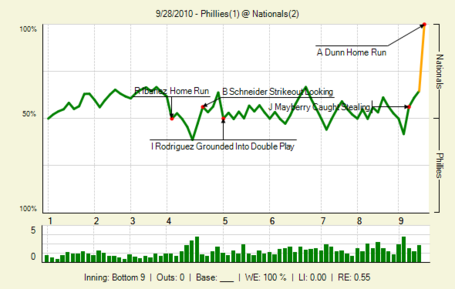