5. Morgan's Appealing: In spite of the fact that he was given an 8-game suspension by Major League Baseball for his role at the center of Wednesday night's bench-clearing brawl with the Marlins and the incidents which preceded and followed the two HBP's and mound visit by Morgan in Sun Life Stadium, the Nats' center fielder is penciled in at the top of the Nationals' order for tonight's game in PNC Park in Pittsburgh, PA. Morgan lines to center in his first at bat, and Pirates' center fielder Andrew McCutchen's sliding catch provides the only drama in what will hopefully be a quiet, successful night at the park for the beleaguered Nats' outfielder. Morgan ends the night 0 for 4.

4. "OPPO-BOPPO!!!" - Bryce Harper: Danny Espinosa gets his first major league start after making his MLB debut on Wednesday night in Florida. In the third at bat in the majors, Espinosa hits his first HR, powering a changeup that's belt-high and outside from Pirates' left-hander Zach Duke over the high right field wall and into the stands to put the Nats up 1-0 in the top of the third. Espino--THE KIDS CALL HIM SPINNER!! is now 2 for 3 with an RBI double and a solo HR in his first three AB's.

3. Setting Up A Comeback?: A double, sac bunt and RBI sac fly get the Pirates on the board in the third. Pirates' shortstop Ronny Cedeno starts things off with a two-bagger off Livan Hernandez before coming around to score the tying run on a sac bunt by Duke and a sac fly by McCutchen. 1-1. That's when the trouble starts. Livan gives up a two-out single to Jose Tabata, who shoots a grounder through second, then Hernadez surrenders a two-out walk to Neil Walker and goes to a full count with Garrett Jones before giving up a line drive double into the left center gap that scores two runs to make it 3-1 Pirates. 4-1 on Ryan Doumit's leadoff HR in the Pirates' fourth.

2. Bad Livan: Hernandez is out in the fifth after giving up back-to-back one-out singles to Jose Tabata and Neil Walker and back-to-back RBI doubles by Garrett Jones and Pedro Alvarez to drive three more runs in and the fourth run of the inning that's Livan's scores on the fifth straight hit for the Pirates, a run-scoring single by Ryan Doumit that puts Pittsburgh up by seven. Livan's Line: 4.1 IP, 8 H, 8 ER, 2 BB, 4 K's, 91 pitches, 50 strikes, 3 groundouts, 5 flyouts. Bad Duke: With the Pirates up 8-1 after a 4-run 5th, Duke gives up a leadoff walk to Ian Desmond and back-to-back singles to Ryan Zimmerman and Adam Dunn, with Dunn's driving in Desmond to make it 8-2 and a base-loading walk to Michael Morse after a mound visit ends the Pirates' lefty's night. Sean Gallagher takes over for Duke and gets a DP grounder (the second DP grounder of the night) from Pudge Rodriguez though he lets a run in, 8-3. Justin Maxwell hits a broken-bat liner to left to score Morse. 8-4. And Danny Espinosa comes up batting from the left side and doubles to the left-center gap for the second RBI double of his career on an opposite field blast. 8-5 Pirates when the inning ends. That's 3 for 5 for Espinosa with an opposite field HR and opposite field RBI double tonight after his RBI double in Wednesday night's game.

1. HERO? Danny Espinosa gets chance to make this a truly memorable first start in the eighth when he steps to the plate as the tying run after Pirates' right-hander Chris Resop issues a one-out walk to Adam Dunn and a two-out walk to Willie Harris to put two runners on when the 23-year-old Espinosa comes up. The switch hitting infielder takes two fastballs outside then takes a healthy cut at a third fastball that he swings through for a 2-1 count. Resop misses with a 91 mph heater outside, and gets a generous call on a 3-1 fastball outside. Full count, and Resop challenges and bests Espinosa, getting a swinging K with a belt-high 93mph fastball outside. Espinosa ends the night 2 for 4 with a HR, RBI double and 2 K's. Pirates win 8-5 when Joel Hanrahan closes out the ninth. 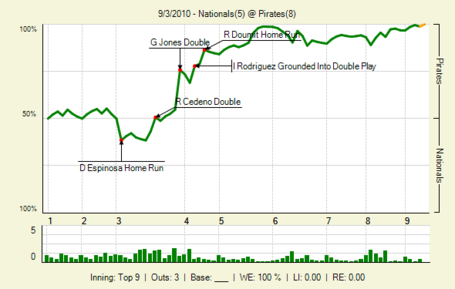