Share All sharing options for: Washington Nationals' Danny Espinosa Earns Curtain Call With 2 HR's, One A Grand Slam In 13-3 Nats' Win Over The New York Mets.

5. 37-Pitch First, E: 107: It isn't just the one-out grounder that Nats' shortstop Danny Espinosa boots (E: 1, 107) that costs Jordan Zimmermann in the first, though it does make the two runs he surrenders unearned. The Nats' right-hander gives up a leadoff single to Angel Pagan, who steals second and scores on a sac fly by David Wright after the Espinosa E on Chris Carter's grounder gives the Mets runners on first and third with one down in the first. Zimmermann gives up three straight walks, the first two load the bases and the third forces one in, 2-0 Mets after the first. Zimmermann needs 37 pitches to get through the first, which means a short night for the Nats' right-hander.

Asked in the post game interview if the error by Espinosa had unnerved Zimmermann, Nats' Skipper Jim Riggleman said he didn't think the right-hander was shook:

3. PUDGE TIES IT!!: Mets' right-hander Mike Pelfrey issues back-to-back one-out walks to Adam Dunn and Roger Bernadina in the Nats' fourth, and that brings the Nats' future Hall of Fame catcher Pudge Rodriguez to the plate. Mets' right fielder Chris Carter's playing shallow with the slow-footed veteran up, and Pudge makes him pay with a line drive to right and over Carter's head, Dunn scores. Bernadina scores, 3-3 game. Michael Morse lines to center in the next AB to score Pudge, 4-3 Nats. And 5-3 on a two-out RBI single by Nyjer Morgan that scores Morse. Pelfrey's done.

2. Olsen Out Of The Pen: Pitching out of the bullpen for the first time since his second major league appearance back on June 30, 2005, Nats' lefty Scott Olsen, who was bumped from the rotation after a few uninspired starts so that Yunesky Maya can make his MLB debut tomorrow in Washington, D.C., throws 4.0 scoreless in relief of Nats' righty Jordan Zimmmermann. Zimmermann lasts just 4.0 innings and gives up 3 runs, 1 ER and 4 walks. Olsen takes over in the fifth with the Nats up 6-3, and holds NY hitless and scoreless over the next four innings as the Nats pile on the runs.

1. GRAND SPINNER SLAM!!!: The Nationals are already up 7-3 after Danny Espinosa's RBI single in the fifth scores Roger Bernadina from third. 7-3 Nats after five on Espinosa's second RBI of the game following his third inning blast. Mets' right-hander Ryota Igarashi gives up a leadoff double to Adam Kennedy and back-to-back one-out walks to load the bases for Pudge Rodriguez, whose sac fly to right makes it 8-3 Nats. Igarashi walks Michael Morse and the bases are loaded again when Danny Espinosa steps in. Igarashi misses with a curve and comes back in with a 1-0 fastball that Espinosa launches to right and GONE!! Off the facade of the first deck! Grand Slam!!! Espinosa's first multi-HR game and his 3rd HR since being called up to DC. 12-3 Nats. And the rookie infielder takes a curtain call, the second rookie to do so this season. 12-3 Nats on Espinosa's 4th, 5th and 6th RBI's of the game.

Asked for his thoughts on Espinosa's afternoon, Nats' Skipper Jim Riggleman said, "It's one of those days where you really feel good about the direction the organization is going, you know, Zimmermann's out there, young athletic guys are out there, everybody's swinging the bat...It was a good day. It's a statement for the organization that, as we say, "there is light at the end of the tunnel."

• Miss The Game? Go Watch IT NOW!! The DC Faithful Were Watching... 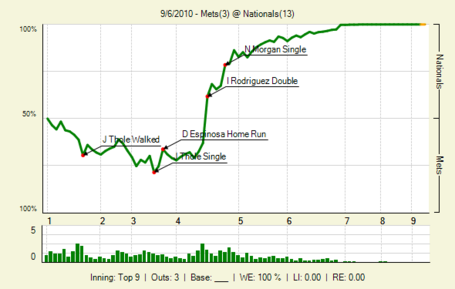