5. Yunesky Maya's Debut: The MLB debut of Cuban-born starter Yunesky Maya probably didn't go as he envisioned it when he dreamt of becoming a major league pitcher. After signing a 4-year/$8 million dollar deal on July 31st, Maya makes his first appearance in DC a year after his defection from Cuba in September 2009. The 29-year-old right-hander got the first out of his career in the majors on a sharp one-hopper to Nats' first baseman Adam Dunn off Angel Pagan's bat, but the next three batters reached base, or, more accurately, the first two reached and the third ran around them. Ike Davis takes a 90mph 1-0 fastball to deep center and GONE, into the second deck above the Snyder's Pretzels sign for a 3-run HR. The Mets' 23-year-old rookie hits his 18th HR off the Nats' 29-year-old rookie. 3-0 Mets. A one-out walk to Mike Hessman follows, before Maya gets his first DP grounder out of Lucas Duda to end Maya's first inning on the mound in the majors.

4. Gee Whiz: Mets' right-hander Dillon Gee, an '07 21st Round pick out of the University of Texas at Arlington, needs just 9 pitches to get through the bottom of the first, and after Maya gives up a one-out double to left by Ruben Tejada in the second, the Mets' starter collects his first RBI when he lines to center to score Tejada from second and put the Mets up 4-0 after two. Gee sends the first seven batters he faces back to the dugout before issuing a one-out walk to Wilson Ramos in the third, but after a sac bunt by Maya, Gee gets a grounder from Nyjer Morgan to end his third inning on the mound without a hit allowed.

3. 11 of 12: After Dillon Gee's RBI single in the second, Yunesky Maya settles down, retiring 11 of the next 12 batters batters he faces in three scoreless innings, allowing only one base runner after the second on a one-out walk to Ike Davis in the third, and after the fifth, Maya's debut ends when Ross Detwiler, who was called up to DC today, (along with Maya and right-handed reliever Joe Bisenius) takes over for the Nats' right-hander. Maya's Debut Line: 5.0 IP, 5 H, 4 R, 4 ER, 2 BB, 3 K's, 1 HR, 87 pitches, 58 strikes, 5 GO, 6 FO...The Mets' rookie starter has a no-hitter through five...but then...

2. TAWH!!: The Mets must hate Willie Harris!! But the Nats' bench bat and backup outfielder isn't ending games with diving catches tonight like he did earlier this season in Shea Citi Field, or running through the scoreboard like he attempted yesterday, tonight he's breaking up no-hitters. Willie Harris pulls a 1-0 fastball to right and over the out-of-town scoreboard to get the Nats on the scoreboard, 4-1 Mets after six on Harris' 8th HR of 2010 and the first hit allowed by Gee is a HR.

1. 2 Hits?: Kevin Mench comes off the bench and lines a single over Ruben Tejada's outstretched glove and into left in the seventh, but that's all the Nats manage through eight. Mets' closer Hisanori Takahashi gives up the third hit of the game by the Nats when he surrenders a leadoff infield single to Ryan Zimmerman in the bottom of the ninth. Adam Dunn K's looking at a called strike three that looks outside to me...and Dunn...but not the Ump. Alberto Gonzalez gets the Nats' fourth hit, singling to center with one down. Zim takes third, first and third for Pudge, who provides DP grounder number twenty-four of 2010 to the Mets. Ballgame. Mets win 4-1. The Nats' 3-game win-streak is snapped, and for the 7th time this season, Washington fails in their attempt to win four-in-a-row. 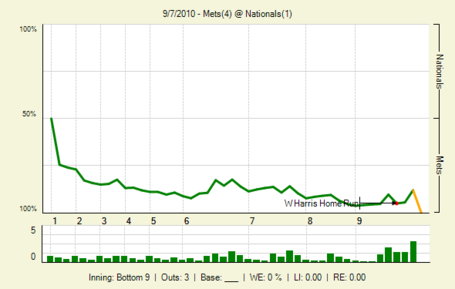