Washington Nationals Drop Two Of Three To NY in DC...

2-0 NY: Nats' center fielder Nyjer Morgan ends up over-running a liner to center from Luis Hernandez off Livan Hernandez that takes an odd bounce in the outfield grass and becomes an RBI double after New York gets back-to-back singles from Mets’ pitcher R.A. Dickey, who scores on the play and outfielder Angel Pagan, who moves to third on Hernandez hit off the Nats' right-hander and Pagan scores on a sac fly to left from Carlos Beltran to make it 2-0 Mets after three...

WILSON!!!: Wilson Ramos’ second hit as a National is the Nats’ first hit of the game off R.A. Dickey, and it comes with with one out in the third, a day after debuting Mets' starter Dillon Gee held Washington hitless through 5.0 last night. Ramos, who’s starting in place of a scratched Pudge Rodriguez, (generic "Illness"), hustles to beat out a throw in to second from Carlos Beltran on the Nats' first hit today, and the 23-year-old catcher moves to third on a groundout by Livan Hernandez, but is stranded when Nyjer Morgan’s groundout ends the inning.

WIL....SON!!!: Ramos ties it with a looong HR (his first in the majors) that goes out to center and up into the batter's eye grass where only Zim (OK and Desmond) really hits'em, 2-2 tie on the two-run HR one out after Mike Morse’s one-out fifth inning single. Livan Hernandez issues a leadoff walk in the Mets’ sixth then gets back-to-back backwards K’s from Ike Davis and David Wright before popping up "The Animal" Chris Carter to end the inning with the score still tied at 2-2.

RISP FAIL!!!: Nyjer Morgan drops a bunt in front of home and the Mets’ starter R.A. Dickey calls off the catcher and falls while throwing to first, so it’s late and Morgan’s on. Ian Desmond fails at two bunt attemps, but Dickey throws a wild pitch by NY backstop Josh Thole to advance the runner himself. Desmond grounds back to the mound for the first out, Morgan stays put. Dickey hits Zim with a knuckler to set Adam Dunn up with two on, one out, and then the Mets’ starter goes 3-0 to the Nats’ big middle-of-the-order bat. Dunn rips a sharp liner to right and Morgan slows up and stays at third. (What?) Bases loaded for Roger Bernadina, who pops an 0-2 pitch up foul of third, so it’s up to Michael Morse. Morse grounds weakly to Tejada at short, and the Mets’ knuckler works his way out of a bases-loaded one-out jam. Still 2-2 after six.

Mr. National: Livan Hernandez is lifted after giving up his second-straight leadoff walk to Josh Thole in the seventh and a sac bunt to Mets' SS Ruben Tejada. Sean Burnett comes on to face left-handed hitting pinch hitter Lucas Duda, who replaces Dickey after (6.0 IP, 5 H, 2ER, 1 K) and Mets’ skipper Jerry Manuel counters by replacing Duda with right-handed hitting Nick Evans. Evan hits a broken-bat liner toward first and Adam Dunn lets the sharp one-hopper skip by him and into right and Livan's leadoff walk comes around to score and give the NY Mets a 3-2 lead.

E: 108: is a 2-out error by Ryan Zimmerman on a sharp grounder by David Wright in the eighth, and it's E: 15 on the season by the Nats’ Gold Glove third baseman. Wright returns the favor in the bottom of the inning on a sharp grounder to third by Ian Desmond that’s rule an infield hit when Wright can’t make the play. Ryan Zimmerman follows in the next at bat, with a double play grounder to shor--the throw to first is high and pulls Ike Davis off the bag. Zim’s safe. Desmond out on the force at second. Adam Dunn vs Pedro Feliciano with 1 on and 2 out. Feliciano goes 3-0 to Dunn, gets a called strike, 3-1, swinging strike, 3-2, and Dunn grounds into the shift to end the threat.

First Road Rubber Match? Really?: Hisanori Takahashi gets a groundout to third from Alberto Gonzalez. Michael Morse K’s swinging at a two-strike change. Danny Espinosa lines to left and deep and foul!! NO!! Espinosa's almost the HERO again. 1-2 count after Espinosa nearly ties it. That pitch from Takahasi brings the catcher out for a visit. Takahashi gets a groundout from Espo to short to end it, and the Mets win a rubber match on the road for the first time this season according to the Mets’ radio announce team. They were 0-7 in road rubber matches in 2010 before today... 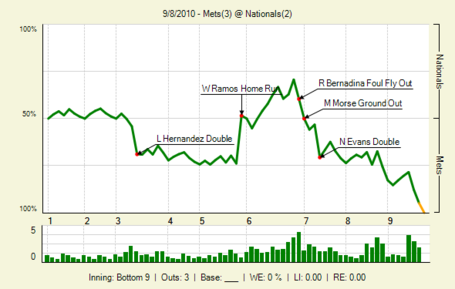