5. Mike Rizzo: "I just want to thank all the fans in D.C., the best fan base in all of baseball."  A not-quite-sold-out crowd of 39,055 was still filing in to Nationals Park down Half Street from the Navy Yard Metro station when the 2011 season officially began. The first pitch of 2011 is an 81 mph "fastball" from Nats' right-hander Livan Hernandez to Braves' left-fielder Martin Prado for a called strike at 1:11 pm EDT. Livan gets a weak grounder back to the mound for the first out of the year, but one out later Chipper Jones hits a two-out double to right on a full-count pitch from Hernandez and Jones scores when Brian McCann strokes an RBI single to right-center for the first run against of the 2011 campaign. 1-0 Braves after one...

4. Jayson Werth: The plan batting Jayson Werth second is to have someone on base in front of Ryan Zimmerman more often this season than the Nats did last year, and in the Nats' new right fielder's first at bat at least, the plan works. The Nats' first hit of the year (after Ian Desmond K'd looking in the first Nationals' AB) is a single up the middle by Werth, who receives a loud ovation from the hometown crowd. Asked about batting second in an MLB Network Radio interview last week, Werth told the show's hosts he looked forward to getting on base in front of Ryan Zimmerman and, "...scoring from first on doubles and scoring from second on singles and things like that," the sort of first-to-third, second-to-home stuff D.C. GM Mike Rizzo was counting on when he built this year's Nats. Werth goes first to third when Zimmerman shoots a one-out single through second, but both runners are stranded when Adam LaRoche pops out and Michael Morse hits a dribbler to short, still 1-0 Braves.

3. Who's This Heyward Guy?: 2-1 fastball up high and outside to Jason Heyward, GONE! Jayson Werth tracks it to the wall and watches it fall into the first row of seats above the out-of-town scoreboard. Solo shot, 2-0 Atlanta. Livan Hernandez comes back with two scoreless dropping cartoon curves on everyone. Nate McLouth stares at a called strike three in the third. Dan Uggla has his knees buckle as he swings way out in front of a 60 mph bender before it arrives at home. Jason Heyward gets one too after the home plate ump squeezes Livan into a full count, and Heyward K's looking to end the Braves' fourth. Still 2-0 ATL. Atlanta starter Derek Lowe is dominating the Nats, however, giving up a single in the second and a walk in the fourth, but otherwise keeping the Nats off the bases and the scoreboard.

2. 15 Straight: After allowing the Heyward HR, Livan Hernandez sets fifteen Braves' batters down in a row as he tries to singlehandedly keep the Nats in the game. Derek Lowe's two-out walk in the fourth accounts for the only baserunner the Nats have had since Danny Espinosa's infield single in the second. Ryan Zimmerman works a two-out walk in the sixth and since Lowe's at 105 pitches he's done in spite of the fact that he'd set down thirteen of the last fourteen batters he'd faced. Eric O'Flaherty gives up a sliced single to left by Adam LaRoche, but Michael Morse's sharp grounder to Alex Gonzalez at short ends the sixth, still 2-0 Braves. Livan allows a leadoff single in the Braves' seventh and then a one-out walk and he's done after: 6.1 IP, 4 H, 2 R, 2 ER, 1 HR, 0 BB, 3 K's, 77 pitches, 51 strikes, one runner on when he exits. Doug Slaten walks the left-hander he was brought on to face, so Tyler Clippard comes in to record the last two outs, stranding two and keeping the Nats close.

1. Ian Desmond As Leadoff Man: In an interview on Sirius/XM's MLB Network Radio before this afternoon's game, D.C. GM Mike Rizzo said that the Nats didn't expect Ian Desmond to change his approach at the plate just because he's been put at the top of the order: "We're not going to change his approach, he's not going to be the prototypical leadoff hitter we're going to ask to see 5-6 pitchers per at bat." Desmond saw eight pitches total as he struck out in his first two at bats against Derek Lowe. Desmond grounded out in his third and fourth trips to the plate to end his debut as the Nats' leadoff hitter 0 for 4 with 2 K's.

Asked in the post game press conference what he thought of Desmond's 2011 debut at the top of the order, Nats' Skipper Jim Riggleman said, "I think it was more just the quality of the pitches. He was composed and everything, he just...Lowe was just outstanding and they really didn't make any mistakes pitching. Anybody probably first game is going to have some of that going on, but I don't think it was a determining factor." Asked how long the Nats would stick with Desmond and Werth one and two in order, or how long, in general, they'd stick with any lineup configuration that doesn't produce, Riggleman said, "I don't know that it was going to make a difference who hit where the way [Derek] Lowe was pitching today. When you really pitch good, you shut down good hitting. I think we have a good hitting ballclub, but good pitching shut us down today."

Shut down and shut out. Braves win, 2-0 final. Danny Espinosa's 2 for 3 with a double. Jayson Werth, Ryan Zimmerman and Adam LaRoche get a single each, but that's it. 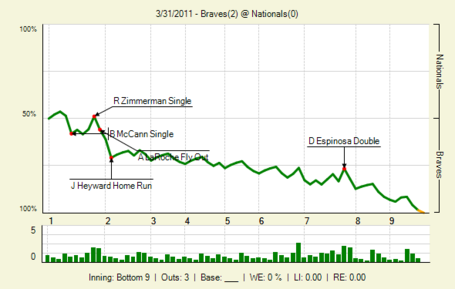