Share All sharing options for: Washington Nationals Shut Out By Cliff Lee, Philadelphia Phillies Take Two Of Three In D.C. With 4-0 Win.

5. During the "introductory" press conference announcing his return to Philadelphia on a 5-year/$120 million dollar deal this winter, Phillies' lefty Cliff Lee was quoted responding to a question about his friend Jayson Werth's reaction to Lee signing on to return to the Phillies after Werth had signed for 7-years/$126 million with Washington. "When [Werth] found out I was coming here," Lee said, "he wasn't the happiest person in the world." The full text of Lee's response from the press conference was transcribed on Philly Sports Daily.com:

"Q. Cliff, did you talk to Jayson at all?

"Cliff Lee: 'Yeah. I don’t know if I can say exactly how that conversation went down here, to be honest with you. I know once we both got on the free agent market, we talked about trying to get on the same team. Obviously when he signed with the Nationals and I signed here, it didn’t happen. When he found out I was coming here, he wasn’t the happiest person in the world. I’ll put it that way (smiling).'"

Was Werth simply mad that Philly spent for Lee when they wouldn't meet his demands? Had Lee and Werth talked about both coming to D.C.? Earlier in the day, (both players had their press conferences on the same day), Werth had been asked about Lee, and the new Nats' right fielder responded by asking, "I missed that in Philly. What happened?" Werth went on to say, "They got their boy back, I guess. That’s fine. I think that’s good. I like that. If you’re going to be the best, you’ve got to beat the best. They make their plays, and we’re going to make ours."

Werth's first at bat of the night, after a scoreless top of the first by Nats' righty-hander Jordan Zimmermann, is Werth's fifth career AB against the Phillies' lefty, and it comes with two down in the bottom of the frame. Lee throws a 1-2 cutter to his former teammate to get a swinging K. 1-2-3 inning for each starter in the first.

4. Zimmermann vs Lee: Jordan Zimmermann gets five groundouts to start his third outing of the season, then he throws a 1-2 fastball by Raul Ibanez, who's now 1 for 9 with 3 K's in two games+ for the Phillies in D.C. Cliff Lee returns to the mound for a quick 1-2-3 second, getting a fly to center by LaRoche, a backwards K on Wilson Ramos and a groundout to second by Michael Morse for the second scoreless frame in which no one has reached base.

Zimmermann's fastball is consistently 94-95 and his slider's ten mph an hour slower and sharp. The Nats' right-hander gets a called strike three from Carlos Ruiz with a 2-2 slider that buckles the catcher's knees. Wilson Valdez flies to right, and Cliff Lee battles in a six-pitch AB before he K's. Zim's 3rd K in three scoreless and he's used just 33 pitches.

3. Running on Contact: Danny Espinosa doubles off Cliff Lee to start the third with the first hit of the night by either team. Jerry Hairston shakes off a foul ball that connects with his shin and gets a successful sac fly to center that allows Espinosa to advance to third. Jordan Zimmermann's up with Ian Desmond on deck, and for some reason Espinosa's running on contact with the pitcher swinging away and Jimmy Rollins makes an easy play throwing home on a sharp grounder to short to beat Espinosa to the plate by three steps. Ian Desmond K's looking to end the third.

2. 12 for 12: Jordan Zimmermann's through four scoreless after he gets the sixth groundout of the night to start the frame before striking Placido Polanco out with a 95-mph-late-moving heater that jumps inside on the Phillies' infielder for a called strike three. Jimmy Rollins lines out to Adam LaRoche at first, 46 pitches, 34 strikes. Zimmermann sets 12 down in order. After a quick top of the 5th, Jordan Zimmermann gets the first out of the bottom of the frame with one pitch to Ryan Howard, who flies to center for out no.13. Jayson Werth makes an awkward catch on a low liner to right by Ben Francisco, and Zimmermann gets a groundout to second from Raul Ibanez. 15 up, 15 down. 54 pitches, 40 strikes.

1. Forget Chooch, Ramos Is Teh Future: WIlson Ramos hits a broken-bat single to left for the Nats' second hit of the night off of Cliff Lee, but the Nationals run into another out. Michael Morse works the count full in an eight-pitch at bat, but then strikes out swinging with the catcher running and Phillies' second baseman Wilson Valdez is waiting for Ramos to complete the strike'em out, throw'em out double play. Two runners for the Nats, both of them thrown out running on contact.

0. 15 for 16: Jordan Zimmermann hangs a slider up for Carlos Ruiz, and the man they call Chooch hits a line drive to left and off the top of the wall for what's ruled a HR on the first hit of the night off of the Nats' right-hander. 1-0 Philadelphia. The second hit of the night comes two outs later when Shane Victorino doubles to left. A throwing error by Jerry Hairston on a sharp grounder by Placido Polanco to third allows Victorino to cross and make it 2-0 Phillies. Cliff Lee gets the first out of the sixth with one pitch to Jerry Hairston, who flies to center, and Zimmermann and Desmond both go down swinging to give Lee six scoreless. 3 K's in 3 AB's for Desi.

-1. Lee Racks Up K's: Cliff Lee abuses Rick Ankiel and gets a swinging K to start the seventh. That's Lee's 8th K of the night. Two-strike curve to Werth. That's 9 K's, four-straight swinging. LaRoche goes down swinging at a 72 mph 0-2 curve that follows a 92 mph fastball. 10 K's for Lee, five swinging in a row...Lee comes up to bat with two men on after a leadoff single by Carlos Ruiz and a line drive to center by Wilson Valdez. Lee gets the infield moving when he squares to bunt, but he pulls back and swings, connecting on a grounder to second that Espinosa drops thinking double play before he has it. Everyone's safe. Jordan Zimmermann's done. Drew Storen drops an 0-2 slider on Shane Victorino for the first out, but Placido Polanco's grounder up the middle scores a run in spite of a sliding play by Espinosa behind second to get the force. 3-0 Phillies, and 4-0 on a Jimmy Rollins' RBI single.

-2. Jesus [Flores] Returns: Cliff Lee gets back-to-back backwards K's after his only walk of the night starts the eighth and Lee then pops Jerry Hairston up with one pitch for another scoreless frame that leaves him three outs from a complete game...shutout. In his first MLB AB since Sept 12, 2009, Jesus Flores hits an opposite field single to right off Cliff Lee for the Nats' 3rd hit. Ian Desmond lines to right, Ankiel flies to center, and of course it's Jayson Werth vs Cliff Lee with two down. Weak grounder to short and a force at second to end it. 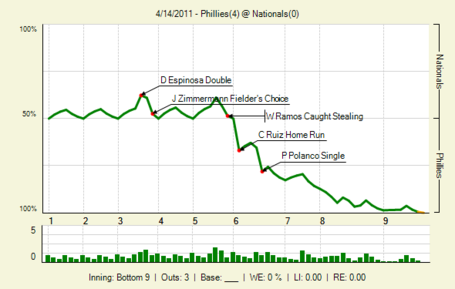