• How It Ends: 1. Arrr-OOOOO!!! Jayson Werth grounds to short for what should be the second out of the tenth for Brewers' left-hander Zack Braddock, but Yuniesky Betancourt's throw to first sails into the basepath and Prince Fielder can't make the catch. Werth takes second on the throwing error and steals third with Adam LaRoche at bat. Five-man infield. LaRoche works the count full and grounds to first, Fielder throws home, too late, Werth scores to win it!!

Riggleman on Werth's effort: "One of the things that we talk about is athleticism and the athleticism that's been added to the club and I think that's a great example right there. Really aggressive to take second base to begin with, because the ball gets away, I've seen a lot of players just hesitate to go and then not go. He's at second, then he aggressively steals third, he gets a great jump on a ground ball with the infield in and scores a run."

"I think wearing no.42 is a direct representation of what came before us and that we have to respect the game and no matter what happens, we have to always battle through any obstacles that the game throws at us. A lot of times when I'm struggling I think, 'If Jackie [Robinson] can make it through what he did, I can make it through,' so, he gives me the power that I need to make it through 162 and I appreciate everything that he did. It's an honor to wear no. 42." - Ian Demsond from Iam42.com

5. Lineup Changes: Danny Espinosa's at the top of the order, Ian Desmond's been dropped to seventh after struggling in the leadoff spot and Wilson Ramos is catching for the second day in a row. Before the game, Nats' Skipper Jim Riggleman explained why he'd made the changes at the top of the order, saying that he's not worried about Ian Desmond, who entered the game in an 0 for 25 slump at home this season (Desmond's put up a .360/.385/.600 line away from Nats Park). According to Riggleman though, "Desi's doing fine, he's going to go through some times like this just like all of them are and [we're] just trying to take a little tension off the leadoff spot for him."

As for Espinosa leading off, Riggleman says the 23-year-old infielder has, "done it before, quite a bit in the minor leagues, did a little bit for us last year," but the Nationals aren't asking him to change his approach. Ramos, the Nats' Skipper said, is still part of a platoon behind the plate, but the younger catcher will be used against left-handers, (any time the Nats face a left-hander according to Riggleman, who says he likes his power potential against LHP)...while Pudge will get his starts against right-handers.

4. Gorzelanny Starts Strong: After two scoreless in which Nats' lefty Tom Gorzelanny throws 23 pitches, 18 strikes, the Nationals get something started against Brewers' left-hander Chris Narveson when Adam LaRoche works the count full, walks and takes second on a single to right by Wilson Ramos. Another single by Michael Morse and the bases are loaded with no one out. Ian Desmond is quickly down 0-2 and he K's after fouling off a few. (Desi now 0 for 26 at home.) Jerry Hairston works the count full and walks to force a run in and Gorzelanny does the same, taking four straight from Narveson and walking to make it 2-0. A sac fly to left by Danny Espinosa scores Morse from third and it's 3-0 Nats with two down. Rick Ankiel K's to strand two and end the second.

3. MOAR GORZO!!: Gorzelanny gives up a one-out double to former Nats' catcher Wil Nieves in the fifth and then gets Chris Narveson looking for out no.2 in front of Rickie Weeks, but the left-hander gets behind the Brewers' second baseman 1-0 and leaves a fastball up inside that Weeks destroys, sending it to the back of the visitor's bullpen in left and off the Harris Teeter sign for a two-run HR that gets Milwaukee within one at 3-2. Gorzelanny gives up back-to-back two-out walks before escaping the fifth with the Nats' one-run lead in tact. 71 pitches, 43 strikes through five. The Nationals have Tyler Clippard warming, but Gorzelanny needs just 14 pitches to get through the sixth.

2. Bullpen Almost Saves It: Tyler Clippard gives up a leadoff single to Jonathan Lucroy in the Brewers' seventh, but gets a 6-4-3 DP and a swinging K from Rickie Weeks and Carlos Gomez, respectively for a scoreless inning of work. Drew Storen's on for the eighth after the Nationals fail to add to their lead in the bottom of the seventh, and the Nats' 09 1st Round pick gets a groundout from Ryan Braun before hitting Prince Fielder to put the tying run on base. Casey MeGehee follows with a line drive to right and there are two men on with one out. An 83 mph full-count slider outside gets Yuniesky Betancourt chasing, two down. Erick Almonte grounds into a force at second and it's 3-2 Nationals after eight.

Sean Burnett vs Craig Counsell to start the ninth. Fly ball to left, one down. Matt Lucroy K's looking at a 1-2 curve. Two down. Rickie Weeks doubles to center and off the Geico sign with two down. Carlos Gomez is down 0-2 quickly, and Burnett misses outside, then high, 2-2 count and Gomez lines to center to score Weeks from second, 3-3 game, and luckily for Gomez Weeks had already crossed when he gets thrown out at second. Nats up in the ninth...

Ian Desmond's still hitless in 27 at bats at home this season after he walks with one out in the Nats' ninth. Desmond's 5th stolen base puts the winning run on second and Jerry Hairston's groundout moves him to third. Alex Cora takes a 3-1 pitch for ball four and Danny Espinosa's up with two on and two out. Fly ball to left. Extra innings.. 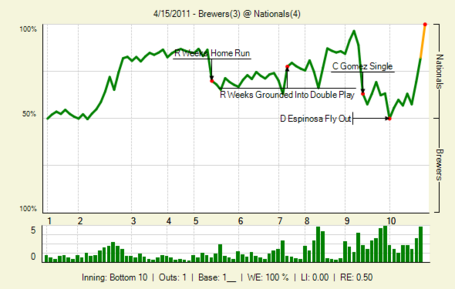