5. ...And it all starts RIGHT NOW...with RIGHT NOW = 35 minutes late: A quick rainstorm delayed the start of today's game, but within twenty minutes former CNN talk show host Larry King, wrapped tight in a leather jacket, was standing in front of a tarp-covered mound throwing the first pitch to Nats' reliever Tyler Clippard and the aptly-named DC Washington was singing the Star-Spangled Banner to officially start game two of one-sixty-two.

Nats' lefty John Lannan got two quick outs before a first-pitch single by Chipper Jones, but a lineout to left off Brian McCann's bat brought an end to a quick top of the first. Just like he did in the Opener, Jayson Werth got the Nats' offense started with a double to the left-center gap. Ryan Zimmerman moved Werth to third with a flyout to Jason Heyward in the right field corner, but Adam LaRoche hit a grounder back to the mound to end a scoreless first.

4. MOAR GROUNDERS AND MOARSE!: A one-out walk to Jason Heyward in the second, a single by Braves' shortstop Alex Gonzalez and rookie Freddie Freeman is up with two men on. Back-to-back grounders to second follow, and Lannan's through two scoreless in spite of some control issues. Michael Morse is hitless through five AB's this season, but he worked a leadoff walk in the Nats' second, took second when Braves' starter Tommy Hanson throws a pickoff attempt by first, moved to third on a groundout by Rick Ankiel and scored the Nats' first run of 2011 on a sac fly to left-center by Danny Espinosa. 1-0 Nats after two.

3. Glover Work: Danny Espinosa saved John Lannan from putting the leadoff runner on in the third with a slick diving catch on a low liner to second by Martin Prado, but Lannan hit Nate McLouth then threw a wild pitch that allowed him to take second so a Chipper Jones single could drive him in. 1-1 game after two and a half thanks to the Nats' improved infield defense, and then Jayson Werth provides the offense again with a leadoff double that hits the top of the out-of-town scoreboard in right. Ryan Zimmerman took first the hard way, HBP. A flyout to center by LaRoche moved Werth to third, and a broken-bat-sac fly to right by Morse allowed Werth to score and make it 2-1 Nats. Rick Ankiel got hold of a 3-1 pitch from Hanson and just cleared the out-of-town scoreboard in right, 4-1 Nats on Ankiel's two-run blast.

2. :51 mp EDT: The second storm of the afternoon ended Tommy Hanson's outing after 3.2 IP, 5 H, 4 R, 3 ER, 2 BB, 1 K, 1 HR, 68 P, 38 S. After the second rain delay of the day, Jayson Werth came back with a grounder to third on the first pitch from Braves' reliever Cristhian Martinez, and got it under Chipper's glove for a single. First and third when Wilson Ramos moves up from second on the play. Ryan Zimmerman takes a two-out walk to load them up for LaRoche, who grounds weakly to short to end the fourth. Still 4-1 Nationals.

1. One of Us: Nats' right-hander Chad Gaudin's first regular season pitch in a Nationals uniform is launched to left and just over the wall out of Michael Morse's reach. It's almost a tradition amongst Nats' relievers with Sean Burnett, Drew Storen and others all having surrendered HR's in their first AB's (Storen in the Minors). Gaudin pops Jason Heyward up for the first out but after a walk to Alex Gonzalez, Gaudin's lifted. Doug Slaten replaces Gaudin and gives up a double to Freddie Freeman that twists Jayson Werth up in left. Werth's back near the wall when it falls in front of the track, and Slaten's done. Second and third for Brooks Conrad. Tyler Clippard, the third pitcher of the inning gets strike three swinging. Martin Prado flies to left, 4-2 Nats after five.

0. The Stolen Base That Wasn't: Wilson Ramos' bloop single to right in the sixth made him 3 for 3 in his 2011 debut, and he stole second as Laynce Nix K'd for what would have been the #Nats' backstop's first stolen base, and his seventh as a pro, but catcher's interference is called when Nix' backswing connects with McCann's glove, and Ramos will have to try to earn his first SB another time...

-1. 21, 941: Just under 22,000 fans bought tickets to come to Nats Park on Saturday afternoon, but after two rain delays, there were far less people in the seats when Tyler Clippard comes back out for the seventh. A leadoff single by Nate McLouth was erased by a Chipper Jones' DP grounder, and a two-out single by Brian McCann amounted to nothing when Clippard got a flyout to left from Dan Uggla to end the Braves' seventh. Ryan Zimmerman tripled for the first time since September 4th 2009, but Adam LaRoche came up empty in another RBI opportunity and the Braves' put pinch hitter Jerry Hairston on to set up the double play. First and third with Rick Ankiel up, and he drops a bunt in front of home...Suicide Squeeze! Zim scores from third, 5-2 Nats! [Riggleman points to gut!!!]

• Postgame Note: Riggleman on the Squeeze: How comfortable are you with asking players on this roster to do something like that?

Jim Riggleman: "We got comfortable with it in Spring Training. We talked about some situations like that in Spring Training with [Ankiel], pointing out some times where not only a squeeze, but some bunt-for-base-hit situations that could be available to us, and several guys, so we know that they're going to be thinking that way and they're not going to miss a sign there hopefully. They're good baseball players. We've got a good athletic team that's got a lot of good baseball players, maybe not blazing speed, but we've got good baserunners. We can hit some balls in the gaps, occasionally get one out of the ballpark like Ankiel did today, but all those things, when you play good defense like we did it makes you feel better about yourself as a ballclub."

-2. STOREN WARNING!!: Nats' closer of the future Drew Storen gave up a one-out solo HR to Alex Gonzalez, who cleared the wall in left and reached the visitor's bullpen for a solo blast. Storen's Spring struggles seem to have followed him north. The '09 1st Round pick struck out Freddie Freeman with a nasty bender, but that was it for the right-hander, who was lifted for Sean Burnett. The Nats' lefty was asked to record a 4-out save this afternoon. Pinch hitter Eric Hinske grounded out weakly to first, LaRoche fielded it and stepped on the bag. 5-3 Nats after seven and a half...

-3. WereWalk: Ian Desmond grounded into a force at second after a one-out single by Laynce Nix started the Nats' eighth. Jayson Werth used his discerning eye to draw a two-out walk, and Ryan Zimmerman had two runners on when he came to the plate against a familiar foe, the side-winding right-hander Peter Moylan. Zim hit RBI single to third and off Chipper's glove, Desmond scored, 6-3 Nats. Adam LaRoche flew out to left, and ended the day 0 for 5 with 9 LOB. Tough day at the plate for the Nats' first baseman.

-4. Jaunty Cap And Quick Glove: Sean Burnett came back out for the ninth. Martin Prado hit one right back to the mound. Nate McLouth got a grounder by Burnett, but Ian Desmond fielded it behind second and threw to first....in time. Two down. Chipper Jones lines back to Burnett, who stabbed it. Ballgame. Nats win, 6-3 final.

• Doghouse's Post Game WPA Graph: "Game 2: Where Have These Nats Been Hiding?" 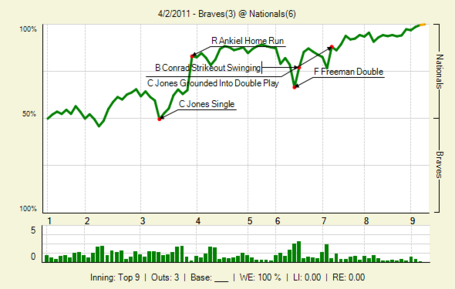