5. Ankiel And St. Louis Lovefest: Former Cardinals' pitcher and outfielder Rick Ankiel received the loudest ovation of the first inning when he stepped to the plate in Busch Stadium in the two-spot with Nats' leadoff man Danny Espinosa already on following a leadoff infield single. In a classy move, the Nats' outfielder took out a full page ad in the local papers here in St. Louis to thank the city for their support over the years he played with the Cardinals.

In his first at bat today, Ankiel flew out to center on a well-struck ball, but it was Jayson Werth, whose single sent Espinosa first to third, and Adam LaRoche, whose RBI groundout allowed Espinosa to score, who got the Nationals out to a 1-0 lead early. Up a run before he even stepped on the mound, Nats' lefty John Lannan gave up a leadoff single to Ryan Theriot and a one-out walk to Albert Pujols, but got through a scoreless first when a line drive from Matt Holliday and a flyout from Lance Berkman, both to Jayson Werth in right, ended the bottom of the first after 18 pitches.

4. Mr. Leadoff: Danny Espinosa reached safely on a one-out infield single in the Nats' third. Rick Ankiel battled Cards' starter Jake Westbrook and earned a walk in an eight-pitch at bat, and Jayson Werth drove in the Nats' second run with a line drive single to left, 2-0 Nationals, and Ankiel beats Matt Holliday's throw in to third, allowing Werth to take second. [Rizzo points to head.] Adam LaRoche walks to load the bases drawing the Cards' pitching coach out to the mound. Ian Desmond takes the first pitch he sees to center for a two-run single, 4-0 Nats. Laynce Nix singles, LaRoche scores, 5-0 Nats. Desi goes first-to-third on Nix's hit, and a double steal brings Desmond home as the Cards throw late to second and then late to the plate. 6-0 Nationals. Make that 7-0 as Pudge Rodriguez drives Nix in with an RBI double. Break up the NATS!!

(@NationalsPR): "The last steal of home in franchise history occurred 5/27/01 (MON at PHI), when Milton Bradley swiped home on a double steal."

2. Cool Hand?: Lannan pitched around Albert Pujols and walked him in the Cards' slugger's first at bat, but with two on and no one out in the third, the Nats' lefty decided to challenge Pujols, who sent a long fly ball to right-center and out of the park for a solo blast that got the Cardinals within six after three at 7-1. Mr. Leadoff Danny Espinosa's 3 for 3 after a leadoff triple to right-center that gets by the range-challenged Lance Berkman. Rick Ankiel pops out and Cards' reliever Fernando Salas gets Jayson Werth swinging and Adam LaRoche looking to strand Espinosa on third. Still 7-1 Nats.

1. Two Mistakes: Just a few seconds after the Cardinals' announce team praises John Lannan's effort this afternoon, mentioning the one mistake he made to Albert Pujols on the first baseman's solo HR, the Nats' lefty gives up the second HR of the day, and his second this season, on an 89 mph full-count fastball to Colby Rasmus that ends up going out to right center, cutting the Nats' lead to five runs at 7-2. Lannan's lifted after allowing a leadoff single in the sixth, but Chad Gaudin comes on and erases the runner when David Freese grounds into a 6-4-3 DP. Lannan's line now that his runner is off the bases: 5.0 IP, 7 H, 2 R, 2 ER, 3 BB, 2 K's, 2 HR's, 101 pitches, 59 strikes, 8/1 GO/FO.

0. E: 6 = Trouble: The right-handed Gaudin replaces Lannan in the sixth with a man on first, and immediately gets the double play. Cards' catcher Gerard Laird battles in a 10-pitch at bat that ends with a ground-rule double to right. Tyler Greene grounds to short for what should have been the final out of the frame if Ian Desmond hadn't booted it, E:6, and a two-out walk to Nick Punto loads the bases for Ryan Theriot, whose RBI single makes it 7-3 Nationals.

Gaudin's lifted for left-hander Doug Slaten. Slaten surrenders a two-run single to left by Colby Rasmus, and it's all-of-a-sudden a 7-5 game. Tying run at the plate, but Tyler Clippard gets a flyout to left from Pujols that lifts the crowd for a moment before falling into Laynce Nix's glove. 7-5 Nats after six.

-1. Rally Clipp'd: Tyler Clippard's back out for the seventh, and the first two Cards he faces reach base. Matt Holliday singles, and after Lance Berkman swings and misses at a 3-0 pitch he takes a walk to put two on with no one out.

Clippard pops David Freese up for the first out. Jon Jay K's looking. Two down. Daniel Descalso goes down swinging, 7-5 Nats after seven. 8-5 Nats after Laynce Nix hits a solo shot off St. Louis' reliever Ryan Franklin with one down in the 8th. Sean Burnett takes over for the Nats in the eighth and gives up back-to-back singles to Mark Hamilton and Ryan Theriot before a 4-6-3 DP leaves a runner on third with two down and Albert Pujols at the plate. Pujols' RBI single makes it 8-6 Nats, and Drew Storen's called on to face Matt Holliday (aka the tying run). A groundout to second ends the eighth, and Storen gets behind 3-0 to the first two batters in the ninth, popping one up and walking the other before recording the second and third outs with the tying run at the plate for his second save of the season.

• Doghouse's Post Game WPA Graph: "Game 16: More interesting than it needed to be": 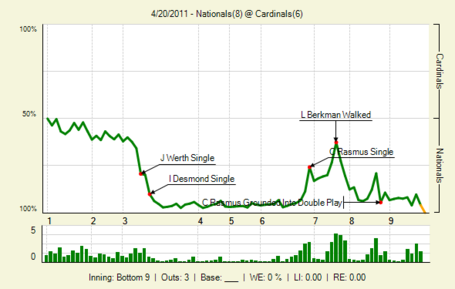 5. 5/2/09: First Meeting: Nationals Park, May 2, 2009. Nats' rookie right-hander Jordan Zimmermann, in his third major league outing, starts Albert Pujols with three straight 93-94 mph heaters outside. It's the reigning NL MVP's first AB of the night, it comes with two down in the first. Pujols swings away at the 3-0 pitch, but comes up empty on a 95 mph knee-high strike on the outside edge. Zimmermann's 3-1 pitch is up in the zone, and as impressive as it is at 95 miles an hour coming in, Pujols deposits it so far back in left it almost clears the seats, landing three rows from the center field concourse in Nats Park. 1-0 Cardinals early. Zimmermann gives up a double to Pujols in their second meeting in the fourth, and Pujols singles to start the sixth, and scores one out later when Ryan Ludwick hits a two-run blast to center that ends up in the patch of grass next to the batter's eye. 6-0 Cardinals...

In five career AB's against Zimmermann, Albert Pujols is 4 for 5 with a double, two HR's and two RBI's. After Zimmermann gave up two hits to Pujols in a Spring Training start earlier this year, he asked rhetorically in front of reporters, as recorded in Washington Post writer Adam Kilgore's article entitled, "Jordan Zimmermann encouraged after first spring training start", what it must be like to be on the other end of their matchups:

"'I just wonder what the ball looks like when it comes in to Pujols, whether he sees a beach ball or what. That's what it seems to be every time I'm out there throwing. I'll have to figure something out.'"

Tonight in St. Louis, the Cards' first baseman comes up for the first time with two down in the first, fouls off a 2-2 slider, takes a fastball outside and then stares at an 81 mph full-count curve that catches the low inside corner of the zone for a called strike three that has the St. Louis slugger chirping at the ump. Zimmermann throws 14 pitches, 11 strikes in the first. It's 1-0 Cards in the third the second time they meet. Pujols takes a 1-1 pitch for a ride to deeeeep center, but Rick Ankiel goes back to get it and Zimmermann's down a run, but up 0-2 on Pujols. Round 3: Zimmermann walks Pujols with two down in the fifth when he misses with a full-count change inside. 0 for 2 with a walk. And Pujols scores the go-ahead and eventual winning run on a two-out single by Lance Berkman.

4. E: 6: Ian Desmond's fourth error of the season led to three runs scoring in this afternoon's game. A seemingly harmless grounder to short by Lance Berkman hits the lip of the grass and jumps on Desi, bouncing of the lip of his glove and rolling into left. Jerry Hairston's effort to retrieve it from the left field grass holds Berkman at first, and Jordan Zimmermann gets a fly ball to right from Yadier Molina and a weak grounder back to the mound from Nick Punto for two scoreless. Desmond's 5th error doesn't hurt the Nats. (ed. note - "The officlal scorer later changes it from an E to a hit. Desi back to 4 E's on the season.")

3. E: 7: Rick Ankiel goes the other way with a fly to left in the Nats' fourth. Matt Holliday runs it down and reaches up to make the catch, but he misses. Ankiel's running out of the box and on third. Jayson Werth grounds weakly to third with Ankiel running on contact and Holliday's error leads to a tie game. 1-1. Zimmermann walks Matt Holliday to start the bottom of the fourth, and Lance Berkman doubles into the left field corner to give the Cards their lead back, 2-1 St. Louis.

2. "Time?": Jerry Hairston, Jr. tries to call for time but it's not granted so he swings anyway and lines a single back up the middle, buzzing Cards' lefty Jaime Garcia on the mound. Jordan Zimmermann bunts Hairston over to third. Danny Espinosa gets behind Garcia 0-2, but lifts a soft liner to center that falls in in front of Colby Rasmus. Hairston scores easily. 3-2 game. Garcia tries to pick Espinosa off and sails the throw to first. Espi takes third and scores on Rick Ankiel's RBI single to right, 3-3 game.

1. Two-Out BB: Albert Pujols fouls a full-count curve off his foot in his third at bat of the night, then takes a 3-2 change inside for a two-out walk. In spite of a limp he takes second on a two-out single by Matt Holliday, who waits on a curve and sends it back up the middle for a single. Two on, two out for Lance Berkman, and he singles up the middle to score Pujols from second and make it 4-3 Cardinals a half-inning after the Nats tie it. Holliday scores on a single by Yadier Molina and it's 5-3 Cards after five.

0. Win Streak Ends: Adam LaRoche walks to start the sixth and he's stranded. Cards' reliever Eduardo Sanchez sets the Nationals down in order in the 7th...and the eighth. Mitchell Boggs gives up a two-out single to Ian Desmond in the ninth, but that's the Nats' only hit after the fifth. Laynce Nix comes to the plate as tying run, but pops out to end the game and the Nationals' four-game win streak. The rubber match with St. Louis is tomorrow with Nats' lefty Tom Gorzelanny vs the Cards' Kyle Lohse. 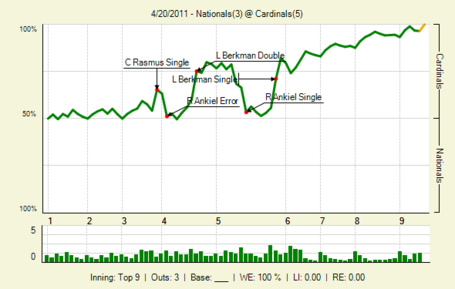