5. No.450: As ESPN.com's Jayson Stark noted yesterday on Twitter (@Jaysonst), Nats' right-hander Livan Hernandez, is one of just five pitchers, along with Derek Lowe, Mark Buerhle, Bronson Arroyo and Javier Vazquez with 10 seasons or more in the Majors who has never made an appearance on the DL. Hernandez tonight makes his 450th consecutive start. Hernandez's first Major League start came on June 15, 1997, a year after a then 22-year-old Hernandez made his MLB debut with 3.0 scoreless innings in relief against the Braves for the Florida Marlins, who'd signed the Cuban-born free agent earlier that year.

Hernandez's first start for the Washington Nationals franchise came back on April 6, 2003 for the Montreal Expos, who'd acquired the right-hander in a deal with the San Francisco Giants in late March of that year. Livan's first start as an Expo was the 182nd of his career. Two years later, when Hernandez pitched the first game ever played by the Washington Nationals after the franchise was relocated, it was the 250th start of his career. Tonight's no. 450 for the 16-year veteran. It almost ends in the first...

4. MOAR RANE!!: Reports from PNC Park said that it never really got stronger than a light drizzle, but the start of tonight's game was delayed for one hour and eleven minutes before Pirates' starter Jeff Karsten's finally took the mound against Nats' leadoff man Danny Espinosa. Espinosa K'd chasing a two-strike curve out of the zone, Rick Ankiel tried to stretch a line drive to left-center into a double but got thrown out at second, and Jayson Werth popped out to right field to give Pittsburgh's starter a quick 9-pitch first.

Livan Hernandez gives up a leadoff line drive to left by Andrew McCutchen, and a double to right by Jose Tabata that lands on the track just out of Jayson Werth's reach. Second and third for Lyle Overbay and he beats the shift with a grounder to second that Danny Espinosa gets to but pockets. 1-0 Pirates when McCutchen crosses. Neil Walker K's swinging, but Garrett Jones works the count full and doubles to right over Werth's head to score two runs with his first hit at home this season. 3-0 Pittsburgh. Ryan Doumit moves Jones to third with a single, then steals second when Ian Desmond drops a throw that has Doumit dead to rights. E: 6, no. 5 on the year for Desmond, and the error gives the Pirates two more runs, one on an RBI groundout by Pedro Alvarez and another on an RBI single by Ronny Cedeno. 5-0 Pirates after one. 31 pitches for Livan Hernandez to get through the first.

3. Response/Answer: Adam LaRoche [who receives boos from the Pirates fans] doubles for the first time this year in the Nats' second, with a leadoff liner to left-center and off the bullpen wall. A groundout to second by Wilson Ramos moves LaRoche to third so Michael Morse's soft fly to right is an RBI single when it falls in in front of Garrett Jones for a hit, 5-1 Pirates. Make that 6-1, as Andrew McCutchen takes a leadoff walk, steals second, takes third on a throwing error by Wilson Ramos and scores on a sac fly to deep right by Jose Tabata.

2. Jayson Werth Giveth And Taketh: Top of the fourth, Jayson Werth turns an 88mph first pitch fastball inside from Karstens around and pulls it out to right field, over the 383 ft sign and ten rows back for the Nats' right fielder's 3rd HR of the year. Pirates' outfielder Jose Tabata singles to center with one down in the Pirates' fourth, and one out later he's picked off first for what should be the third out of the inning. Livan throws to LaRoche, who throws to second, and right by Ian Desmond, who tries to apply the tag before he has it. Tabata takes third as the ball rolls into left center and it looks like Desmond's second error of the game will cost the Nats two runs when Neil Walker flies to deep right field, but Jayson Werth leaps into the wall and makes the catch before crashing!! Werth robs Walker. 6-2 Pirates after four.

1. Blown Call: Jose Tabata's up after Livan Hernandez issues a two-out walk to Andrew McCutchen in the Pirates' sixth. McCutchen runs and Wilson Ramos puts the throw to second right on the bag, in Danny Espinosa's glove and he leaves it there for the runner to slide into, clearly out...to everyone but the Umpire. "Safe!" the Ump yells. Espinosa holds the glove there, shows the ump the ball, but he won't change his mind. The replay shows the Ump was wrong, but the runner's still on, and McCutchen scores from second on a single to left by Lyle Overbay that puts the Pirates up 7-2.

0. Threat Alert?: The Nationals threaten to rally in the seventh. Wilson Ramos doubles to the wall in right. Michael Morse hits an opposite field single to put two on, and Bucs' starter Jeff Karstens is done for the night. Pirates' reliever Chris Resop comes on and strikes Ian Desmond out. One down. Strikes out Jerry Hairston, two down. Matt Stairs grounds out to third, and the two runners on are stranded. Former Nats' lefty Joe Beimel throws a scoreless eighth for the Pirates, and Evan Meek finishes out the 9th. Pirates win, 7-2 final. 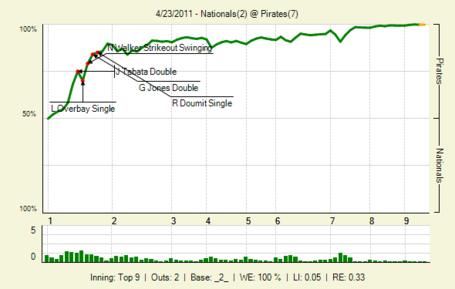