Share All sharing options for: Washington Nationals, With HR's From Michael Morse And Adam LaRoche, Beat Pittsburgh Pirates 6-3 In PNC.

5. Veteran Leadership?: Ian Desmond's sitting after making two errors (his 5th and 6th) last night, and reportedly taking it hard. Alex Cora steps in at short to replace Desi. Jerry Hairston, Jr. is still playing third while the Nationals wait for word on their Gold-Glove-winning, Silver-Slugger-ish Face of the Franchise's recovery from an abdominal strain. Pudge Rodriguez, who's still alternating starts with Wilson Ramos, is behind the plate with Nats' sinker-baller Jason Marquis on the mound. Cora, Hairston and Pudge Rodriguez are a combined 13 for 89 (.146 AVG) with five extra base hits and nine walks between them this season. Will the veteran presence in the infield and behind the plate settle the Nats down? Will Pudge, Cora and Hairston continue to struggle at the plate, or respond to the challenge and end Washington's three-game losing streak?

The vets get their first shot to start something in the second. Michael Morse hits a weak one-out grounder that gets by Lyle Overbay at first for a single and Jerry Hairston follows with a one-out line drive to left to put two on with no one out, but Pudge Rodriguez grounds out to second, and Cora's first-pitch swinging and he grounds back to the mound...Pudge and Hairston both end the day 2 for 4. Cora's 0 for 4 with a run scored, and the bottom of the Nats' order strands seven...Luckily some other bats woke up...

4. 1 for 14: Pirates' second baseman Neil Walker steps to the plate in the bottom of the first with runners on first and third after a leadoff double by Andrew McCutchen, a productive groundout to first by Jose Tabata and a walk to Lyle Overbay. The walk is Marquis' fourth of the year in his 20th inning of work, but only the leadoff double costs him. Neil Walker, who was 0 for his last 13, punches an RBI single through short to score McCutchen, 1-0 Pirates, but Marquis overcomes an odd two-out play by his shortstop to hold PIttsburgh there. Two down, runners on first and second, they're running on a grounder to short, Alex Cora breaks toward second and has to quickly change direction to get to the grounder. Cora gets it, but ends up throwing late to first to let Pittsburgh load the bases before Chris Snyder's groundout ends the first.

3. RISP FAI--MOAR MORSE!!!: Jason Marquis is hitting .375 (3 for 8) after a leadoff single to center off Pirates' right-hander Kevin Correia, and the Nats' starter aggressively goes first to third on a single to center by Danny Espinosa in the next AB. First and third, then second and third with Rick Ankiel up when Espinosa swipes second. Ankiel walks and the bases are loaded with no one out. Jayson Werth's first pitch swinging, and he grounds to third for Pedro Alvarez, who throws home for the force. One down. Adam LaRoche ties it with a groundout to first, and just when it looks like the Nats will get just one run out of a bases-loaded no-out start, Michael Morse rips into a 2-2 fastball from Correia and drives it out to left and GONE! 3-run HR. Morse's first puts the Nats up 4-1 after two and a half. That's Morse's 1st HR in 52 at bats, after the 29-year-old outfielder hit 9 HR's in 66 at bats this Spring.

2. Less BB's: Jason Marquis' second walk of the game, a leadoff walk to Garrett Jones in the Pirates' fourth, is just the fifth of the season for the right-hander who entered today's game with just three in 19.1 IP. Pedro Alvarez follows with a double to right and off the wall, out of Jayson Werth's reach. Second and third, and a sac fly to left by Chris Snyder scores the leadoff walk when Jones tags and beats Michael Morse's throw home. 4-2 Nats. Ronny Cedeno follows with his third double of the year, and second in two games, Alvarez scores, and it's 4-3 Nats after four.

1. Make That 5-3!: Adam LaRoche gets hold of a 2-1 change from Correia to lead off the fifth, and the Nats' left-handed hitting first baseman launches it to right, over the wall and into the stands for a solo shot and a two-run Nats' lead, 5-3. LaRoche's 3rd HR of the year. Jason Marquis gives up back-to-back one-out singles in the Pirates' half of the inning, but back-to-back groundouts end the frame, and the Nationals' streak of 20-straight 5.0-inning outings from their starters is in tact.

0. Play At The Plate!!": Marquis is done after 6.0 IP, 8 H, 3 ER, 2 BB, 2 K's, 100 pitches, 63 strikes, 12 groundouts and three flyouts. Tyler Clippard gives up a two-out single but strikes Garrett Jones out to end a scoreless seventh. Defensive substitution Laynce Nix gives the Nats a three-run lead with an RBI double that scores Alex Cora in the Nationals' eighth to make it 6-3 D.C. Clippard gives up a one-out single in the eighth, but starts a 1-6-3 DP to end the his second scoreless inning. Nats' right-hander Drew Storen throws a 97 mph fastball by Matt Diaz for strike three and the first out of the ninth. Andrew McCutchen reaches on a throwing error by Hairston on a sharp grounder to third, and he takes third on an error by Danny Espinosa, who retrieves Hairston's throw and has it slip out of his hands and into the stands as he goes to throw. One down, two-run lead. Runner on third. Jose Tabata flies to right, Werth catches it coming in, fires a throw home, McCutchen slides, Pudge applies the tag..."YOU'RE OUT!!" Nats win, 6-3 final. 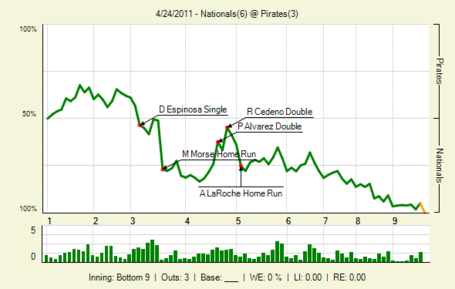