Washington Nationals Drop 4-2 Decision And Series To Paul Maholm And The Pittsburgh Pirates.

Share All sharing options for: Washington Nationals Drop 4-2 Decision And Series To Paul Maholm And The Pittsburgh Pirates.

5. The New One-Two: Tried in the leadoff spot before Danny Espinosa assumed that role, then dropped down in the order to seventh, Ian Desmond finally finds himself back in the two-hole where the then-24-going-on-25-year-old infielder put up a .326/.359/.489 slash line last season. It took RIck Ankiel sitting (for the first time this season) for the Nationals to put Desmond back at the top of the order behind Espinosa, who replaced Desmond hitting first after the Nats' shortstop was asked to fill in for once-presumptive-but-since-traded leadoff man Nyjer Morgan.

Nats' Skipper Jim Riggleman intially told reporters including MASNSports.com's Ben Goessling, as quoted in an article entitled, "Danny Espinosa will bat leadoff for Nationals on Wednesday", that Desmond, who was 9 for 50 through 11 games in the leadoff spot and the 24-year-old Espinosa would share the leadoff duties, "'Whichever one is getting on base a little bit more than the other, is the way we'll go about it," but Espinosa's .284/.364/.484 line overall, and .281/.314/.500 line as the leadoff man seem to have won him the job.

In his first at bat tonight...

after an Espinosa groundout, Desmond takes a 2-0 pitch from Pirates' lefty Paul Maholm back up the middle for a line-drive single to center in front of Jayson Werth, who doubles off the wall, and Adam LaRoche whose RBI single to center drives both runners in, 2-0 Nats after one.

4. WereWerth Robs Wood: New Pirates' infielder Brandon Wood, getting his first start with Pittsburgh after being claimed off waivers from the LA Angels, thinks he has a double off the bat with two down in the bottom of the second, but Jayson Werth covers the distances to the gap and hauls in the final out of the second after having doubled and scored in the Nats' first. In his second at bat of the night, Werth sends a 1-0 change through the right side of the infield, and he's 2 for 2 on the night, (and as FBb's bluelineswinger pointed out) now 2 for 16 this year against LHP.

3. Cool Hand: A leadoff single by Andrew McCutchen in the first is erased by a DP grounder from Jose Tabata. Jayson Werth runs down what could be a two-out double to the right center gap to end the second. Michael Morse pulls a long fly ball to left from Chris Snyder off the top of the wall in the third. A one-out walk in the fourth, however, finally costs Lannan...

The Nats' lefty puts Jose Tabata on when he misses with a full-count fastball low, and one-out later Neil Walker singles to right. Tabata pulls up at third, but Jayson Werth throws through the cutoff man and the ball skips off the infield grass and off catcher Wilson Ramos, by Lannan backing up and into the dugout. Tabata comes home, and it's a throwing error on Werth and a 2-1 Nats' lead, Walker to third on the error... 8:12 Rain Delay...8:32: Lannan comes back to walk the first batter he faces, Pirates' first baseman Steve Pearce, and Brandon Wood gets one into the gap this time. Two runs score, 3-2 Nats. Chris Snyder singles through the right side of the infield, and it's 4-2 Pirates.

2. Nats' O Disappears: Jayson Werth K's looking. LaRoche flies to left. Michael Morse to right. Paul Maholm's through six innings with the lead, and the Pirates' lefty has kept the off the bases completely since giving up a single to Werth and a one-out walk to Adam LaRoche in the third. John Lannan comes back out for the bottom of the sixth and gives up a one-out single to Neil Walker. One out later, Lannan looks like he's out of the inning when he picks Walker off first, but the ump blows the call. A groundout by Brandon Wood should end it, however, but Ian Desmond bobbles it on the exchange and his 7th error of the year puts two on with two out, ending Lannan's night. Todd Coffey strands both runners when he strikes Chris Snyder out with a slider, but the Nats' still trail by two.

1. 16 Straight: The Nats go down in order in the eighth as Pirates' reliever Evan Meek retires the 14-15-16th straight Nationals' hitters. Sean Burnett tilts his cap to the side and retires the Bucs' batters in order in the eighth, so it'll be Jayson Werth, Adam LaRoche and Michael Morse in the ninth for the Nats, who trail by two. One-time Nats' closer Joel Hanrahan takes the hill. Leadoff walk to Werth. Adam LaRoche flies to left. Michael Morse chases an 0-1 slider, and takes an 0-2 bender for a called strike three. Two down. Wilson Ramos keeps hope alive with the Nats' first hit since the third, a line drive single over short. Pinch hitter Rick Ankiel...K's looking. Ballgame. Pittsburgh takes two of three from the Nationals. 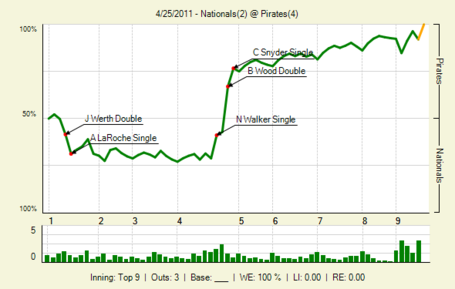