5. Dead Eyes: Jordan Zimmermann gets a backwards K from David Wright with an 0-2 fastball under the chin and then a 1-2 bender over the plate for a called strike three. Two down. Zimmermann's almost through a quick first in spite of a one-out single to center by Danny Murphy when the Nats' 24-year-old '07 2nd Round right-hander leaves a mid-90's 2-0 fastball up inside for Mets' left fielder Carlos Beltran. Long fly to center. Rick Ankiel gets turned around but gets back to make a leaping catch at the wall, ending a scoreless first inning after 12 pitches, eight strikes.

4. Cora's Feelings Hurt: Jason Bay singles through Zimmermann's feet, over the mound to Alex Cora at short, who doesn't bother with a throw. Danny Espinosa had it if the pitcher had avoided the ball, but a slight bounce off his foot (or the rubber) changes the direction just enough. ""And Cora’s really not a shortstop," Mets' SNY announcer Ron Darling chimes in from the broadcast. Ike Davis tucks a double just inside the left field line. Fan interference holds Bay at third, but Josh Thole drives in the Mets' first run with an RBI groundout in the next AB. 1-0 Mets, and then 2-0 when Jason Pridie's singles move Davis to third, an odd decision by Adam LaRoche on a bunt by Chris Young turns it into a safety squeeze and an out at first when LaRoche opts to run by the ball and throw to first instead of going home.

3. [dunnuh, dunnuh] WILLL-SON!!!: Wilson Ramos' first HR of the year comes on a 1-0 fastball low and inside from Mets' starter Chris Young to the right-handed hitting Nats' backstop in his 42nd at bat of the year. Ramos gets the start in back-to-back games and it barely gets a mention while a few weeks back it was a constant topic of discussion. The HR, however has people talking. The 23-year-old backstop lifts a low fastball over the wall and into the visitor's bullpen. 377ft+ to cut the Mets' early 2-0 lead in half. Sound the Sub Horn!! 2-1 Mets after two.

2. Bloody Murph: 0-1 Fastball down the pipe to Danny Murphy to start the Mets' third, and when it lands in right-center the Mets' second baseman is 2 for 2 with a single and now a double. David Wright grounds out to move him over to third, and Carlos Beltran gets a hanging breaking ball that he pulls all the way into the right field corner and just out of Jayson Werth's reach. 3-1 NY. Werth gets an error and Beltran gets third just ahead of the relayed throw from Espinosa. It's still 3-1 Mets after groundouts by Bay and Davis end the third.

1. #AROOOOO ;) Jayson Werth's fourth HR of the year....comes right before WILSON RAMOS' SECOND of the night!!! Fastball knee high and inside from Chris Young and Ramos has his first multiple-HR game in the majors and the first by a Washington National since...

@NationalsPR: "Ramos' multi-homer game is first of his career and first by a National since Danny Espinosa clubbed a pair, September 6, 2010 vs. NYM.

Werth takes a full-count fastball to left and ten rows deep for his fourth HR of the year, and one out later Ramos follows with his third HR in the Majors and second in consecutive AB's, 3-2 Mets after four.

0. RISP: The Nats get back-to-back one-out walks by Jordan Zimmermann and Danny Espinosa in the 5th, but Chris Young gets a fly to center from Rick Ankiel for out no. 2 and Mets' reliever Ryota Igarashi strikes Jayson Werth out with a 1-2 fastball. Still tied at 3-3 after five. Bottom of the sixth. Jordan Zimmermann's chased after back-to-back one-out singles by Jason Bay and Ike Davis. Doug Slaten on to face the Mets' left-handed hitting backstop, Josh Thole goes the other way with an 0-1 slider outside for a two-run double to left that lands just out of a sprinting Mike Morse' reach. Morse went all out and came up empty, Thole comes through where the Nats failed, and it's his first hit of the year against a left-hander. Mets lead 5-3 after six.

-1. The perfect bunt: Jerry Hairston drops a surprise bunt down the third base line and it dies in the grass. Hairston's on with a bunt single. Alex Cora tries to do the same, but ends up with a sac bunt instead when David Wright pounces, barehands and throws to first, in time. Laynce Nix hits for the pitcher, Todd Coffey, or pops out more accurately. So it's up to Danny Espinosa to try to get a run in with a runner on second and two down against Mets' right-hander Taylor Buchholz. Three straight curves and a swinging K. The third Espinosa really chases. 5-3 Mets after seven innings in Nats Park.

-2. DIY Ankiel: Rick Ankiel starts the Nats' eighth with a line drive single to left off veteran right-hander Jason Isringhausen, and Ankiel manages to steal second before Werth flies to right and LaRoche grounds to second. Ankiel advances to third on the LaRoche groundout, and Wilson Ramos has to come through again. Not a HR, but the 23-year-old backstop rips into a 3-1 slider, and punches it through short for an RBI single that makes it 5-4 in the 8th.

-3. Rule 5: Brian Broderick pitches a quick scoreless eighth, but after a bunt single by Jason Pridie starts the frame, Nats' Skipper Jim Riggleman turns to the lefty, Sean Burnett, against left-handed former Nat Willie Harris. Burnett hits Harris, so he has to face a right-handed Jose Reyes. Only Wilson Ramos' alert D keeps Reyes' sac bunt from being a single. Pridie takes third. Burnett hits Daniel Murphy to load the bases for David Wright. RBI single off Burnett on the mound, Espinosa gets the out at first with a great effort, but the Mets are up by two, 6-4. Jerry Hairston's on again as he singles again to start the ninth. Matt Stairs flies out to left. Roger Bernadina lines out to third, and Danny Espinosa's groundout ends it. Francisco Rodriguez gets the save after battling Espinosa for eight pitches. 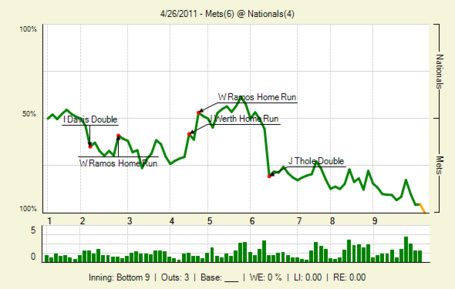