5. Lannan Hates April Showers: The start of tonight's game was delayed for 45 minutes by a storm which was preceded by tornado warnings from local news sources in the nation's capital. They finally roll up the tarp and get started with a 1-2-3 first by Nats' lefty Tom Gorzelanny. Mets' knuckler R.A. Dickey gives up a sharp grounder by first to Jayson Werth who hustles to stretch it into a double and the first hit of the year off Dickey in the first inning. Adam LaRoche K's swinging, and he's 2 for 7 against the knuckler now, Werth's stranded.

4. Harper vs Taillon: While the Washington Nationals and New York Mets were playing in D.C., over in Charleston, West Virginia's Appalachian Power Park, 18-year-old Nats' 2010 no.1 overall pick Bryce Harper crossed paths with 19-year-old, Woodlands, Texas- born right-hander Jameson Taillon, the second overall pick last June by the Pirates, who's making his minor league debut on the mound. Harper walked on five pitches in his first AB against Taillon. But rain ends the big matchup after just one at bat...

3. Spinner to Spinner: Mets' catcher Mike Nickeas spins a low liner out toward second and Nats' second baseman Danny Espinosa dives for it, but he was fooled, took a bad first step and can't catch up to it or catch it, only smother it then recover too late to make a throw. The Mets' starter's bunt moves their catcher to second, and a groundout by their leadoff man moves him to third, so Justin Turner's line drive through second scores the Mets' first run. 1-0 NY after two and a half.

2. WereWerth vs The Knuckler: Jayson Werth's 2 for 2 off R.A. Dickey after his leadoff line drive single to center in the bottom of the fourth. Adam LaRoche is 0 for 2 after he flies to right, but Wilson Ramos is on fire at the plate and in his third-straight start, and he singles through second to send Werth first-to-third, setting Michael Morse up with an RBI opp he converts with a sac fly to the wall in right that ties it. 1-1 game when Werth touches the plate.

1. First-Pitch-Swinging: Rick Ankiel swings at the first pitch in each of his first three at bats against the knuckleballer R.A. Dickey, grounding out to second the first time up, popping out there the second time up, and then lining to left for an RBI single in his third at bat in the fifth to drive Alex Cora in from third two outs after Cora's leadoff single. 2-1 Nationals after five. BTW: That's 23 GS of more than 5.0 IP.

0. 85 Pitches: Tom Gorzelanny gives up a two-out single in the sixth, but gets a groundout from Carlos Beltran to end the inning with the Nats' lead in tact. One out into the seventh, Jayson Werth overruns a line drive to right by Ike Davis and has it bounce off his glove and fall to the grass. E-9 (ed. note - "Later scored a hit."). Gorzelanny's done after 6.1 IP, four hits, one run, one earned, one walk, four K's, 85 pitches, 55 strikes, nine groundouts and three flyouts. Tyler Clippard comes on and pops Willie Harris up with one pitch before striking Mike Nickeas out to end the inning. 2-1 Nats after six and a half.

-1. Baseball Gods Make Good: Mets' shortstop Jose Reyes lines to the left-center gap with one down in the eighth, and he's off to the races, rounding second as Rick Ankiel throws from the wall all...the...way...to...third and just a step late. Reyes slides in head-first and safe, but he's punched out when Jerry Hairston fools the ump into thinking Reyes' arm came off the bag...Reyes loses it, Mets' Skipper Terry Collins too. No one gets tossed out. But there are two down. Clippard leaves a change up on the eighth pitch to pinch hitter Danny Murphy in the next at bat and Murphy launches it to right and GONE! All Werth can do is turn back and watch at the wall. 2-2 tie.

-2. Who's Covering Second?: Adam LaRoche hits a pop fly to left, down the line. Wright rushes back. Bay charges in, slides, and it hits the heel of his glove. LaRoche is running and Danny Murphy doesn't cover the bag, so even if the throw in beat LaRoche he'd be safe. Wilson Ramos tries to get a bunt down (Why? Not sure.) but a passed ball moves the runner up anyway. LaRoche is replaced at third by Bixler and he scores the go-ahead run on a sac fly to center by Ramos. 3-2 Nationals lead after eight.

-3. Things Fall Apart: Danny Espinosa gets to a grounder up the middle by Jason Bay, but there's no play when he losses it on the exchange. Ike Davis lines to left in the next at bat, and Roger Bernadina can't make a diving play. Trapped it. He shows the ump he caught it while Bay hustles to reach second ahead of the throw in. Willie Harris bunts toward third, instead of charging, Hairston runs back toward third, so Burnett has to field it and he throws wide of first. A diving catch by Danny Espinosa saves an error, but the bases are loaded. Chin-lung Hu flies to right for his first RBI as a Met. Bay tags and scores, 3-3. Josh Thole grounds out, but drives a run in, 4-3, and Danny Murphy's two-run double to right blows it wide open. 6-3 Mets. That's how it ends. 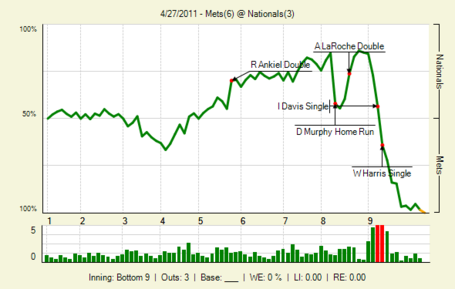