5. The Freak: Nats' Skipper Jim Riggleman admitted before tonight's game that clearly, based on the success that he's had, "nobody's really totally figured out a great plan against [Tim Lincecum]." "But," the Nationals' manager said, "...we've competed pretty good against him in the past, and hopefully we do the same thing tonight." What it is that makes Lincecum so successful Riggleman's not sure, "Whether his velocity and the quality of those pitches is a product of the delivery, or the delivery causes people to get out of sync with their swing, I'm not sure which way it works. But he gets good results."

Lincecum's last outing in the nation's capital took place on June 2, 2009, when the eventual Cy-Young-Award-winner that year gave up eight hits and four runs, two earned in 6.1 IP over which he walked two and K'd seven. The players who hit the Giants' starter hard then (Willie Harris, Adam Dunn, Josh Bard) are no longer with the Nats, and the Nationals on the 2011 roster that will face the right-hander tonight have a combined (.193/.253/.386) slash line with 4 HR's (2 each by Werth and LaRoche) and 28 K's in 95 plate appearances...

Lincecum was not the story tonight, however...

4. "Laynce Is The Mayn" - Doghouse: Wilson Ramos' fly ball to right on the eighth pitch of his first at bat against Lincecum almost causes a bad collision as Giants' center fielder Aaron Rowand and left fielder Cody Ross arrive in the right-center gap at the same time and glance [hard] off each other, but it's enough to jar the ball loose, and the Nats' catcher hustles around to second for what's scored a double. Laynce Nix follows with a long fly ball to right on a 1-2 fastball from the Giants' right-hander and it clears the wall, over the out-of-town scoreboard and GONE! 2-run HR, 2-0 Nats after two.

Jim Riggleman Says: "[Lincecum's] tough on everybody," Riggleman said, "but I think he's particularly tough on right-handers, so we'll see if we can maybe string some hits in there with some left-handed hitters." Inserts Nix.]

3. Marqui-Efficient: Tim Lincecum needs 54 pitches to get through three innings against the Nationals. Nats' right-handed sinker-baller Jason Marquis finishes his fourth scoreless, throwing just 43 pitches. The new-improved loose-body free Marquis allows just three hits through four: Aaron Rowand starts the game with a single, but a sac bunt and two groundouts later he's stranded. Cody Ross singles on a sharp grounder to left in the third, but it takes a Nationals Park bounces off the stands jutting out into left and Laynce Nix nails Ross by (literally) ten feet trying to stretch it into double. Rowand singles again with two down in the fourth, but Marquis gets a groundout from Freddy Sanchez for his fourth scoreless frame.

2. Desi's On Fire: Ian Desmond's 2 for 2 with a double and a single after he starts the Nats' fifth with a grounder up the middle of the infield. Desmond's 9 for 9 on the basepaths after he steals second base, and as the Nats' PR branch points out on Twitter, (@NationalsPR): "It took Ian Desmond only 6 plate appearances to hit for the "cycle" since becoming a father." Last night it was a triple off the wall in left-center and a HR into the visitor's bullpen. Tonight the single and double, and Jason Marquis' RBI line drive to right brings Desmond in from second and makes it a 3-0 Nats' lead. Marquis now hitting .417. After driving in the Nats' third run, Marquis strikes out the side in the Giants' sixth, two backwards and after a two-out double, one swinging. 66 pitches, 45 strikes through 6.0 IP by Marquis.

1. CGSO: The Nationals once again have a starter go at least five innings for the 25th time in 25 starts, and for the second night in a row, following Livan Hernandez's eight-inning outing last night, it looks as if a starter will pitch into the eighth for the second time this season as Jason Marquis hits Buster Posey to start the inning before retiring the next three batters in the seventh to finish the frame with 5 hits, 0 ER, 0 BB's allowed, 6 K's collected and just 79 pitches (53 strikes) thrown. Cody Ross pops out to Desmond behind second. Pinch hitter Mike Fontenot grounds out to second. Aaron Rowand flies to right. 3-0 Nats after eight. Marquis is at 88 pitches when he takes the mound for the ninth. 89 pitches after a weak grounder to third from Freddy Sanchez. Aubrey Huff K's on a pitch in the dirt, Wilson Ramos throws him out at first. Two down. Buster Posey flies to center. CG SO!! Two hours and nine minutes.

• Jim Riggleman on Jayson Marquis: "Pitching controls the game, and he was in complete control tonight."

• Miss The Game? Did you really? What were you doing on Marquis' finest night as a Nat? No Worries. The DC Faithful Were Watching... 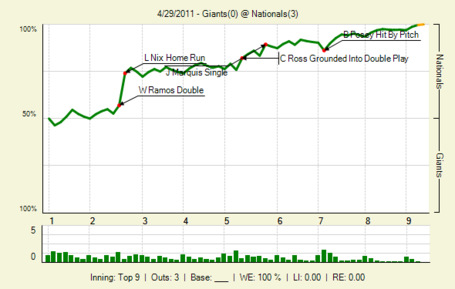