5.  Interference: Nate McLouth was a step ahead of the relay throw back to first by Ian Desmond after Adam LaRoche fielded McLouth's grounder and threw to second for the force on Martin Prado after Prado had singled off Nats' right-hander Jordan Zimmermann to start the Sunday finale of the Nationals and Braves season-opening series in D.C. Espinosa had another chance to turn the DP on a grounder to second by Chipper Jones, but he had to settle for the out at first after he bobbled the ball looking for the double play before it was in his glove. McLouth takes second and scores on a soft fly to short center by Brian McCann that makes it 1-0 Atlanta in the first. Jayson Werth works a one-out walk out of Tim Hudson in the Nats' half of the frame, takes second on a wild pitch with Ryan Zimmerman up and scores one out later on an RBI single by Adam LaRoche. 1-1 after one.

4. Is It More About Longevity?: A leadoff single by Danny Espinosa in the Nats' second is quickly erased by Pudge Rodriguez's DP grounder. The 39-year-old future Hall of Famer catcher's 332nd GIDP leaves him 19 away from the all-time GIDP record, which is currently held by Orioles' Iron Man Cal Ripken, who hit into 350 double plays over the course of his 21-year MLB career. Hammerin' Hank Aaron is second on the list with 328, followed by Carl Carl Yastrzemski 323. Puts Pudge in good company though:

3. E: 1/E: 4: Alex Gonzalez took a 1-0 slider from Jordan Zimmermann to right-center to lead off the third. Jayson Werth and Rick Ankiel tracked it and converged with Werth seemingly calling for it, but it fell to the track just out of the right fielder's reach and Gonzalez slid in safe at third ahead of a wild throw in that went over Ryan Zimmerman to the pitcher backing up behind third. Freddie Freeman followed with an RBI groundout and Atlanta retook the lead at 2-1 in the fifth. Jordan Zimmermann walked the opposing pitcher, Tim Hudson in the next AB, and he scored from first when Martin Prado's fly to right-center eluded the Nats' outfielders again. Werth throws it in as Hudson rounds third, but Danny Espinosa's turning to throw it before it's in his glove, E4 when he drops it, 3-1 ATL when Hudson scores.

2. Things Fall Apart: Todd Coffey sprinting to the mound is bound to become one of the nation's capital's favorite late-game traditions, but his inability to get out of the seventh costs the Nats. After striking out Freddie Freeman and drawing a weak grounder out of the opposing pitcher, the Nats' big right-hander gives up a two-out double to right by Martin Prado and a two-out walk to Nate McLouth before he's replaced by Doug Slaten, who gives up a base-loading walk to Chipper Jones and a two-run single to Brian McCann that makes it 5-1 Braves after seven.

1. Last Win vs Hudson: After striking out both Michael Morse and Rick Ankiel to end the Nats' sixth, Braves' right-hander Tim Hudson's retired 17 Nats in a row after Danny Espinosa led off the second with single that was quickly erased by Pudge Rodriguez's double play grounder. Hudson's done after dominating the Nats for seven innings in which he gives up 3 hits, 1 R, 1 ER and 1 walk while recording 5 K's and throwing 85 pitches, 56 strikes. Jordan Zimmermann still had something left, but the Nats' Skipper Jim Riggleman said that they're going to be cautious with the right-hander who's a year removed from Tommy John surgery, and since the defense wasn't backing him up, he was taken out after 6.0 IP, 4 H, 3 R, 2 ER, 3 BB, 2 K's, 84 pitches and 54 strikes.

0. Brian Broderick's Memorable Debut: Jason Heyward singled through second on the first pitch of Nats' Rule 5 pick Brian Broderick's MLB debut. The former St. Louis Cardinals' prospect, who'd never pitched above Double-A before making the 25-Man roster out of Spring Training, gets a weak grounder to third out of Alex Gonzalez, but Ryan Zimmerman makes an ill-advised attempt to cut down the lead runner at second and Danny Espinosa can't handle it with Heyward bearing down on him. Both runners are safe.

Broderick walks Freddie Freeman to load the bases and then balks in a run with Eric Hinske at the plate when he goes through his motion but fails to throw the pitch. 6-1 Braves. 7-1 on a sac fly by Martin Prado. 8-1 on an RBI double by McLouth and Broderick's debut ends after: 0.2 IP, 2 H, 4 R, 4 ER, 1 BB, 0 K's, 1 Balk, 21 pitches, 10 strikes. Chad Gaudin replaces the rookie right-hander and gives up an RBI double and three straight singles to make it 11-1 Braves after eight. 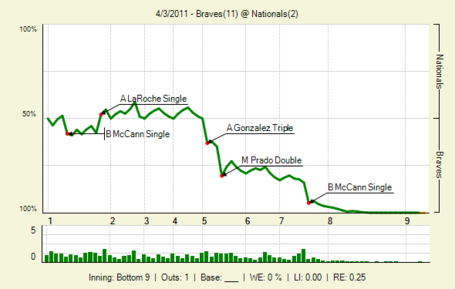 • Miss The Game? The DC Faithful Suffered Through It...