5. Lannan Looks To Keep Streak Going: Left-hander Tom Gorzelanny gave up just five hits, a walk and one earned run over 6.1 IP in his last start this past Wednesday. Livan Hernandez threw 8.0 innings against the New York Mets in the Nats' 4-3 win on Thursday, giving up seven hits and three runs, two earned. Jason Marquis followed with a complete game shutout of the San Francisco Giants last night in which he gave up just five hits. Nats' lefty John Lannan throws today against fellow lefty Jonathan Sanchez. Nationals' manager Jim Riggleman was asked how important it was for the starters to keep going deep into games and building momentum. "Those two things that you're saying right there," Riggleman said, "It's an old phrase in baseball, you know, 'Momentum is as good as your next day's starter.'" Lannan starts the game with a quick 1-2-3 first.

4. MOARSE!!!! Giants' left-hander Jonathan Sanchez can't locate his fastball (or any of his pitches, really) in the first, issuing four walks, three of them with two outs, and the bases are loaded when struggling Nats' right fielder Michael Morse steps up the plate. Through 22 games and 68 at bats, the power-hitting left fielder's 15 for 68 (.221/.263/.279) with just one HR on the year after clobbering nine in 21 games and 66 at bats this Spring, and he's first-pitch-swinging after three straight walks. Groundout to third. Three runners stranded. .217 AVG.

3. 9 For 10: Ian Desmond's hit by a pitch in the Nats' second, after another quick 1-2-3 from John Lannan, but for the first time this year, (in 9 attempts), Desmond's caught stealling by the pitcher, who throws to first, but Giants' shortstop Mike Fontenot drops the throw from Buster Posey, so Desmond's safe anyway. Jerry Hairston takes the fifth walk of the day from Sanchez to put two on with no one out, but Lannan's out on a two-strike bunt attempt.

A wild pitch with Hairston at the plate accomplishes what Lannan couldn't and another HBP loads'em up for Rick Ankiel, who hits a bloop single over short and just off a diving Fontenot's glove, Desmond scores, 1-0 Nats. Jayson Werth, who's hitless in 13 regular season at bats against Sanchez, K's looking, 0 for 14. Adam LaRoche grounds to first. Three runners stranded. Top of the third. John Lannan leaves a 2-1 fastball up for Giants' catcher Eli Whiteside, and it's tied at 1-1 when he goes deep to left and into the visitor's bullpen. Sanchez comes back with a quick 1-2-3 third, striking out two.

2. 3-4-FAIL: Still 1-1 after four and a half. Rick Ankiel starts the Nats' fifth with a double to left for his second hit of the day. Jayson Werth, still in search of his first career hit off Sanchez, grounds out to short, 0 for 15. Adam LaRoche pops up to the catcher. Two down. Wilson Ramos walks. Sanchez's sixth walk of the day. Two on and two outs for Morse. Swinging K to end Sanchez's day after 5.0 IP, 2 H, 1 R, 0 ER, 6 BB, 7 K's, 2 HBP, 103 pitches, 57 strikes, 4/3 GO/FO. Lannan gives up a one-out single to Aaron Rowand, but gets back-to-back groundouts from Freddy Sanchez and Buster Posey and it's tied at 1-1 after six.

1. Bases-Loaded BB: John Lannan issues a leadoff walk to Pat Burrell in the seventh, but pinch runner Darren Ford's thrown out trying to steal second by Nats' backstop Wilson Ramos. Miguel Tejada slides in headfirst at first to beat Lannan to the bag on a grounder to LaRoche, and the move works for a change. One on, one out. Lannan pops up Cody Ross, but Mike Fontenot gets hold of an 0-1 fastball and drives it to deep center, one hop and over the wall. Ground-rule double. Tejada's stopped at third. An intentional walk to Eli Whiteside loads the bases, in spite of the fact that Whitside's a career .155/.197/.207 hitter against LHP, though he did hit one off Lannan today. Lannan goes to a full count with left-handed pinch hitter Aubrey Huff, and misses high with a full-count change to walk in the go-ahead run, 2-1 Giants.

• Nats' Skipper Jim Riggleman explained the decision to walk Whiteside in favor of Huff and his (.275/.328/.429) slash line against lefties in the postgame press conference. "That was one of those ones where, the right thing probably to do was bring [Tyler] Clippard in to face Whiteside," Riggleman explained, "and every now and then you make a decision for your starting pitcher. If I pull John there, he's got a no decision or a loss. If I let him try to work through it, he's got a no-decision or a win...and it didn't work. The right decision to make was to just bring Clippard in and that's the end of that. Whether Clippard gets him or not, that's the way we go with that. I should have done that, that one's on me."

101. Lightning Rod: 99, 98, 97, 98, 99, 99, 97, 98, 99, 100, 86 (slider), 98, 84 (strike three looking)...some are saying Henry "Lightning Rod" Rodriguez hit 101 on the MASN gun, but either way, Henry Rodriguez's Nationals debut was an event that had everyone in Nats Park watching the radar gun. A quick 1-2-3 top of the ninth for the hard-throwing right-hander and then it's the Giants' closer Brian Wilson's turn. The bearded reliever gives up a one-out and a two-out walk and it's Jayson Werth vs Brian Wilson with two runners on. HBP. Werth takes one in the numbers. Adam LaRoche up with the tying run on third. Bases loaded. "Let's Go Nats! Let's Go Nats!" the crown is finally into it...full count. Strike three swinging. LaRoche ends the day 0 for 4 with 8 LOB. Michael Morse - 0 for 3 with 5 LOB. The Nats go 1 for 9 with RISP, strand 12 total and fail to take advantage of the opportunities Jonathan Sanchez gives them.

"We just couldn't quite get over the hump," Riggleman said of the loss. "Sanchez really battled, he threw a lot of pitches and got out of trouble, but we just couldn't push it across." Asked if the squandered opportunities start to get into the player's heads, however, Riggleman said, "No." 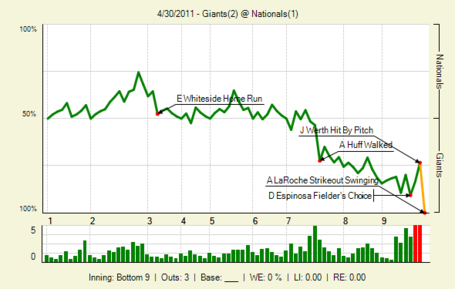