Washington Nationals And WPA: What do those crazy post-game graphs mean?

Share All sharing options for: Washington Nationals And WPA: What do those crazy post-game graphs mean?

I post one after almost every game, with a few selected examples: the Win-Probability Added (WPA) graphs.  What the heck do those things mean, anyway?  In my opinion, WPA is one of the more interesting applications of statistical analysis to baseball.  Instead of being a measure of player talent, WPA is a statistic that tells a story about the game.  WPA charts are a map of how exciting a game was--they allow you to pick out the crucial plays and measure them mathematically.  That's nuts.

Anyhow, I've got a discussion of what WPA is and how you can have some fun reading WPA graphs (whether you're a number-head or not) after the jump!

Something I didn't appreciate about baseball until I started getting into the numbers side is just how much of it there is.  There are about 2,400 games during the regular season alone, every year.  Baseball is also a game that is always in a one of a limited number of well-defined states: the home team is ahead or behind by so many runs, it's a certain inning, there are so many outs, and there are runners on certain bases.  Now it seems like that's a lot of combinations--just looking at configurations of baserunners, outs, and innings there are over 400 states the game can be in at the start of an at-bat.  However, there's so much historical data to go on, that it's possible to calculate what the odds are of one team scoring so many runs more or less than the other team between the current AB and the end of the game.  Combine that with the current score, and you can figure out the probability of winning of game from any starting point.

Now, what we've just discussed is Win Probability (WP), not Win Probability Added (WPA).  At any point in the game, the home team has a certain probability of winning--the WP.  Each play, the win probability will go up or down.  Make an out, and the WP goes down.  Get on base without making an out, and the WP goes up.  The amount the WP changes on each play is the WPA for that play.  Since WP can go down, WPA can be negative.

What are some examples of WP and WPA?

The same play has different WPA depending on the game situation

Stat-heads traditionally focus on numbers that illustrate player talent independent of what's going on in the game.  WPA, however, depends on the game situation.  The same play will be worth different WPA depending on the state of the game.  A nice example is in the Nats-Brewers game on 7/27/09 when Josh Willingham hit two grand slams.  Here's the WPA graph for it. 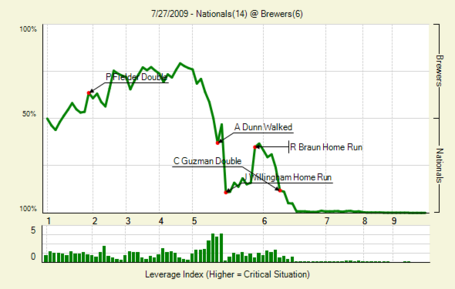 The game was tied in the top of the 5th when the Hammer came to bat.  The base were loaded, so the Nats' WP was 52.9% (tie game = 50% chance to win, but bases loaded means the team has a good chance to score at least one run and go ahead).  After Josh hit the granny, the Nats' WP jumped up to 88.0%--a 4-run lead in the 5th gives you a pretty good chance of winning.  Willingham picked up +35.1% WPA on the hit.  One inning later, the Hammer came to bat with the bases loaded again, with the Nats still having a 4-run lead and now a WP of 94.8%.  After grand slam #2, the WP increased to 99.1%, for +4.7% WPA.  The second grand slam was worth less than a fifth the WPA of the first--it doesn't even warrant a caption on the graph.  Why?  Breaking a tie helps your chance of winning more than increasing a 4-run lead to an 8-run lead.

In junk time, no one can hear your WPA

You see the little bar chart on the bottom of the WPA graph?  That's leverage, which you can think of as a measure of how important the game situation is.  The higher the leverage, the more likely the play can cause a dramatic shift in WP.  Once a team gets a big lead, tacking on or even coming back by a few runs will only make small changes in WP.  If Willingham had hit a third grand slam in that game, it would have been worth less than +0.9% WPA (since the WP was already 99+%, and it only can get up to 100%).

Walkoffs are the biggest WPA plays

The game-winning walkoff is not only the most dramatic thing to see as a fan, it's the biggest WPA play.  A team that's losing will always have less than 50% WP, and the walkoff hit takes them from less than 50% to 100% in one go.  Remember Justin Maxwell's walkoff granny on the home closer in 2009?  Here's the WPA graph. 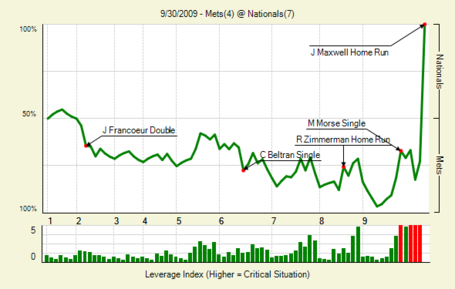 In the bottom of the 9th, the Mets were ahead 4-3.  When J-Max came to bat with the bases loaded and two outs, the Nats had a 28.2% WP.  Take a look at the leverage bar chart on bottom--the red bars mean the leverage is off the charts, and a big-WPA play was imminent.  The walkoff grand slam took the Nats to 100% WP instantly, for +71.8% WPA.  (By the way, Charlie & Dave's call of that AB is an electrifying classic of baseball play-by-play.  Listen here.  It's 7 1/2 minutes and well worth it.)

WPA is fun to play with for telling the story of the game.  You can add up the WPA for each player over the whole game to see who had the biggest impact (or is the most "clutch"--which doesn't exist).  Of course, the circumstance of the game has as much or more to do with WPA as the talent of the player making the play.  Also, keep in mind that every time one team gains WPA, the other team loses the same amount.  The player at bat (or the baserunner for steals and pickoffs) gets the credit/blame for the offense, while the pitcher takes the corresponding blame/credit for every play that takes place while he's pitching.  This means that the pitcher gets credit for things like people being thrown out stealing, but he also gets the blame for fielding errors and passed balls.

Where can you find more WPA?

I always pull the graphs from the invaluable fangraphs.com.  They have an excellent WPA primer with a capsule description and a bunch of links.  And, of course, you can find it here after most games.  I put up the graph and pick out a few players and plays with most WPA (good or bad).  If you have more questions about WPA, put 'em in the comments, and maybe I can talk about it in a future post.