Share All sharing options for: Errors, LOB Doom Washington Nationals In 3-2 Loss To The Florida Marlins.

+2. E: 9 After he'd thrown 18 pitches to four batters in a scoreless ninth in which he surrendered a two-out walk but got three ground ball outs to send the game to extra innings, Nats' right-hander Drew Storen came back out for the tenth and popped Omar Infante up to short right for what should have been the first out of the frame. Danny Espinosa broke back tracking it, but Jayson Werth called him off as he charged in from right and had it bounce off his glove and fall to the grass at his feet. E:9 on Werth. Infante's on first. Storen walks Hanley Ramirez intentionally to bring Gaby Sanchez up with two on and no one out and Sanchez works the count full before singling through short on the eighth pitch of the at bat. Infante stops at third rather than test Hairston's arm. Bases loaded. Nats' Skipper Jim Riggleman calls Sean Burnett in from the pen to face Logan Morrison. LoMo swings at the first pitch and pops up. Werth charges in to make the catch. John Buck, 2-2 fastball. Strike three swinging!! The Nats' left-hander blows the Fish catcher away. Two down in the tenth. Bases loaded. 2-2 game. Infante at third. Donnie Murphy reaches down for a fastball and lines to left...Jerry Hairston dives...in vain, ballgame. Marlins win, 3-2 final.

• How It Started: Entering today's game, the Nats' $126 million dollar man Jayson Werth was 2 for 19 with a double and 13 K's against the Marlins' $3.7M dollar right-hander Anibal Sanchez...

5. The New New Leadoff Man: (And we're not talking about Jerry Hairston, who led off tonight against the Marlins.)

The big news before today's game with the Florida Marlins was that the Nationals would move switch-hitting infielder Danny Espinosa into the leadoff spot tomorrow, replacing Ian Desmond, who's started the season 0 for 13, at the top of the Nats' order though Nats' Skipper Jim Riggleman did say that the two would be interchangeable until someone claimed the top spot as their own.

Will it be too much pressure on the 23-year-old rookie? Will Espinosa be a .337 OBP player like he was in 542 plate appearances at Double and Triple-A in the Nats' system last season? Washington Post writer Adam Kilgore, in an article last September entitled, "Danny Espinosa takes the leadoff spot as Nationals put brawl in the past", reported that Espinosa "hit either leadoff or second for most of this season at Class AA Harrisburg and Class AAA Syracuse," before his September call-up and a late-season MLB debut.

The WaPost writer quoted Riggleman saying then that the team was giving Espinosa something of an audition as a leadoff man while then-leadoff man Nyjer Morgan was suspended for a string of incidents which culminated in a brawl with the same Marlins the Nationals faced tonight. In the article late last year, Riggleman said he didn't think it was role Espinosa would be, "...overwhelmed with, because he has done it." In making the announcement today, Riggleman told reporters including MASNSports.com's Ben Goessling, as quoted in an article entitled, "Danny Espinosa will bat leadoff for Nationals on Wednesday", that for the time being, "'Whichever one is getting on base a little bit more than the other, is the way we'll go about it." Is the move too reactionary after just one series? Desmond did face some pretty strong pitching last weekend, but the Nats made clear from the start that he wasn't an ideal leadoff man...Is Espinosa?

4. MORSE CRUSH: Leadoff man for a day Jerry Hairston grounded out to third to start the game. A 95 mph 0-2 fastball from Anibal Sanchez got Jayson Werth swinging for the 14th time in 20 at bats. Sanchez issued a two-out walk to Ryan Zimmerman, however, and the Nats' Face of the Franchise went first-to-third (like Mike Rizzo designed things) on a line drive to center by Adam LaRoche and scored on a two-out liner to left by Michael Morse that put Washington up 1-0 early in Florida.

3. DE-FENSE: Jayson Werth almost nailed Chris Coghlan at second on a leadoff double to right in the Marlins' first. The Nats' right fielder got behind it and came up throwing but Coghaln beat it to the bag with a headfirst slide. Former Braves' utility man extraordinaire Omar Infante got a sac bunt down that Zimmerman was all over with a trademark low arm angle throw to first. Jason Marquis got help from home plate umpire Bill Welke on a 2-2 change a little inside that Ramirez didn't like. Called strike. But Marquis gave up a towering fly to left by Gaby Sanchez, and Michael Morse settled in under it, and waited at the wall for it to fall into his glove and end the first...

2. 2 for 21, 15 K's. Wilson Ramos and Alex Cora singled in succession to start the Nats' second, and two outs later Jayson Werth K'd swinging chasing a low 2-2 change from Anibal Sanchez for the final out of the Nats' second. 0 for 2, 2 K's. Two runners stranded in scoring position...

1. Oppo-LoMo: Marlins left fielder Logan Morrison went all the way the other way with a 90 mph full-count sinker on the seventh pitch of his second inning at bat against Jason Marquis and Michael Morse tracked it to the wall, looking up and watching as it left. 1-1 game.

[Later] In the 4th, with the Marlins down 2-1, [see 0 below] Morrison doubles in his second AB, lining to right and sliding in safely ahead of Werth's throw in from the wall.

0. THE KIDS CALL HIM ZIM!! THE KIDS CALL HIM ZIM!!!: Ryan Zimmerman's first HR of 2011 is a laser to left that [clanks] off some part of the scoreboard/metal work in left (the camera couldn't keep up, but you heard it) on an 0-1 fastball from Anibal Sanchez one pitch after the Marlins' right-hander got a ahead with a called first strike on a brutal curve. Ryan Zimmerman's HR gives the '05 1st Round pick 117 career dingers, 14 of them against the Marlins, 7 of them in Sun Life/Dolphin Stadium, and 63 of them on the road. The Marlins walk Zimmerman three times in four trips to the plate tonight.

-1. E: 2 Ryan Zimmerman commits his first error of 2011, the Nats' 2nd, on a soft grounder to third off Omar Infante's bat. Zimmerman gets down low and tries to scoop it up into his glove, but comes up empty, dives forward to pick it up and throws to first as he falls, getting it to Adam LaRoche just a step behind the speedy Fish infielder.

-3. 10 to 3 After 5: Jason Marquis gives up a bunt base hit to Emilio Bonifacio who arrives at first a step ahead of a glove scoop and shovel pass high to first by the pitcher. Adam LaRoche reaches up with his foot still on the bag but Bonifacio beats it out. Anibal Sanchez bunts Bonifacio over to second, but he's stranded two outs later when Marquis pops Chris Coghlan to center and gets a groundout third by Infante for his 5th scoreless.

After Jason Marquis' two-out single knocked Anibal Sanchez out of the game in the top of the frame, the Nats' right-hander gave up a one-out double to Gaby Sanchez in the bottom sixth before him at second two outs later. Logan Morrison K's looking and a fly ball to center from John Buck ends Marquis' sixth frame with a 2-1 lead in tact in spite of the fact that he's surrendered three doubles and the solo blast by Logan Morrison.

- 4. PITCH TO ZIM!!: The Marlins walk Ryan Zimmerman for the third time tonight with one down in the Nats' seventh and then Fish Skipper Edwin Rodriguez turns to left-handed reliever Mike Dunn to face Adam LaRoche. The second-straight walk is probably not what the Marlins' manager had in mind, but Dunn recovers with a 1-2 slider to Morse that dives under the Nats' left fielder's bat for Morse's third K of the night. Two on, two out for Rick Ankiel and Dunn walks him too to bring up Wilson Ramos. Ramos battles but grounds out to third on a 96 mph 1-2 fastball and it's 2-1 Nats after six and a half. Ramos' groundout leaves Washington 1 for 8 with RISP and 11 LOB after Nats' seventh.

-5. Jason Marquis is done after 6.1 IP: The fourth double of the night for the Marlins is a leadoff blast off the foul pole in left by Donnie Murphy that puts the tying run in scoring position at second in the Marlins' seventh. Marquis stays on to get the first out on a bunt by Emilio Bonifacio then he's done after 6.1 IP, 6 H, 1 R, 1 ER, 0 BB, 2 K's, 78 pitches, 54 strikes, 11 GO, 5 FO, 4 2B, 1 HR allowed...and one runner still on. Tyler Clippard comes on to face Greg Dobbs, whose sac fly to center scores Donnie Murphy from third just ahead of a slightly-wide-but-closer-than-it-should-be throw in from Ankiel after he makes the catch. 2-2 game in spite of Ankiel's effort. Make that 2 R, 2 ER for Marquis.

0. Go Go Stop: Jerry Hairston, Jr. takes a two-out walk from Marlins' reliever Clay Hensley and he's off and running when Jayson Werth rips a line drive to left and off the wall in the top of the Nats' eighth. Hairston arrives at third with third base coach Bo Porter waving him around. Logan Morrison quickly corrals it and throws in to third, [Stop! - Bo Porter!] Donnie Murphy cuts it and tosses to Omar Infante who tags Hairston as he tries to get back to third. Upon further review, Nats' 3B Coach Bo Porter is seen clearly waving Hairston around til he gets by the bag when he all-of-a-sudden throws up a STOP sign. Way too late. Hairston's hung up and out and the Nats fail to take the lead back.

+1. Clip'd: Tyler Clippard's called back out for the eighth after giving up the sac fly that scored the second run off Marquis in the seventh and Clippard issues a leadoff walk to Omar Infante to start the Marlins half of the eighth. Hanley Ramirez rips one right at LaRoche at first, and the Nats' first baseman knocks it down, recovers and tags the base with the ball after he picks it up. Infante takes second. The Marlins are 0 for 8 with RISP before Gaby Sanchez steps in against Clippard and goes down swinging. Two down. The Nats give Logan Morrison a free pass. John Buck grounds out to short, 2-2 game after eight. Marlins 0 for 9 with RISP.

+2. E: 9 After working a scoreless ninth to send the game to extra innings, Drew Storen comes back out for the ninth and pops Omar Infante up to short right. Danny Espinosa makes his way back tracking it and Jayson Werth calls him off and then drops it. E:9 on Werth. Infante's on first. Storen gives Hanley Ramirez the intentionals to bring Gaby Sanchez up with two on and no one out. Sanchez works the count full and singles through short, Infante stops at third rather than test Hairston's arm. Bases loaded. Nats' Skipper Jim Riggleman calls Sean Burnett in from the pen to face Logan Morrison who swings at the first pitch and pops up. Werth charges in to make the catch. One. John Buck, 2-2 fastball. Strike three swinging!! Two down. Donnie Murphy reaches down for a fastball and lines to left...ballgame. Marlins win, 3-2 final. 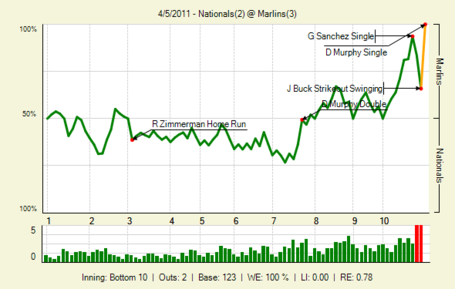