5. Riggleman Changes Mind: Anyone expecting the beginning of the Danny Espinosa era atop the Washington Nationals' order this evening was in for a surprise when they saw tonight's starting lineup. Ian Desmond, who's hitless thus far in 2011 (only 13 AB's) will remain in the leadoff spot for now, with the Nats' Skipper telling reporters this afternoon including MASNSports.com's Ben Goessling, as recorded in an article entitled, "Jim Riggleman on the Nationals' leadoff options", that though they might change things in the future, for now it will be the Nats' 25-year-old shortstop hitting first:

"'It's something we may tinker with as we go along. I'm sure we will,' Riggleman said. 'But right now, we're just going to leave Desi where he is.'"

Riggleman said he'd simply changed his mind, and then went on to say that the Nats have a few players suited for the two-spot in the lineup, but no prototypical leadoff hitter on the roster, which was the reason Desmond was put in the leadoff spot to begin with once Nyjer Morgan was traded. Even with Nyjer Morgan on the team, Riggleman said much the same at the end of last season when asked about the struggles the team was experiencing trying to find someone who could get on base in front of the Nats' middle of the order bats...

"...Riggleman said that for the rest of the year the team would, '...play around with the top of the lineup between [Ian] Desmond, [Roger] Bernadina, Morgan and Espinosa, those four guys somewhere in that one or two spot mixing it up." Asked specifically today about what he'd seen from Espinosa, Riggleman said, "I think he can hit a lot of places in the lineup, [but] basically the on base percentage (OBP) is so key for that leadoff spot, so we're searching,":

Jim Riggleman: "I really like Nyjer Morgan in the no.2 spot. I like him there for various reasons, but we've got about three or four guys who seem to be well-suited for the no.2 spot, that's why we need [Ryan Zimmerman] in there at no.3, [Adam] Dunn in there at no.4, [Josh] Willingham, whoever, [Michael] Morse in no.5, one of those guys in there, those big guys in there. No.1 and no.2? They will determine who they are, they'll make me make the decision, whether it's Morgan, Espinosa, Bernadina, whoever, somebody's gotta hit up there and quite often the one who doesn't will hit no.2. It's almost interchangeable really, which of those two spots, but I think Nyjer can be a real plus for us in that no.2 spot, but that means Desmond doesn't hit two, Bernadina doesn't hit two, Espinosa doesn't hit two, so it's gonna have to work itself out here at the end of the year and in Spring Training next year when hopefully one of them will show that they're going to get on base at about a .350 clip and solidify that no.1 spot."

4. 1 for 14: Ian Desmond needs just one pitch to relieve any anxiety he may have felt about his 0 for 13 start to the season. The Nats' 25-year-old shortstop rips a sharp grounder through the middle of the infield to center and takes second on Chris Coghlan by hustling out of the box and beating the throw in with a headfirst slide. One out later after Jayson Werth flies out to center, Desmond breaks for third on a grounder from Ryan Zimmerman to Hanley Ramirez at short and gets caught in a rundown. Desi's aggression gets him an extra base and costs the Nats an out. Adam LaRoche walks, but Fish starter Chris Volstad gets out of the first when Michael Morse grounds into a force at third.

3. BB-BB-BB: Back-to-back-to-back walks are the result of Livan Hernandez and home plate Umpire Tim Tschida disagreeing over the strike zone. The Nationals' starter thinks he's throwing strikes Tschida won't call and he walks the bases loaded with two outs in the Marlins' first as the two sort out their issues. The result is a 24-pitch inning in which Hernandez throws twenty-four pitches, 18 balls, six strikes and gets a fly ball to center with a 61 mph 2-2 curve to John Buck that ends the first.

2. Smart Ball: Rick Ankiel walks to start the second when Volstad can't find the ump's zone either, and the Nats' center fielder goes first-to-third when Danny Espinosa drives a full-count fastball through second into right. Pudge Rodriguez hits into what should be GIDP no. 333 but Marlins' third baseman Donnie Murphy throws home trying to cut down a hustling Ankiel who slides in headfirst and touches the plate before he's tagged. 1-0 Nats. Livan Hernandez bunts everyone over and it's second and third for Ian Desmond, who drops a bunt toward third and beats the throw to first as Espinosa scores on the [safety?] squeeze. 2-0 Nats. Jayson Werth walks to load the bases. Zimmerman's sac fly to center scores Pudge, but just barely as Desmond almost gets thrown out at third on a great throw in by former Nat Emilio Bonifacio. (see photo above) 3-0 Nats.

1. Mr. National's Night: Livan Hernandez gets Donnie Murphy to miss a curve and he fouls strike three into Pudge's mitt on a 64 mph 1-2 bender. Emilio Bonifacio lines to right for a single, and takes second on a sac bunt by Volstad. A weak grounder to first ends the Marlins' third though and Livan's through two scoreless on 35 pitches after a 24-pitch first. 12 more pitches get Hernandez through three on 47 pitches. Infante flies, Ramirez pops and Sanchez lines out to center, second and right respectively in a quick scoreless frame.

14 pitches get Livan Hernandez through the fourth in spite of what's initially called an error on Ian Desmond. 4-0 Nats after four. Two hits, three walks, one K for Livan on 61 pitches. Hernandez gets a weak grounder to second with a full-count change to pinch hitter Scott Cousins in the fifth, then surrrenders a double to Chris Coghlan. The hit is the first since Emilio Bonifacio's one-out single in the second since they still haven't taken away Desmond's E (ed. note - It's finally taken away with two outs in the 5th.)

Coghlan takes third in spite of a strong throw in by Rick Ankiel on Omar Infante's flyout to center and scores when Hanley Ramirez waits on a 2-0 curve and pulls it by third to make it 4-1 with an RBI double. A two-out walk to Gaby Sanchez sets Logan Morrison up with two on and two out, and a second walk loads the bases. John Buck works the count full, fouls off a curve, fouls a fastball inside, and flies to deeeeep center on a fastball. Off the wall, and in play. Three runs score. 4-4 tie. Livan's likely done and at 97 pitches, 49 strikes after 5.0 IP, 6 H, 4 R, 4 ER, 5 BB, 1 K.

0. Desi Breaks Slump: Ian Desmond's 3 for 3 after he lines a hanging 2-0 sinker outside to left and off the wall to score Pudge Rodriguez from second after the Nats' catcher had reached first on a throwing error by Hanley Ramirez and moved up on a sac bunt by Livan Hernandez. Desmond's first double of the season makes it 4-0 Nats. Desmond grounds out in his fourth at bat, but he walks in the ninth and ends the night 4 for 5 with two doubles, two singles and two RBI's...

-1. E: 4? - Ian Desmond tries to stop a hard-hit-one-hopper that's aimed at his left shoulder but it gets by the shortstop and into left and Desi's given an error initially though it's likely to change later. Livan Hernandez is unfazed and strands the runner. The error is later changed to a hit. The Nats' 2011 E total remains at 3 for now...

-2. Gaudin: Chad Gaudin, who's given up five hits, one HR, one walk and three ER in two games and 0.2 IP in a curly-W cap gives up a one-out single through second to Greg Dobbs and a double to Chris Coghlan, who lines to left and the Marlins have two runners in scoring position for All-Star Omar Infante. Single through short, 5-4 Marlins. Hanley Ramirez up with runners on the corners. Sharp grounder to short, and it rolls up Desmond's arm. This E is going to stick. A run scores to make it 6-4 Marlins. Pudge Rodriguez throws Infante out going for third and Gaudin gets Gaby Sanchez swinging to end the inning. 1.0 IP, 3 H, 2 R, 2 ER, 2 K's.

-3. Om Nom Nom: Rick Ankiel gets a gift when Logan Morrison and Hanley Ramirez converge on a one-out pop to short right. Ramirez pulls up and Morrison falls into the ball and has it bounce off his wrist as he rolls into the grass. Danny Espinosa's up next, but his double play grounder ends any hope of a rally in the eighth. The Marlins add an insurance run in the bottom of the frame when Todd Coffey gives up Chris Coghlan's third double of the night, two walks and a sac fly that makes it 7-4 before the inning is over...

-4. Fish Fry: Ian Desmond's two-out single to left-center gives the Nationals one last ray of hope, and Jayson Werth's two-out walk gives Ryan Zimmerman a shot. Zimmerman fouls off a 2-2 slider and K's swinging at a 2-2 fastball. 7-4 Marlins win. The Florida Marlins are now 41-14 in their last 55 games against the Nationals stretching back to 2007 when the Nats were 10-8 against the Fish. Washington's lost seven straight going back to the end of 2010, and the Marlins have taken eleven of the last twelve against their NL East's rival.

• Doghouse's Post Game WPA Graph: "Back to tearing my hair out": 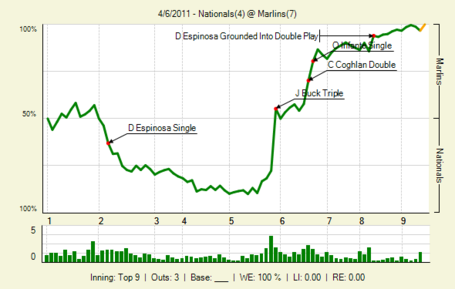