5. Bryce Harper's Class A Debut: 18-year-old 2010 No.1 overall pick Bryce Harper's first professional AB took place at 7:06 pm EDT in State Mutual Stadium in Rome, Georgia against 19-year-old Dominican-born left-handed Atlanta Braves' pitching prospect Carlos Perez. The three-hitter in the Hagerstown Suns' lineup, Harper came to the plate with a runner on second after Rome's starter walked leadoff batter Randolph Oduber and gave up a stolen base. Harper worked the count full after getting down 1-2, fouled off one full-count pitch and then lined to center for an RBI single and a 1-0 Suns' lead. Harper then collects his first stolen base, (MLB.com's Jonathan Mayo says work on the headfirst slide), but is stranded at second when the first inning of the year ends.

Runner on first when Harper comes up for the second time, and he shows off his plus awareness by bunting for a hit when the Rome third baseman is playing him deep with a man on. Harper drops a bunt in a "beautiful spot" and goes "blazing up the baseline" according to the Braves' announcer who'd called Harper a "babyfaced basher" in his first AB. Harper collects his first backwards K in the sixth and grounds out to second in the eighth to finish his Hagerstown Suns' debut 2 for 4 with an RBI single and a stolen base.

4. Cool Hand?: John Lannan issues a leadoff walk to Chris Coghlan in the first and the gives up a single to right by Omar Infante and a run-scoring double by Hanley Ramirez to put the Nats down 1-0 quickly in the finale of the three-game series with the Florida Marlins in Sun Life Stadiu_. Gaby Sanchez battled and scored a run with a groundout, but Lannan held the Fish there and escaped further damage. 20-pitch first. 2-0 FISH. Lannan walks Wes Helms to start the second. One-out later Josh Johnson tries to bunt Helms over to second. Wilson Ramos jumps on it and throws for the lead runner at second, but pulls Ian Desmond off the bag...according to the ump...Lannan gets back to back groundouts, however and gets out of the second.

3. #AOOOOOOO: Marlins' right-hander Josh Johnson retires the first ten batters he faces in tonight's game. A one-out opposite field HR by Jayson Werth breaks up the no-hit bid, however, when it bounces off the railing just behind the yellow padding atop the wall in right field. Werth's oppo-boppo HR to right cuts the Marlins' lead in half. 2-1 Marlins on Jayson Werth's 1st HR as a Washington Nationals.

The Nats' second baserunner of the game is Wilson Ramos who reaches on a throwing error by Hanley Ramirez in the top of the fifth. Rick Ankiel shoots a grounder back up the middle in the next AB and Ramirez can't come up with this one either. Ruled a hit. Ramos takes third and then scores on a groundout by Danny Espinosa that ties it at 2-2 in the fifth...

2. Off the Arm's Glove: John Buck singles off John Lannan to start the Marlins' sixth and he takes third when Wes Helms flies to deeeeeep center and...off Rick Ankiel's glove. It's scored a double, and John Lannan's lifted with runners on second and third. Tyler Clippard vs Emilio Bonifacio with two on, one out. RBI groundout to tie it, but Clippard strikes the next two batters out and it's tied at 3-3 after six.

1.5 Why?: Danny Espinosa hits a leadoff line drive single to center in the top of the tenth off the Marlins' Clay Hensley, and he takes second o a sac bunt by Jerry Hairston, but for some reason the Nats' 23-year-old infielder tries to steal third and gets thrown out by Marlins' backstop John Buck. One out, man on second and a legendary pinch hitter and HR threat's then walked to bring up Ian Desmond, who flies out to right to end the inning. Drew Storen pitched 2.0 scoreless, Todd Coffey throws a scoreless frame, and the Nationals are due up in the 11th...

1. Night of 1sts: Bryce Harper gets his first pro hit. Jayson Werth hits his first HR as a National and Adam LaRoche gets into the act and breaks an 0 for 10 streak with a two-run HR to right and GONE!! A go-ahead two-run blast for LaRoche's first HR as a Nat!! 5-3 Nats' lead. An 0-1 slider from Edward Mujica is up and out over the plate and LaRoche pulls it to right and out. No doubter, Zimmerman scores after a one-out single and the Nationals take a 5-3 lead. Nats' lefty Sean Burnett tilts his cap to the side and saves the game. The Nats avoid the sweep and improve to 2-4 with the win. 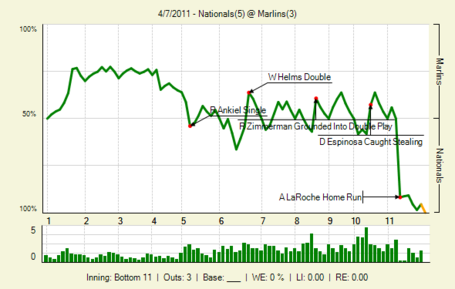