5. "I Always Thought the Knuckleball was the Easiest Pitch to Catch. Wait'll it Stops Rolling, Then Go to the Backstop and Pick it Up." - Bob Uecker: One-time Tigers, Red Sox and White Sox' starter Eddie Ciccotte is generally credited with bringing it to the majors. Toad Ramsey, who pitched from 1885-1890 for the American Association's Louisville Colonels and St. Louis Browns is cited elsewhere as being the inventor of "the floater" or what is now more commonly called the knuckleball. Ciccotte, whose association with the 1919 Black Sox scandal clouds the history of what the 14-year-veteran accomplished as a pitcher, popularized the knuckler over the course of a 14-year career in which he was able to win one World Series before his involvement in throwing one which resulted in his being permanently banned from the game of baseball.

91 years after Ciccotte's career ended, R.A. Dickey's had a late-career resurgence throwing a knuckler a little bit harder than most, but this winter he worked on a slowed-down version that he drops on Nats' right-hander Ryan Zimmerman for a swinging K in the top of the first. Dickey, 36, who says he's 25 in knuckleball years according to Mets/SNY announcers, confuses Zimmerman with a a 62 mph knuckler…that pitch is Livanesque and unfair. Zimmerman shows his amusement after he K's.

4. Dead-Eyez: Jordan Zimmermann tripped on the mound as he went through his delivery in the first, and bounced the ball in to Pudge Rodriguez instead of holding on to it like Brian Broderick did last week in D.C. Jose Reyes, who'd reached on an infield single in today's season opener in Citi Field, took second on what ends up a wild pitch from Zimmermann instead of a balk, but he's stranded at second three outs later when Zimmermann gets a backwards K from Angel Pagan and line drives to center and right from David Wright and Carlos Beltran, respectively.

Jordan Zimmermann then comes through at the plate when he puts the Nationals up 2-0 with a bases-loaded two-run line drive to right after R.A. Dickey gives up a two-out single to Rick Ankiel and back-to-back two-out walks to Danny Espinosa and Pudge Rodriguez. Back on the mound, Nats' right-hander strikes out the side in the second. A 93 mph 2-2 fastball to Ike Davis gets the Mets first baseman staring. Wille Harris fouls off a 95 mph fastball then swings over a brutal 85 mph slider inside. Strike three. Brad Emaus takes a 2-2 slider outside, but Zimmermann doesn't miss the corner with the full-count bender which is called strike three. Zimmermann sets the Mets down 1-2-3 in the second.

3. Ankiel = Teh Hussel: Rick Ankiel hits singles in each of his first two at bats, each of them to the right side of the infield, the first through cleanly, the second off Ike Davis' glove and into right. The Nats' center fielder scores in the Nats' second on Jordan Zimmermann's RBI hit, but after taking second on a wild pitch in the fourth after his second single, and taking third on a throwing error by Mets' catcher Josh Thole, Ankiel's thrown out at home when Pudge Rodriguez grounds out to second with Ankiel running on contact from third. Man on third and with no outs and no run is scored. Still 2-0 Nats after three and a half...

2. Desmond's Hesitation: A half-inning later, David Wright drove a 2-2 fastball to center out of the reach of both Ankiel and Jayson Werth for a leadoff double in the Mets' fourth. A groundout to short by Carlos Beltran in the next at bat presented Ian Desmond with a choice: (1) Throw to third for the lead runner, Wright, who'd made a bad decision to run, (2) or take your time and throw to first even though Wright's dead to, um rights? Desi takes the second option and throws high to first. Adam LaRoche makes the catch, but a sac fly by Ike Davis brings Wright home in the next AB. 2-1 Nats after four.

1. RISP DP: Mets' second baseman Brad Emaus makes a tremendous effort, sprinting toward the grass behind second and sliding on one knee to catch up with and field a grounder up the middle by Jayson Werth. That the throw is even close is amazing, but Jayson Werth's headfirst slide to beat it out is more impressive if ill-advised. Werth moves to second on the second-straight single up the middle, this one by Zimmerman and the bases are loaded when LaRoche singles to right. Michael Morse works a bases-loaded walk and it's 3-1 Nats. R.A. Dickey's bases-loaded walk, the 5th walk of the night, a career-high for Dickey, forces in a run. 3-1 Nats. Only Jose Reyes holds it there, making a double play on his own on a Rick Ankiel grounder up the middle that ends the Nats' bases-loaded threat. Play of the game if Mets come back...

0. DP no. 333: Danny Espinosa works a walk out of Mets' reliever D.J. Carrasco who replaces R.A. Dickey in the top of the sixth. Ivan "Pudge" Rodriguez, who'll likely catch Cal Ripken, Jr. (350) on top of the career-GIDP list long before he reaches 3,000 hits, sends a one-hopper to second for Emaus, who throws to Reyes and on to Ike Davis at first, double play. The 333rd double play of Pudge Rodriguez's career puts him within 17 double plays of the lead.

A passed ball on a 2-2 pitch from Doug Slaten with Carlos Beltran on second after the Mets' outfielder ends Jordan Zimmermann's night with a one-out double, continues Rodriguez's tough day, during which he's been hit in the head twice by fouls, but the veteran backstop calls for a full-count slider outside and the Nats' lefty bends it across the zone for a called strike three on Ike Davis. Chad Gaudin comes on and gets a called strike three from Scott Hairston, Beltran's stranded, and it's 3-2 Nats after six.

-1. [Riggleman Points To Clippard]!: Rather than remove him on a high note, Nats' Skipper Jim Riggleman brings Chad Gaudin back out for the bottom of the eighth, and only removes him for Tyler Clippard after Gaudin walks two and gives up a sac bunt by Chin-Lung Hu that puts the go-ahead run at second. "If you need a strikeout, he’s the guy," Nationals' manager Jim Riggleman told Washington Times' writer Amanda Comak talking about Clippard last night in an article entitled, "LaRoche homer helps Nationals top Marlins in 11", and Clippard comes through striking out Jose Reyes with a two-strike change and then getting a weak grounder from Angel Pagan to end the seventh.

-2. Pudge's 1st HIT!!!: Pudge Rodriguez's first hit of 2011 comes with the bases loaded and Bobby Parnell on the mound in the eighth after a one-out walk to Michael Morse, the third single of the night by Rick Ankiel and Danny Espinosa's third walk of the evening. The 39-year-old, 20-year veteran had reportedly been working on shortening up his swing and going the other way since the preponderance of his groundouts have gone to short this season, and the work pays off when he pushes a two-run single through second into right to make it 5-2 Nationals. Ian Desmond hits a bases-loaded RBI groundout to score Espinosa and it's 6-2 Nationals after seven and a half. Drew Storen throws a scoreless eight. Todd Coffey does the same in the ninth, and the Nats hold on for a 6-2 win!!! 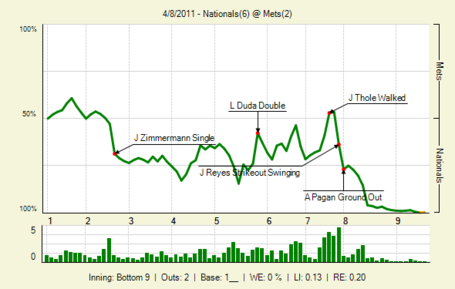