5. Hudson Owns Nats?: 35-year-old Braves' right-hander Tim Hudson held Nationals' hitters to one run on three hits in 7.0 IP of an 11-2 Atlanta win over Washington in the third game of three played in D.C. to start the 2011 season. In his career, Hudson's (11-2) in 19 starts against the Nats. The one-time A's prospect, traded to Atlanta in 2004, has a 1.88 ERA, and a .230 BAA vs Nationals' hitters over the course of his 13-year-career before tonight's game. It does not bode well for the Nationals. The Braves' defense betrays Hudson, however, as he surrenders three of the runs the Nats' score on a 3-run HR and four more that are unearned as the result of three errors by Atlanta defenders...

4. New Leadoff Shark: Freddie Freeman can't decide if he should toss a grounder from Roger Bernadina to the covering pitcher Tim Hudson, who's sprinting over toward first but a step behind the Nats' leadoff man, or if he should take it to first himself? Freeman drops it while moving the ball back towards his glove. Bernadina's safe at first. Braves' catcher Brian McCann has the ball fly out of his hand as he pries it from his mitt after a Tim Hudson fastball. Bernadina steals second without a throw. A grounder by Ian Desmond back up the middle moves Bernadina to third, and Diory Hernandez bobbles it, Desmond reaches first safely with an infield single. A double play grounder from Jayson Werth brings the Nats' first run in, but it's unearned and there's no RBI to be had for the right fielder. 1-0 Nats early...

3. Laynce Nix Will Not Let You Walk Him!!: Laynce Nix hasn't walked in 59 plate appearances this year, he's not about to now. TIm Hudson gets down 2-0 to Nix and then tries to go down and in with a sinking 2-2 fastball to the Nats' outfielder, but he leaves it up enough for the Nix to reach down and launch it to right for a three-run HR. Nix's two-out home run to right comes after two more errors by the Braves. Freeman's second comes on a high chopper to first by Adam LaRoche that the Braves' first baseman misplays. Wilson Ramos lines to right center in the next at bat, and Nate McLouth flinches when he sees Jason Heyward approaching and drops the ball. LaRoche to third and then Nix puts the Nats up 4-0...Martin Prado crushes a slider that Marquis leaves up. Out to left over Laynce Nix's head and the wall for a solo shot to start the Braves' fourth. First hit off Marquis. Marquis issues back-to-back two-out walks to Chipper Jones and Brian McCann then retires Dann Uggla and Freddie Freeman to end the frame. 4-1 Nats.

2. AOOOOOOO!!!!!: The Atlanta Braves announce team can't help marvelling at the low RBI total Jason Werth's amassed through thirty-two games before tonight's affair. Werth's 3-run HR to left off Tim Hudson in the fifth is his fifth of the year, and it drives in RBI's 10, 11 and 12 on the year for the Nats' right fielder. Washington up 7-1 on Hudson after the top of the fifth. Back-to-back one-out singles for the Braves in the bottom of the frame, but Marquis gets a double play grounder out of Martin Prado and gets out of the frame with the 7-1 lead in tact. McCann singles with two down in the sixth, but that's it for Atlanta against Marquis through six.

1. [CHOMP!]: Freddie Freeman lines to left-center for a single in the Braves' seventh, but he's thinking double. Roger "The Shark" Bernadina cuts it off in the gap, spins and throws to second, on target for Danny Espinosa to make the tag. "You're out" yells the ump as he punches the air. Two more groundouts end Marquis' seventh frame on the hill, but the Braves finally get to the Nats' right-hander in the eighth when a one-out single by Prado and a run-scoring double by Eric Hinske combine to end Marquis' night and make it 7-2 D.C. Sean Burnett gives up an RBI single to center by Chipper Jones, 7-3, and a one-out walk to Brian McCann. Two on and one out. Pitching change. Tyler Clippard coming on. The Braves' announcers note that Dan Uggla is 5 for 39 (.128/.171/.179) vs LHP in 2011, but the Nats replace the lefty with the right-hander since Burnett doesn't look sharp, and, of course, Uggla hits a 3-run HR off Clippard. 7-6 Nats.

0. 8 for 8: The Washington Nationals call on the new Flat-Brimmed Closer Drew Storen in the top of the ninth. No. 22 takes the mound against Braves' infielder Diory Hernandez, and gets a fly ball to right for out no.1. Brooks Conrad gets hold of a sinking 1-1 fastball from Storen and drives it to deeeeep center, but Bernadina makes the catch at the wall. Two down. Weak grounder back to the mound from Prado and Storen's 8 for 8 in save opportunities this season and he hasn't allowed a run, earned or otherwise since April 5th. 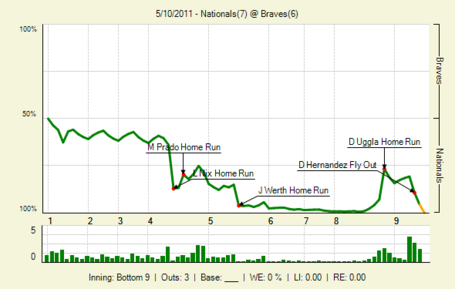