Washington Nationals Rally In 9th, Win 7-3 Over Atlanta Braves In The 11th.

Share All sharing options for: Washington Nationals Rally In 9th, Win 7-3 Over Atlanta Braves In The 11th.

5. Catcher vs Catcher: John Lannan's night begins with a grounder off his wrist. Martin Prado grounds back to the mound and off Lannan. Jerry Hairston can't corral the deflection. Infield single. A nasty 2-2 curve to Alex Gonzalez has the Braves' shortstop glaring out at the mound as he walks to the dugout. Lannan walks Chipper Jones with one down and gives up a two-run double off the right field wall by Brian McCann that puts the Braves up 2-0 on the Nats after one. Braves' right-hander Tommy Hanson leaves a full-count fastball up inside for Wilson Ramos to drive to left-center. Leadoff double in the Nats second, and the Nats' catcher scores on an RBI line drive to right by Laynce Nix. 2-1 Braves after one. Wilson Ramos is now 3 for 3 against Hanson in his short MLB career, but he pops out in his second at bat of the night in the third and his hit streak against Hanson ends after three AB's...(Did someone say, 'Hit Streak?'")

4. BRYCE HARPER STREAK UPDATE: Bryce Harper lines out to center in his first at bat tonight, but the second time up the bases are loaded with no one out in the third, and Nats' top prospect, Washington's 2010 no.1 overall pick, the SI.cover kid...the eye-black-oozing baseball cyborg...hits a Grand Slam to right-center to get the Suns within one in what until then had been a 5-0 game in favor of the visiting Delmarva Shorebirds. The home run is Harper's eighth in 31 games and 108 at bats, and it gives Harper hits in fifteen-straight games. The 18-year-old future Nats' outfielder ends the night 4 for 5 with a HR, 5 RBI's and a .396 AVG on the season.

3. Cool Hand: John Lannan puts the first two runners on in the fourth. Dan Uggla singles and Freddie Freeman walks, but the Nats' lefty retires three-straight to strand both runners in scoring position. A leadoff single to center by Martin Prado starts the fifth, but a swinging K by Alex Gonzalez and a double play grounder from Chipper Jones later it's still a 2-1 game with Atlanta ahead after five. Lannan needs 73 pitches to get through five innings. Tommy Hanson starts the sixth at 85 pitches, and nine pitches later, when Laynce Nix lines to right for a two-out single, Hanson's done for the night, pulled with a 2-1 lead in the sixth. Cory Gearring gets Danny Espinosa swinging and it's 2-1 Braves in the middle of the sixth.

2. This Inning Makes No Sense: The Nationals get a leadoff single off Braves' left-hander Eric O'Flaherty. Jerry Hairston goes back up the middle with a grounder Alex Gonzalez can't reach. Brian Bixler bats for John Lannan, but sac bunts the runner over. Hairston to second. Michael Morse hits for Roger Bernadina. Fly ball to center, two down, and Jerry Hairston's thrown out trying to steal third. The Nats run themselves out of an RBI opportunity, and the pitcher who replaces Lannan, Doug Slaten, gives up a leadoff HR to Eric Hinske in the bottom of the frame to put the Braves up 3-1. Slaten's done...

1. Kimbrel Collapse:  Jonny Venters walks Jayson Werth with one down in the Nats' eighth, but a brutal two-strike slider to Adam LaRoche gets the Nats' first baseman chasing and a weak grounder from Wilson Ramos ends the top of the frame. Todd Coffey [sprints to the mound] throws a scoreless eighth, and the Braves' right-hander Craig Kimbrel comes out to end it in the top of the ninth. Leadoff single by Laynce Nix on an opposite field grounder through short. Danny Espinosa K's swinging through a belt-high 0-2 fastball outside from Kimbrel, but Jerry Hairston's line drive to center puts the tying run on with one down in the ninth. Kimbrel walks Stairs on four pitches, Jason Marquis on to run. Bases loaded. 3-1 Atlanta. Kimbrel gives up the lead on a two-run single by Alex Cora that bounces off the second base bag and into center. Nate McLouth throws in to third, Marquis is safe at third and Cora takes second. Second and third, one down. Desmond K's looking. Werth K's swinging. Two stranded. 3-3 game after nine.

0. Desi and Werth Get It Right This Time: No score in the 10th. Top of the eleventh. Braves' right-hander Scott Linebrink gets the first out, but then loses control. HBP on Pudge Rodriguez. Alex Cora shoots a single through second with Rodriguez running and all-of-a-sudden there are runners on first and third with one down. Ian Desmond up, and he doubles two runs in with a sharp grounder by third and into left. 5-3 Nats. Jayson Werth makes it 7-3 with one swing. Two-run HR for Werth, his 8th and second in two days in ATL. 7-3 Nats after ten and a half. Tyler Clippard gives up a leadoff double to Chipper Jones, then retires McCann, Prado and Freeman in order, groundout, groundout, backwards K. Sit down, Freeman. 7-3 Nats win. The Nationals win their second straight series on the road after being swept out of Citizens Bank in games 1-3 of the 9-game trip... 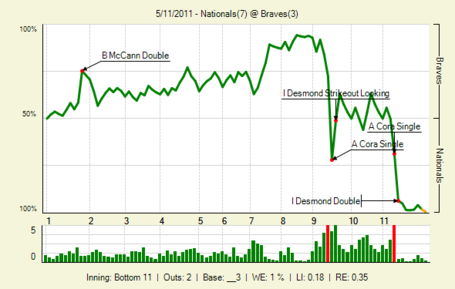