5. Leadoff Shark Stranded: Roger Bernadina's the only batter to reach in the first, bunting for a single and stealing second base before three Nats in a row go down to ATL RHP Derek Lowe. Jordan Zimmermann gives up back-to-back singles to center to start the first, then gets Chipper Jones looking at a low fastball away, Brian McCann staring at a fastball for strike three inside and Eric Hinske frozen as a full-count slider drops in outside for a called strike and the final out of the frame. 3 K's for Zimmermann, but it takes him 29 pitches to get out of the first.

4. Espinosa Straightens One Out?: Derek Lowe pays for a leadoff walk. Adam LaRoche takes a full-count change. Danny Espinosa gets hold of a sinking 1-0 fastball and drives it out to center field in Turner Field for a two-run blast. 2-0 Nats on Espinosa's fourth on the year. Jordan Zimmermann's fastball is all over the zone, rarely ending where Pudge's mitt's set. Zimmermann's hit them when he's needed to though, five K's through 2.2...The Nats' right-hander leaves a two-out 2-0 fastball up for Chipper Jones and it gets CRUSHED! Solo shot to straight left, 2-1 Nats after Chipper's 4th of 2011 and the 440th of his career. 2-1 Nats after three...

3. NIX'D: Laynce Nix is on fire, and he hits an opposite field double off Derek Lowe to start the Nats' fourth. Adam LaRoche follows with a sharp grounder that gets by Dan Uggla and into right allowing Nix to score from second for a 3-1 Nats' lead. Adam LaRoche moves up when Danny Espinosa's hit by a pitch. (ed. note - "STOP HITTING ESPINOSA!!") Pudge Rodriguez hits a potential DP grounder to Chipper Jones at third, Uggla at second, but the throw to first is late and it gets by Freddie Freeman. LaRoche scores. 4-1 on what might have been a DP if not for the E on Uggla. Jordan Zimmermann collects K's no. 7 and 8 in the bottom of the fourth, striking Eric Hinske and Freddie Freeman out after a fly to right by Uggla started the frame...

2. 11 K's: Alex Gonzalez goes down swinging and drills himself into dirt, spinning the batter's box. K no.9 for Jordan Zimmermann in the fifth. Derek Lowe K's swinging too and Zimmermann's hit double digits. The ninth ties and the tenth tops Zimmermann's career best. Zimmermann's through five on 76 pitches after a 29-pitch first. The previous career high of nine K's came against Florida last August in Zimmermann's 6.0-scoreless inning outing against the Marlins.  K no. 11 on the night tonight comes from Dan Uggla, who swings through a 95 mph fastball low and away. Swinging K, the 8th swinging of 11 total. 90 pitches to get Zimmermann through six with a 4-1 lead.

1. FHOFHR!!: Pudge Rodriguez takes Derek Lowe deep to left, all the way the other way and out of the park for a solo HR in the Nats' 6th. Lowe leaves a slider up and the Future Hall of Fame catchers powers it out over Braves' left fielder Martin Prado and into the first row of seats. HR no. 311 of Pudge Rodriguez's career gives the Washington Nationals a 5-1 lead over Atlanta. Jordan Zimmermann comes back out for the seventh, 90 pitches on his arm. 97 pitches after a hard fought AB against Hinske. Zimmermann gives up a one-out walk to Freddie Freeman, and Alex Gonzalez hits a bloop single over Desmond at short. Two on, one out. Zimmermann's done: 6.1 IP, 5 H, 1 R, 1 ER, 2 BB, 11 K's, 103 pitches, 65 strikes, 5 groundouts, 2 flyouts...2 runners on are his...

0. Make That 3 ER For Zim(n): The Nats' crooked-capped lefty Sean Burnett walks the first batter he faces, pinch hitter Brooks Conrad and then gets into a battle with Martin Prado, who works a ten-pitch at bat and then hits a grand slam to left-center! Jordan Zimmermann watches from the dugout as the Braves tie it at 5-5 and an exceptional outing will end in a no-decison for the Nats' 24-year-old right-hander.

0. FREE BASEBALL: The Braves tie it at 5-5 in the seventh. Doug Slaten throws two scoreless in relief and the Nats and the Braves go to extra innings in Atlanta. After Lowe's done, Cory Gearrin, Eric O'Flaherty, Jonny Venters and Craig Kimbrel get the Braves through the tenth. After Kimbrel strikes out the side in the top of the first extra frame, Doug Slaten comes back out for his third inning of work. Leadoff walk to Martin Prado. Sac bunt by Nate McLouth on a two-strike pitch. Slaten gives Chipper Jones the intentionals and gives up the game-winner to Brian McCann. 1-1 fastball, RBI line drive single to right and it's over. 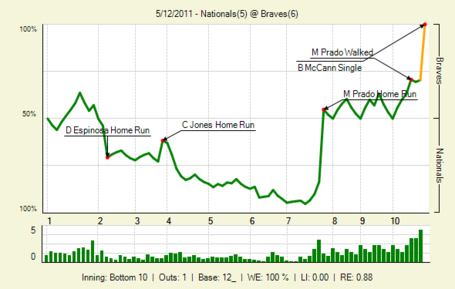