5. Welcome Back!: Wilson Ramos doesn't ask for an appeal on a check swing by Chris Coghlan on a 1-2 two-seamer inside, but Nats' third baseman Jerry Hairston speaks up and the third base ump punches Coghlan out. One down. One out later, Hanley Ramirez [spits]™ lines to center on too nice an 0-2 pitch from Nats' lefty Tom Gorzelanny, who then leaves another one up for Gaby Sanchez, 2-0 Marlins, and John Buck, 3-0 on back-to-back HR's to left-center. Gorzelanny does strike out the side though, 3 K's, 3 ER. The Nats' leadoff man Roger Bernadina bunts his way on in the bottom of the first again tonight as he did in Atlanta on Thursday, but he's erased by a DP grounder and Jayson Werth's thirty-sixth K of the year ends the first. 3-0 Marlins early.

4. Desmond D and O: Gorzelanny bounces an 0-2 fastball to Hanley Ramirez [spits]™ the second time they meet in the third. A cut fastball inside misses, and Hanley Ramirez [spits]™ lines by third for a two-out double on a 2-2 change. The Nationals decide to walk Gaby Sanchez this time and John Buck grounds into a 6-3 DP, Espinosa to LaRoche on a grounder to second that ends the Marlins' third. The Nationals get a leadoff runner on again in the bottom of the third when Jerry Hairston hits a bloop single to center off Volstad. Gorzelanny bunts successfully on a full-count pitch. Roger Bernadina works the count full and unloads on a high fastball, singling to center sends Hairston to third. First and third, and Ian Desmond gets a fastball inside he can handle, driving in a run with a low liner through short. 3-1 FIsh. Werth K's on a check swing strike after swinging at the first two pitches from Volstad, 37 K's, and Adam LaRoche grounds into a force at second. Still 3-1 Florida...

3. HR. No.3: Belt-high heater to Mike Stanton after Gorzelanny gets strike one with a slider, but it's the fastball is up in the zone and quickly out to left on a line drive HR that puts the Marlins back up by three. Stanton's sixth of 2011 is the third of the night off the Nats' left-hander...Laynce Nix gets hold of a first-pitch fastball from Chris Volstad and his solo HR to right gets out in a hurry too, finally landing in the second deck in right above the out-of-town scoreboard and below the big one. Nix's 5th HR makes it 4-2 Marlins in the fourth. 11 for 38 with 2 HR's and 5 RBI's in his last 10 games after the HR. Danny Espinosa walks and goes first-to-third on a double through third and into left by Hairston. Gorzelanny can't get a bunt down and he K's swinging. Roger Bernadina is 3 for 3 on the night after an after a line drive double to left. Desmond scores, Hairston crosses too, two-out, two-run double for the Shark. 4-4 after four innings in Nats Park.

2. SHARK ATTACK!!!: Mike Stanton vs Todd Coffey. 4-4 game in the Marlins' 5th. Coffey's on after Tom Gorzelanny gives up a one-out single to Gaby Sanchez and then hits Logan Morrison to put two on with two out. Gorzelanny's just the second Nats' starter to go less than 5.0 IP in 38 games. Stanton has a solo HR already tonight and it looks like he'll have two RBI's as he rips a screaming fly ball to center field. Roger Bernadina's on it, gets there, leaps and makes a snow-cone catch before crashing hard on the track...WHAT? The Shark makes the catch of the year, robbing Stanton of RBI's and extra bases and preserving the 4-4 tie with a catch you'll be seeing over and over again for a long time!

1. @LoMoMarlins: Todd Coffey throws two and a third (2.1 IP) with two scoreless to keep it tied after he and The Shark combine to end the fifth for Gorzelanny. 4-4 in the eighth and Tyler Clippard takes over on the mound. 2-2 fastball to Logan Morrison and @LoMoMarlins (as he's known on the Twitter) hits a solo HR that just clears the out-of-town scoreboard in right field. Jayson Werth tracks it, follows it to the wall and watches it go out. 5-4 Marlins in the eighth. 4th HR of the night for the Fish.

0. Comeback? Jayson Werth and Adam LaRoche take back-to-back walks to start the Nats' eighth. Wilson Ramos isn't bunting, but mayhap he should have. Double play grounder by the Nats' catcher. Runner on third with two down for Laynce Nix. Nix rips an RBI line drive by first base and Werth scores. 5-5 game after eight. Drew Storen retires the Marlins in order in the top of the ninth and it's heading for extra innings unless Roger Bernadina can get on when he comes up with two down in the bottom of the inning. Bernadina takes on a full-count pitch from Marlins' right-hander Burke Badenhop and walks with two down. Ian Desmond goes the other way with a grounder through second with Bernadina running. Bernadina goes first-to-third easily and with two down Jayson Werth is up. Desmond steals second so the Marlins walk Werth. LaRoche vs Marlins' left-hander Randy Choate. Groundout to second.

-1. Free Baseball!!: Top of the tenth. After a lot of talk last night about the Nats not wanting to use Brian Broderick in pressure situations, the Rule 5 pick from the Cardinals' organization is in for the top of the 11th. Omar Infante singles to center with one down. Broderick vs veteran pinch hitter Greg Dobbs. Line drive to right, and it falls in fair. Infante rounds third as Werth hits the cutoff man. Throw home from Desmond, Ramos catches it. Infante slides in head-first. The ta...Infante avoids the tag, reaches around and touches the plate. "SAFE!! SAFE!" The ump is sure. The replay confirms it. Incredible concentration by Infante. He's out if Ramos just leaves his mitt on home instead of reaching for the tag. 6-5 Marlins. That's how it ends. 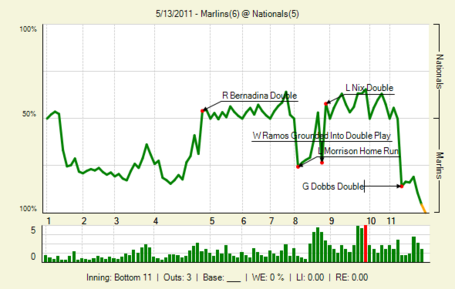