Washington Nationals Shut Out By Anibal Sanchez And The Florida Marlins, 1-0 Fish.

Share All sharing options for: Washington Nationals Shut Out By Anibal Sanchez And The Florida Marlins, 1-0 Fish.

5. Livan vs Anibal Rd. 2: When they met last week in Sun Life Stadium, Livan Hernandez gave up eight hits and six runs over 5.0 innings of an 8-0 Nationals' loss to the Marlins. Florida starter Anibal Sanchez struck out eleven over seven scoreless, allowing just two hits, both in the seventh, but no runs, no walks last time out. Livan Hernandez pitches around Hanley Ramirez with two down in the first this afternoon to get to Gaby Sanchez? Livan drops a 2-0 slider over the top for a called strike. A 68 mph curve gets a swinging strike two, and Wilson Ramos throws Hanley Ramirez out going for second on the next pitch, scoreless top of the first. Anibal Sanchez strikes Jayson Werth out for the 16th time in 23 at bats against the new Nats' RF and the Marlins' starter retires the Nationals in order in his own scoreless first.

4. Luycky Laynce: Even the bloop singles are falling in for Laynce Nix now. The Nats' (seems-to-be-)starting left fielder reaches on a bloop single to center in the Nationals' second. Adam LaRoche's annual early-season struggles continue, however, when he strikes out swinging against Sanchez, and as Wilson Ramos takes a called strike three, Nix successfully steals his second stolen base of the season and second since 2005. Jerry Hairston, Jr. lines out to short, Nix is stranded.

3. Mr. 3,000!!: As MASN notes during today's broadcast the first out of the Marlins' fourth gives Livan Hernandez a clean 3,000 innings pitched in the Major Leagues since he made his MLB debut on September 24, 1996. 177 of those starts have been for the Nationals/Expos over the seven seasons Hernandez has played for the organization. Livan enters today's game 65-63 in a Montreal/Washington uniform. Livan celebrates the milestone by abusing Marlins' shortstop Hanley Ramirez [spits!]™. Hernandez gets strike one with an 84 mph sinking "fastball" then drops down to 58 with a curve that almost hurts. Swinging strike two. Ramirez takes a brutal slider for a ball, then takes an 85 mph "heater" for a called strike three. 3,000.1. According to MASN, Hernandez is just the 108th pitcher to reach the 3,000 IP plateau. Here are the first 100 pitchers on the list.

2. Werth vs Sanchez: Jayson Werth K'd swinging the first time he faced Anibal Sanchez on September 8, 2008 in a game between the Fish and Phillies in Citizens Bank Park. Entering today's game, Werth was 2 for 22 against Sanchez, striking out in 14 of 21 plate appearances since that first AB in '08. The Marlins' right-hander strikes Werth out twice in his first two at bats today, leaving the Nats' RF 2 for 24 with 17 K's. Werth doubles in his third AB against Sanchez in the seventh, sending one out to left center on one hop for a ground-rule two-bagger.

1. Sanchez Pwns Nats: The rest of the Nats haven't fared much better against Sanchez than Werth through three starts this season. After Jerry Hairston's swinging K ends the Nationals' fifth, the Marlins' right-hander has 25 K's in 3 GS and 17.2 IP against D.C. this season, and he has a one-hitter through six with the Nats' only hit Nix's bloop single in the second. 14 up and 14 down through 5.2 IP before another runner reaches. Roger Bernadina takes a two-out walk but he's stranded at first when Danny Espinosa swings at the first pitch he sees after a walk and grounds out to first. 0-0 score through six innings in Nats Park.

0. Mike Stanton Pwns Nats: 2-2 sinker to Mike Stanton, who's 0 for 2 so far today, but a sinkless 2-2 "fast"ball from Livan Hernandez stays up and the Marlins' right fielder deposits it in the Red Loft seats above left-center. Solo HR, 1-0 Marlins. That's two HR's in two games for Stanton in Nats Park this weekend, two off of Livan in eight plate appearances against the veteran right-hander and 6 HR's in 7 games and 33 plate appearances in Nationals Park over the course of his two-year career. Stanton's hit in 15 of 36 plate appearances in Nats Park after the HR, collecting four doubles, the seven HR's and now 11 RBI's.

-1. WERTH WINS THIS TIME!: Jayson Werth's ground-rule double off Anibal Sanchez in the seventh is just the third hit of the day off the Marlins' starter. Laynce Nix K's looking at a sinking 2-2 fastball that's called strike three. Nix doesn't agree. Adam LaRoche grounds weakly to second. Wilson Ramos works a walk, but Jerry Hairston's first-pitch-swinging in the next at bat and he sends a weak roller out to third to strand Werth three outs after his double.

-2. Lightning ROD!: Henry Rodriguez walked three, threw a few to the backstop and needed 27 pitches, just nine of them strikes to get through one inning of work against the Marlins last Sunday, in which the "Lightning Rod" threw a wild pitch that allowed the first runner he'd walked to score easily from third. Today, in his first outing since then, Rodriguez comes on with one down in the eighth, and he needs just eight pitches, six of them strikes to shut the Marlins down. 4 fastballs 96-98 mph and then an 83 mph 2-2 slider in the dirt for a swinging K from All-Star Omar Infante. Fastball at 98 and back-to-back nasty mid-80's sliders from Henry Rodriguez, Hanley Ramirez [spits]™ goes down chasing, 2 K's for the Lightning Rod. (via @NationalsPR: "Rodriguez struck out both batters he faced...he's got 9 strikeouts in 5.2 innings this season.")

-3. Cole Kimball Debuts: Cole Kimball threw 13.2 scoreless for the Nats' Triple-A affiliate, the Syracuse Chiefs, winning one game (1-0) and recording five saves in five opportunities while holding opposing hitters to .163 batting average against in 12 games before he was called up the big leagues last night. Kimball, debuted in the top of the ninth this afternoon, in his sixth season in the Nats' system after they selected the Brooklyn, NY-native out of Centenary College in Hackettstown, NJ in the 12th Round of the 2006 Draft. 1-1 curve for a swinging strike and then a nasty diving splitter inside to get Gaby Sanchez swinging. Kimball's 1st MLB K. He's averaged (9.6 K/9) over the course of his minor league career. Logan Morrison lines sharply to second on a 93 mph 3-1 fastball. Kimball gets up 0-2 on Mike Stanton with two curves, but four pitches later it's his first MLB BB. Greg Dobbs flies to left to end Kimball's first scoreless frame.

-4. WEREWERTH: Jayson Werth finally faces a pitcher other than Anibal Sanchez, who's done after 8.0 scoreless in which he allows just three hits and two walks, but no runs. Werth takes a four-pitch walk from Marlins' closer Leo Nunez. Laynce Nix follows with a single through second and there are two Nats on with no one out. Adam LaRoche grounds into a force at second, but Werth gets to third and LaRoche beats the throw to first. First and third, one down. Wilson Ramos pops up on the first pitch he sees. Two down. Jerry Hairston flies to left. Ballgame. 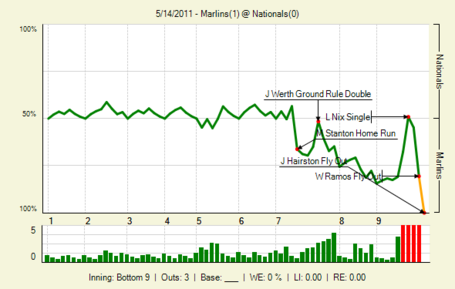