Jason Marquis (5-1) With A .333 AVG After 8-4 Washington Nationals' Win Over The Florida Marlins.

Share All sharing options for: Jason Marquis (5-1) With A .333 AVG After 8-4 Washington Nationals' Win Over The Florida Marlins.

5. Marquis - Loose Bodies + Pudge = W: Since Jason Marquis' complete game shutout of the Giants back on April 29th, the Nats' right-hander has surrendered as many runs (10 R, 9 ER) in two starts as he did in the first four starts of the season (10 R, 10 ER) that preceded his complete game outing against San Francisco. Marquis' one previous start against Florida this season came back on April 5th, when the 32-year-old second-year Nat held the Marlins' batters to two runs on six hits in 6.1 innings pitched of a 3-2 loss to yesterday's Fish arm Anibal Sanchez. Marquis vs Javier Vazquez today, and the Nats' starter throws a seven-pitch, seven-strike 1-2-3 first to start today's series finale with Florida.

4. Twisted FireSharkStarter: Roger Bernadina bunts his way on to start the Nats' first, again. One out later he's running and safe at second when Jayson Werth grounds up the middle and beats a throw from behind the bag by Hanley Ramirez [spits!]™ to first for an infield single. Two on, one out. Laynce Nix reaches for an 0-1 fastball low and away and pops it to left-center where it falls in for an RBI single. 1-0 Nats when Bernadina scores. A misplay and a weak throw in by Logan Morrison in left allow Werth and Nix to move into scoring position. Pudge Rodriguez battles down 1-2 and lines to right on a curve from Vazquez. Two runs score. 3-0 Nats. Jerry Hairston beats out the backend of a DP grounder, force at second, but another run when LaRoche crosses. 4-0 Nationals. A two-out single by Alex Cora brings Marquis up, and the pitcher is 6 for 19 (.316) on the season after he doubles to left to score two. 6-0 Nats after one...

3. Sundays With Pudge: A throwing error by Jerry Hairston, Jr. at third starts the Marlins' second. Gaby Sanchez reaches on the error, takes third on a double by Logan Morrison and scores on a sac fly by Mike Stanton. 6-1 game in the second. Marquis gives up a two-out RBI single to backup catcher Brett Hayes and it's 6-2 Nats before he's out of the second. Hairston's 5th error of the year is the Nats' 24th error of 2011 and it's there first in 10 games. Marquis gets through the first on seven pitches, but needs 18 to get through the second. Top of the third, Marquis issues one-out walk to Emilio Bonifacio, who's caused the Nats all kinds of trouble since they dealt him. The home plate Ump squeezes Marquis on 2-2 slider to Hanley Ramirez, but Marquis comes back with another bender for a swinging K and Pudge Rodriguez throws Bonifacio out going for second. Strike'em out, throw'em out. Pudge loves Sundays! That's 5 of 12 CS on the year for the veteran backstop.

2. Former Expos' Starter: The Nationals make Javier Vazquez throw 25 pitches in what ends up a long 1-2-3 third for the former Marlins' right-hander. Jason Marquis is 2 for 2 today and 7 for 20 on the season after his two-out single in the fourth. Vazquez completes a scoreless frame, but he's done after throwing 90 pitches, 56 of them strikes. Jason Marquis strikes out Vazquez's pinch hitter Osvaldo Martinez with a 1-2 slider, and gets back-to-back flies to left for a 1-2-3 fifth. 70 pitches, 44 strikes through five for the Nats' right-hander. Jayson Werth lines to center to start the Nats' fifth, 2 for 3 with two singles today. Two outs later, the Sunday hero, Pudge Rodriguez doubles to left, just out of a diving Logan Morrison's reach. Werth scores, 7-2 Nats.

1. [Coffey Sprints To Mound, Gets Hit, Leaves]: Jason Marquis gets behind Mike Stanton 2-0 and gives up a scorched double by third that Jerry Hairston miraculously almost snags. Probably better for his hand he didn't. Greg Dobbs follows with a double to right and Marquis is in a little bit of trouble. 7-3 Nationals. Chris Coghlan hits a two-out double to right, 7-4 Nats. [Coffey Sprints To Mound]. Nats' right-hander Todd Coffey sprints in from the bullpen. Emilio Bonifacio lines back to the mound and off Coffey's elbow. Coffey's done. Tyler Clippard vs Hanley Ramirez. [spits!]. Fly ball to center, 7-4 Nats after seven and a half...

0. The Fugitive: Tyler Clippard walks Gaby Sanchez on five pitches to start the eighth. Logan Morrison hits a 1-0 change...right to LaRoche at first. LaRoche tags Sanchez. Double play. Two down. Mike Stanton rips a double to left with two down, and the Marlins' outfielder is hitting .500 (17 for 34) in nine career games in the nation's capital. Greg Dobbs pops out to end the frame. The Nationals add a run in the bottom of the frame. Leadoff and one-out walks to Pudge Rodriguez and Alex Cora, respectively, and another infield single by Roger Bernadina. Pudge scores. 8-4 Nationals after eight. Cole Kimball gives up a leadoff walk, but completes a scoreless frame. 19 pitches, 11 strikes in his second MLB outing. Marquis gets the W, (5-1) on the year. 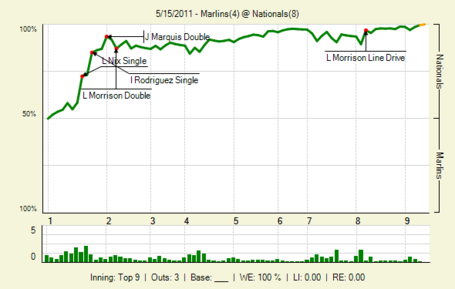