5. Long First: It takes John Lannan 23 pitches, (12 of them strikes) to get through the first after he allows back-to-back singles to Andrew McCutchen and Jose Tabata to start the frame. A double play grounder from Neil Walker to Danny Espinosa, Ian Desmond and Adam LaRoche, and Lannan's almost out of trouble. A walk to Matt Diaz puts runners on the corners with two down and Jerry Hairston makes a spectacular diving play on a sharp grounder to third by Pirates' first baseman, Steve Pearce, but Hairston's throw to first is late so the Pirates' first run scores. 1-0 Pittsburgh after a half...Wilson Ramos, the youngest batter to hit in the cleanup spot this season, according to Washington Post writer Adam Kilgore on Twitter, gets his first opportunity with runners on in the bottom of the first. The Nats' 23-year-old catcher works the count full and lines through short. Desmond was running and he scores easily. 1-1 game. Werth to second, but he's running when Adam LaRoche lines out to short. Double play. Maholm throws 27 pitches, 15 strikes in the first...

4. Shark Arm!: Pirates third baseman Brandon Wood apparently hasn't heard about the exploits of Nats' center fielder Roger Bernadina. Still tied at 1-1 in the fourth when Lannan walks Wood to start the frame, but the former Angels' prospect tries to take a base on Bernadina's when Chris Snyder lines a single to center. THE SHARK throws Wood out at third. One hop to Jerry Hairston who pulls it in and makes the tag. Don't run on the Shark, Wood. Lannan gives up a double to Ronny Cedeno on a line drive to right. First and third. The Pirates' pitcher tries to get a bunt down, Snyder's running from third. Blown squeeze when Maholm misses. Two down. And a swinging K ends the Bucs' fourth. Still 1-1 somehow.

3. COOL HAND: John Lannan gives up a one-out double to Jose Tabata in the Pirates' fifth, and one out later Jayson Werth has to make a sliding catch (he totally caught it) in short right on a flare by Matt Diaz to keep it tied at 1-1 after four and a half in Nats Park. A little luck and some bad Bucs' baserunning helps the Nats' lefty through 5.0 IP in which he's allowed seven hits and three walks, but given up just one run while throwing 84 pitches, 45 of them for strikes. Thanks, Pirates. Two down in the Nats' fifth and Jerry Hairston gives the Nats' a 2-1 lead with a HR to left on a 3-1 two-seam fastball from Maholm. All the way into the visiting team's bullpen. Hairston's second this year makes it 2-1 Nationals. 1-2-3 fifth, Lannan's at 94 pitches. A 10-pitch frame might have earned Lannan another inning.

2. Leadoff Walks Rarely Lead To Trouble, Right?: Lannan's back out for the seventh, but a leadoff walk to the Pirates' eight-hitter, Ronny Cedeno will bring a quick end to Lannan's night. Maholm gets a sac bunt down. Nats' Skipper Jim Riggleman goes to the pen. Cole Kimball comes on to face Andrew McCutchen. It's Kimball's third outing in three days since he was called up to make his MLB debut. The Nats' right-hander starts McCutchen off with two curves. One ball, one strike. Kimball misses with a 94 mph fastball, and McCutchen swings late on another heater and connects for an RBI triple into the right field corner. Lannan's leadoff walk scores. 2-2 game after seven.

1. Left-Side Danny: After going 0 for 2 with two hard hit balls in his first two at bats from the right side against Pittsburgh left-hander Paul Maholm, Danny Espinosa's up as a right-handed hitter against Pirates' right-hander Jose Ascanio after Michael Morse's one-out opposite field single in the Nats' seventh chases the Bucs' starter. One on, one out, and Espinosa gets hold of a first-pitch change and drives it to right, Espinosa takes a moment to admire it as it falls into the Nationals' bullpen. Two-run HR. Espinosa's fifth and the Nationals take a 4-2 lead on the Pirates.

0. STOREN WARNING!!: Cole Kimball gets one in the eighth and Sean Burnett finishes the frame with two quick outs. Drew Storen's on with the Nats up 4-2 after eight innings tonight. 8 for 8 in save situations so far. 20.0 scoreless-inning-streak on the line. Ryan Doumit swings at the first pitch he sees and singles through the right side of the infield on a 95 mph fastball. Storen "misses" with an 0-2 slider outside, then wastes one he can't get Ronny Cedeno to chase. After Cedeno fouls off a mid-90's sinker, Storen drops a 2-2 slider over the top instead. Called strike three, one down. Pinch hitter Garrett Jones connects with a 95 mph 0-1 fastball. One out single to right. Andrew McCutchen lines out to Laynce Nix in left. Two. Jose Tabata lines to Werth in right, 1-2-3 The Nationals win!! 21.0 scoreless for Storen, longest streak in the Majors!! 9 for 9 in save opportunities. 0.38 ERA after the game. And Cole Kimball vultures a W! His first in the majors! 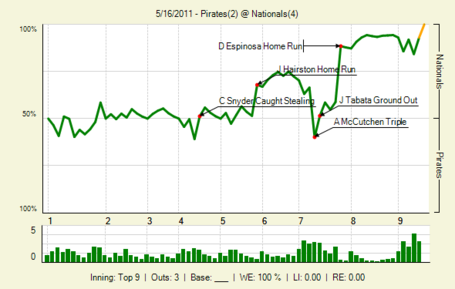