5. Nats vs Left-Handers: The New York metro area has been cloud-covered and rain-soaked all afternoon, but the storms cleared in time for the Nationals and Mets to get the first game of their two-game set at Citi Field in tonight. Lefty vs Lefty with Jon Niese and Tom Gorzelanny on the mound. The Nats enter the game with an NL-worst .194/.284/.302 team slash against LHP. The Mets' left-hander strikes Roger Bernadina and Ian Desmond out, but Jayson Werth singles to center with two down and goes first-to-third™ on a Wilson Ramos' single before Adam LaRoche (.111/.250/.194 vs LHP) flies out to right. Gorzelanny gives up a line drive to third by Jose Reyes that hits Jerry Hairston's glove and bounces off and over the Nats' third baseman. Justin Turner, tonight's third baseman for NY with Mets' FOF David Wright DL'd with a stress fracture in his lower back, doubles, moving Reyes to third. First and third, one down. After Carlos Beltran K's swinging, Jason Bay flies out to short left, but a weak throw home from Michael Morse is off the mark. Reyes scores, 1-0 New York. An alert Wilson Ramos catches Turner too far off second, and a 7-2-4 DP ends the first...

4. Bunting For A Run: Michael Morse doubles to left-center and off the wall, driving a 2-1 change outside into the gap to start the second. A sac bunt by Danny Espinosa moves Morse to third, but Jerry Hairston pops out and Gorzelanny grounds out to strand Morse there...Jose Reyes reaches first safely on a grounder. Ian Desmond backhands it deep in the hole at short, but makes an ill-advised attempt to throw Reyes out and throws it by Adam LaRoche at first. The Mets don't bunt their leadoff man over. Gorzelanny throws a pick attempt by first to finally move Reyes up after Justin Turner and Carlos Beltran fail to. The Nats pitch around Jason Bay, walking him intentionally. Danny Murphy grounds out to second to end the Mets' third. Still 1-0 NY...

3. Nats No's.9-12:  Niese puts nine Nats in a row down in order after Morse's leadoff double in the second. Tom Gorzelanny gives up a one-out double to Scott Hairston and a one-out walk to Ruben Tejada before collecting the last two outs of the fourth. An 18-pitch fourth and Gorzelanny's thrown 76 pitches, 45 strikes through four innings. Danny Espinosa, Jerry Hairston and Tom Gorzelanny go down in order and Niese sends twelve-straight back to the bench. Gorzelanny issues a leadoff walk to Justin Turner in the Mets' fifth. Carlos Beltran reaches too on a pop to center that drops in for a hit. Gorzelanny gets Jason Bay to chase a 2-2 change. Danny Murphy grounds into a force at second. Ronny Paulino swings through a 1-2 offspeed pitch. 1-0 after Mets after five. Gorzelanny at 97 pitches.

2. STOP BUNTING!: Ian Desmond bunts into a force at second after an opposite field line drive single by Roger Bernadina starts the sixth. Desmond gets too much of it trying to bunt for a hit and Danny Murphy's all over the bunt, cutting the lead runner, Bernadina, down at second. Jayson Werth pops out behind first. Wilson Ramos K's swinging...Gorzelanny puts the leadoff runner on again in the sixth. Two outs later an intentional walk to Jose Reyes puts two on. The Nats' lefty leaves a 1-1 slider up for Justin Turner, who doubles to center, over the Shark's, uh Roger Bernadina's head and to the track. Two-run double, Gorzelanny's done. 3-0 Mets in the sixth. Nats' right-hander Henry Rodriguez takes over for Gorzelanny and gets the third out with four pitches, popping Carlos Beltran up.

1. LaRoche, Not April Anymore: Adam LaRoche's second K of the night starts the seventh. Niese get the Nats' first baseman swinging with a 1-2 bender. LaRoche is 0 for 3 with a .179 AVG after the strikeout. Michael Morse lines out to second. Danny Espinosa stretches Niese out a little and keeps the top of the seventh alive with a two-out double to left. Jerry Hairston takes a two-out walk. Pinch hitter Brian Bixler reaches on an infield single with the help of a weak throw from Justin Turner and a sudden downpour that soaks the entire field. Bases loaded for Roger Bernadina. Niese gets two called strikes after starting Bernadina 3-0, and the Shark fouls two off before sending an inning-ending, runner-stranding groundout to first. 3-0 New York.

0. Shut Out: After a scoreless frame from Todd Coffey, whose elbow is apparently fine. Ian Desmond shoots a low liner to center to start the Nationals' eighth and he steals second as Jayson Werth stares a two-strike curve from Jason Isringhausen all the way in for a called strike three. Wilson Ramos flies out to center. Desmond takes third. Adam LaRoche's average is down to .177 after he flies out to center. Still 3-0 Mets. Nats' left-hander Doug Slaten throws a scoreless eighth for the Nationals,  Michael Morse lines to center for a single on the first pitch of the ninth. Danny Espinosa pops out. Jerry Hairston walks to put two on for pinch hitter Laynce Nix. Fly to left, two down. Roger Bernadina flies to left to end the game. The Nationals finish the night 1 for 9 with RISP, 10 batters left on base. The Nats are shut out for the sixth time in 42 games. 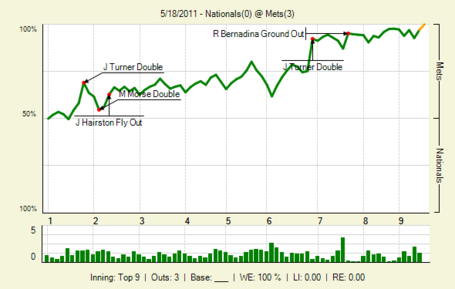