5. Gee Whiz! (ed. note - Really? That's your title?"): Dillon Gee's Major League debut on September 7, 2010 was against the same Washington Nationals he faces this afternoon in Flushing, Queens, NY's Citi Field. The 25-year-old right-hander held the Nats to a run on two hits in 7.0 IP that day, carrying a no-hitter into the 6th when his current teammate, Willie Harris, then a Nat, hit a solo HR to start the frame for the Nats only run off Gee that day. Nats' leadoff Roger Bernadina man makes Gee earn the first out of the afternoon today, battling for 13 pitches and fouling off eight two-strike pitches before taking a curve for a called strike three. Ian Desmond and Laynce NIx go down in order and the Mets' starter has a scoreless first. After a quick 1-2-3 first by Livan Hernandez, Gee walks Jayson Werth to start the second, but Adam LaRoche quickly erases the runner with a double play grounder that drops his average to .176 on the season. Scoreless top of the second for Gee...

4. SSP: Livan Hernandez strikes out three of the first six batters he faces, one swinging and two staring. Carlos Beltran swings through a 67 mph bender in the Mets' first. Justin Turner lays off a 64 mph 0-2 slow curve in the dirt, then takes strike three on another 67 mph floater. Jason Pridie fouls off a full-count curve at 68 mph then takes a "fastball" for a called strike. Two scoreless for the Nats' soft-tossing right-hander. Ruben Tejada sneaks a grounder by Alex Cora at third in the Mets' third, but a failed sac bunt attempt by Gee follows and LaRoche and Ian Desmond turn the first double play of the season on Jose Reyes to help Livan Hernandez complete three scoreless innings in New York.

3. 1 for 15: Josh Thole knocks a 77 mph changeup from Livan Hernandez into center for a leadoff single in the Mets' fourth, breaking an 0 for 14 slump for the Mets' catcher. One out later Jason Bay sends the Mets' catcher first-to-third on a sharp grounder through short and into left. Livan Hernandez gets Danny Murphy to fly unproductively to center for out no.2, but Justin Turner gets New York on the board, connecting on an 0-1 slider that falls in short center for an RBI single and a 1-0  Mets' lead. Dillon Gee comes back out after New York goes up and throws his fifth scoreless frame. 15th scoreless inning in a row for the Nats, who still don't have a hit off the Mets' right-hander. 1-0 NY in the 5th.

2. Livan Hates No Hitters: Jason Bay catches a fly ball to left off Pudge Rodriguez's bat for the first out of the Nationals' sixth. One down. Alex Cora's groundout gives the Mets' starter two outs in the sixth and Dillon Gee's got the pitcher up next, one out away from his sixth no-hit inning. LIvan Hernandez singles to center on a first-pitch fastball and the New York Mets have now gone 7,841 games without a (regular season) no-hitter, but they still have a 1-0 lead after the sixth.

1. Rally? Nope: The Nationals threaten in the eighth, with Ivan "Pudge" Rodriguez taking a one-out walk and Alex Cora reaching on a single to center. Pinch hitting specialist Matt Stairs flies out to left for the second out of the frame, and Dillon Gee's finally done after 7.2 scoreless innings pitched. The two runners on base are his, however. Mets' right-hander Tim Byrdak comes on to face pinch hitter Michael Morse, who grounds out to second on the first pitch he sees from the new pitcher. 1-0 NY after seven and a half.

0. Phil Cuzzi Blows Call, Period: Still 1-0 New York after eight. Francisco "K-Rod" Rodriguez gets a ground ball to first from Ian Desmond. One down in the Nats' ninth. Laynce Nix doubles on a low liner by third and into foul territory. Jayson Werth comes up with one on and one out. Werth grounds sharply to third with Nix running, and Justin Turner is surprised to see Nix pass in front of him. Turner double pumps, throws and the throw to first pulls Danny Murphy off the bag...clearly. The replay shows Werth beat the throw too. But Werth's still called out. Jim Riggleman comes out to argue but to no avail. Umpire Phil Cuzzi blows the call. Riggleman argues some more. Adam LaRoche is up with a runner on third and two down. Groundout to second, ballgame. Nats shut out again. Seventh time this year the Nats have been shut out, and the second time in two games...1-0 Mets win. 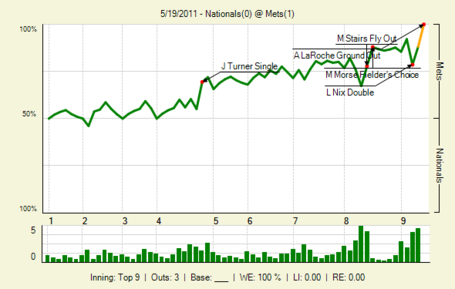