5. Military Appreciation Night: Patriotic blues for the Nationals on Military Appreciation night in D.C. Dark blue red-brimmed curly-W cap on his head, white pants, single stripe on the leg, the stars and stripes curly-W logo on the front of his darker blue alternate jersey with its red and white piping, Tom Gorzelanny gives up leadoff double to Aaron Rowand on the very first pitch of the game. Jerry Hairston, Jr., in left tonight, plays it off the wall to hold Rowand at second, but Freddy Sanchez's sac bunt moves him to third. Gorzelanny, however, gets back-to-back groundouts to Brian Bixler at third, and he's through an eventful first in the nation's capital with a 0 on the board. Gorzelanny retires six-straight batters after the leadoff hit, Giants' lefty Madison Bumgarner retires six straight, no score after two.

4. Bunting FAIL: Bumgarner's perfect through three. Tom Gorzelanny takes a nice cut but K's to end the third, then retires the Giants in order in the top of the fourth. Danny Espinosa grounds out to second, that's ten in-a-row from the San Francisco starter. Rick Ankiel battles, fouling pitches down both lines before flying to center on the ninth pitch he sees. Jayson Werth grounds out to Mike Fontenot at short. Twelve in a row. Wilson Ramos breaks up the potential perfect game in the fifth, when he doubles off the left field wall, 377 ft from home for the Nats' first hit of the game. Ian Desmond bunts him over to second. Michael Morse K's looking. That's two down. Jerry Hairston with a check-swing K. Punched out...

3. Dern Rowand: Aaron Rowand's not so lucky the third time around. After a double and a single in his first two AB's it's a backward's K to end Gorzelanny's sixth strong inning. The only two hits he's allowed have been to the Giants' center fielder. Brian Bixler flies out to center. Bumgarner gets help from shortstop Mike Fontenot, who robs Gorzelanny diving for a pop behind second. Danny Espinosa K's swinging through an 0-2 fastball upstairs. One hitter through six, and Gorzelanny has a 1-2-3 seventh. Groundout, groundout, fly to left. Posey, Burrell, Huff. Gorzelanny's got a two-hitter through seven.

2. VAMOS RAMOARSE!!!!: Wilson Ramos rips a two-out grounder to third and it somehow gets through Miguel Tejada's glove. Ruled a hit by the official scorer, but that's too generous. Ian Desmond lines over second and into center, that's a hit and Ramos is running. First-to-third™ and two down for Michael Morse and he rips the first pitch from Bumgarner back up the middle. Three-straight two-out hits, 1-0 Nats. Make that four, Jerry Hairston doubles to center, Desmond scores. 2-0 Nationals after seven.

1. STOREN WARMING: Rick Ankiel dives for a line drive to center by Cody Ross. Nope. Can't come up with it, losing the ball as he rolls after diving. The Giants' first hit in 15 at bats brings Eli Whiteside and his .167/.219/.267 split vs LHP to the plate. Whiteside battles for six pitches before he's punched out on a called strike three. Gorzelanny's through 8.0 IP, 3 H, 0 R, 0 BB, 4 K's, 95 pitches, 62 strikes, 7 GO, 11 FO...The Nats go down in order in the eighth. Gorzelanny's not coming back for the ninth. Drew Storen on to end it. Line drive to short from Rowand. Desi pulls it down. 1-2 slider outside to Freddy Sanchez. Called strike three. Buster Posey works the count full...and walks. Tying run on. Pat Burrell. Ground ball to short, Ian Desmond fields and throws. Ballgame. Nats take three of four at home from the Giants. Pull even at 14-14 before they go out on the road. 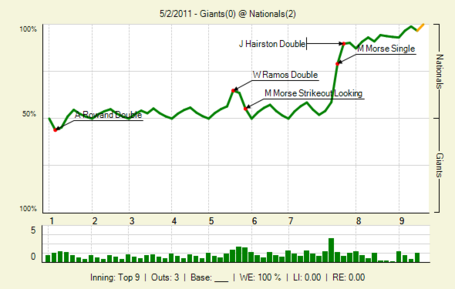