5. High Powered Offense: The Washington Nationals don't change anything about the lineup that produced 19 hits and 17 runs against the Orioles in last night's series opener, except for the starting pitcher. Nats' lefty John Lannan matches the O's Jeremy Guthrie with a quick 1-2-3 first of his own, and he does on seven pitches, five of them strikes to Guthrie's fifteen and seven in the top of the frame. No score in the second, Lannan comes back with another 1-2-3 inning, sending six O's in a row down on eight pitches this time. Guthrie's got two down in the third, with Jerry Hairston, Jr. on first after a one-out single. Ian Desmond rips a 1-0 slider down the line in left and into the stands on one hop for a ground-rule double that moves Hairston to third. Hairston and Desmond score on a grounder to first by Laynce Nix that eats up O's first baseman Brandon Snyder. E: 3, 2-0 Nationals after two and a half...

4. 40-Pitch Frame: After two quick frames, Lannan walks the first batter in the third, then gets behind Nolan Reimold. Full count and a fastball inside never gets there, two-run HR to left by Reimold and a tie game in the Orioles' third. 2-2. Adam Jones bunts his way on with two down, and scores the go-ahead run on a single to left by Nick Markakis that Laynce Nix fumbles with before throwing to the cutoff man, Ian Desmond, who hesitates and throws late to home as Jones slides in. 3-2 O's. 4-2 Orioles, when Vladimir Guerrero drives a full-count slider inside into left. A walk, two-run HR and four singles for the O's in the third, 40 pitches for Lannan to get through the frame.

3. 40-20-9-9: Lannan strikes out the side, surrendering only a two-out single in a 20-pitch fourth, and the Nats' left-hander needs just nine pitches to retire the O's in order in the fifth. Laynce Nix walks for just the fourth time in 100 plate appearances with one down in the Nats' sixth. Jayson Werth follows with a line drive single to right-center, but Nats' cleanup man, Matt Stairs, grounds into a 4-6-3 inning-ending DP. 4-2 O's after five and a half. Stairs now 2 for 29 on the year. John Lannan gives up a double in the O's sixth, but gets through another scoreless frame on just nine pitches. 93 pitches, 90 strikes through six innings of work.

2. RAPTURE!!....Waits....Waits: O's first baseman Brandon Snyder and infielder Robert Andino hit back-to-back opposite field doubles to right to start the O's seventh and chase John Lannan. Snyder goes the other way with a 1-1 fastball. Andino drives a 2-2 slider to right. Snyder scores on Andino's double and Lannan's done with the O's up 5-2 in the seventh. 6.0 IP, 9 H, 5 R, 5 ER, 1 BB, 6 K's, 101 pitches, 65 strikes, six groundouts, three flyouts. Nats' right-hander Cole Kimball comes on. A groundout moves Andino to third, and an RBI single by Nick Markakis scores the Orioles' 6th run, 6-2 Baltimore, 6 R, 6 ER for Lannan. The Orioles hit four singles in a row before the second out of the seventh, and the O's break out to an 8-2 lead before the inning's over.

1. No O Tonight: After a two-run third, the Nats get just three hits through the next five innings while the O's pile it on. Koji Uehara vs Matt Stairs to start the ninth. The veteran professional pinch hitter flies to left and it glances off Nolan Reimold's glove after a long run by the O's left fielder. Scored a double. Stairs' third hit overall and his first extra base hit of the year. Michael Morse grounds back to the pitcher. One down. Stairs to third, and he scores on a sac fly by Ramos. 8-3 Orioles. That's how it ends.

• Doghouse's Post Game WPA Graph:"Game 45: Should have saved some runs from yesterday.": 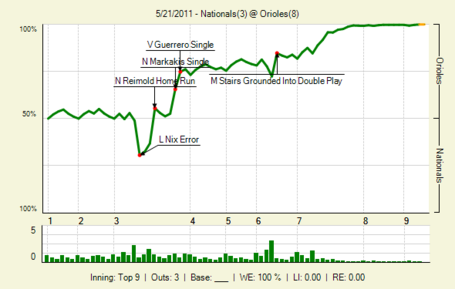