5. Innings Limit: Jordan Zimmermann was scheduled to pitch the second of two games against the Pittsburgh Pirates last Tuesday, but the game was postponed by rain and the Nationals took advantage of the opportunity to have the '07 2nd Round pick skip a start since he's on an innings limit this year in his first full-season back following Tommy John surgery in 2009. "We've got Jordan Zimmermann coming back from Tommy Surgery, so we're looking for a couple opportunities, this one and maybe around the All-Star Break where we really put him on the deep end of coming back to pitch," Nats' Skipper Jim Riggleman explained during an interview on MLB Network Radio's "First Pitch" with hosts Rob Dibble and Jim Memolo. "So he's going to get nine days in between starts and then at the All-Star Break he'll probably do the same thing so it will allow us to keep him deeper into the season."

4. Riggs Tossed: Before Zimmermann had even taken the hill, however, Roger "The Shark" Bernadina got a drag bunt down to start the Nats' first and got it by the O's pitcher Chris Tillman. Robert Andino tried to make a toss with his glove but it was too late. Safe at first, but Bernadina's called out at the plate, however, according to home plate umpire Todd Tichenor, who says The Shark stepped out of the batter's box and on home while bunting. 2-Unassisted in the books. Nats' Skipper Jim Riggleman is livid. An animated discussion follows and the Nationals' manager is tossed during the first at bat of the game. Two pitches in, Riggleman's gone.

3. Ground Rules: Pudge Rodriguez and Jordan Zimmermann decide on a 3-2 bender after a 2-2 fastball inside to Luke Scott is called ball three by the home plate ump. Zimmermann drops it in the dirt, ball four. Mark Reynolds doubles to center in the next at bat, or just to the right of it, and bounces a ground-rule double over the wall. Scott has to stop at third, as per the ground rules. Two on and two out for O's SS J.J. Hardy, but Jayson Werth's all over his soft liner to right and Zimmermann's through two scoreless. 28 pitches in the second. Alex Cora walks with one down in the Nats' third and he takes second on a double Roger Bernadina bounces off the out-of-town scoreboard. Second and third with one down. Ian Desmond goes down chasing a 2-2 slider outside, and Laynce Nix K's swinging through an 0-2 slider inside and low. Chris Tillman through three scoreless of his own.

2. Cora = Pinball Wizard: Jayson Werth pulls a curve to left and into the corner on the first pitch of the fourth. Leadoff double for Werth, his 10th of the season. Wilson Ramos chases a 2-0 pitch up high, but works the count full and walks when Tillman tries to get the rookie catcher to chase a slider outside. Michael Morse pops up to short right on a 2-2 slider. Danny Espinosa works the count full, fouls off two fastballs and takes a slider in the rear, HBP loads the bases. Pudge Rodriguez flies out to right. Werth stays at third. Alex Cora grounds back to the mound, off Chris Tillman's foot and over to third, unplayable. 1-0 Nationals when Werth crosses. Roger Bernadina hits another towering fly to right. Nick Markakis tracks in and makes the catch with his back against the wall in right and his glove fully extended. 1-0 Nats after three and a half.

1. Zim(n) + Pudge = +Zim(n): Jordan Zimmermann's back out with a 1-0 lead, and he throws a quick 1-2-3 fourth, retiring Nick Markakis, Vladimir Guerrero and Matt Wieters on nine pitches. Wieters K's swinging through a 2-2 change on Zimmermann's 65th pitch of the game, 41 strikes for the Nats' right-hander. Zimmermann sets the O's down in order in the fifth, retiring the eighth, ninth and tenth-straight Orioles. Luke Scott grounds to second. Mark Reynolds takes a full-count fastball outside for a called strike three, Nats' center fielder Roger Bernadina's back at the wall this time, and he closes his glove on J.J. Hardy's long fly just as he crashes into the wall. Still 1-0 Nats, Zimmermann's 12-pitch 5th has him at 77 pitches, 50 strikes through five innings.

0. One-Hitter Ruined By Vladi: A leadoff single by Michael Morse in the Nats' sixth is wasted. Jordan Zimmermann's back on the mound in the O's sixth. Still 1-0 Nationals. Robert Andino grounds to second. Felix Pie battles for six pitches before he takes a 78 mph 2-2 curve for a called strike three. Adam Jones pops up to the infield, Michael Morse makes the catch foul of first, and Jordan Zimmermann holds the Nats' 1-0 lead through six. O's 11-13 go down to the Nats' right-hander. Still 1-0 after the Nationals' seventh.

Nick Markakis singles to right on a first-pitch fastball in the bottom of the seventh, Zimmermann's 88th pitch of the game. PItches 89 and 90 get him up 0-2 on Vladimir Guerrero, but he hangs an 0-2 curve to the Future Hall of Fame slugger, who reaches down and rips into it, depositing his 5th HR three or four rows deep in the left field stands. Line drive HR, two-run blast, 2-1 O's. One out later, Luke Scott singles, and Zimmmermann's done: 6.1 IP, 4 H, 2 R, 2 ER, 1 BB, 5 K's, 1 HR, 94 pitches, 64 strikes. Zimmermann entered the inning with a one-hitter...Tyler Clippard walks two to load the bases, but gets Felix Pie swinging to end the O's seventh. 2-1 Orioles.

-1. Strike'em Out, Throw'em Out: O's right-hander Koji Uehara retires the Nationals in order in the eighth. O's closer Kevin Gregg gets a weak grounder to second from Pudge Rodriguez. One down. Matt Stairs takes a one-out walk from Gregg. Brian Bixler on to run. Roger Bernadina works the count full and K's looking at a slider, Bixler's running and thrown out by O's backstop Matt Wieters. Strike'em out, throw'em out to end the game. The Nationals go 1 for 8 with runners in scoring position. 9 LOB. 2-1 O's win. 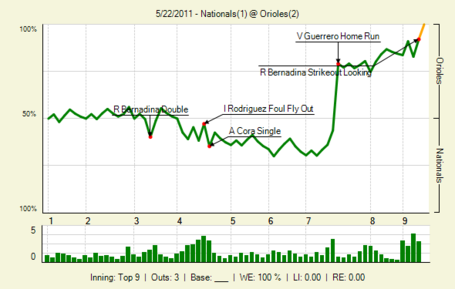