5. Bad News For LaRoche: No one was expecting good news after Adam LaRoche and his .172/.288/.258 slash line went to see a doctor for a second opinion earlier this week and was placed on the 15-Day DL. A "slight" tear in his left labrum, diagnosed during Spring Training when the first baseman experienced pain while throwing was today upgraded to a "large" tear of the labrum and, "some tearing in the rotator cuff," as MLB.com's Bill Ladson (@washingnats) reported on Twitter just before tonight's game. In the tweet that followed, the MLB.com writer quoted the 31-year-old first baseman, who signed a 2-year/$16M dollar deal this winter, lamenting that the diagnosis was, "'...not what I wanted to hear,' Adam LaRoche said about his shoulder injuries. 'I wish it didn’t take me 45 games to figure out something was totally wrong.'"

4. Not In Front Of Hart: Livan Hernandez walks the leadoff man, Rickie Weeks, in the first, in front of Corey Hart, which is probably not a good id--BANG!! Brewers' outfielder Corey Hart unloads on a full-count fastball that lacks the sink Livan intended. Two-run HR to left and 2-0 Brewers in the bottom of the first. After he gets Ryan Braun to swing through a 65 mph full-count curve, which frustrates the Brewer. Prince Fielder's not amused either after Hernandez hits him with a two-strike fastball. Two outs later Fielder's stranded at second, and Livan's through a 32-pitch first...

3. Mr. National At The Plate: Michael Morse doubles to right-center, after homering there last night, and he takes third on a bunt single by Danny Espinosa when Brewers' third baseman Casey McGehee's throw to first pulls Prince Fielder off the bag. Two on, no one out. Jerry Hairston pops to the infield. Brian Bixler K's swinging, and it's up to Livan Hernandez to do it himself and he does. RBI line drive single to left, 2-1 Brewers' lead in the second. Ian Desmond reaches on an infield single in the Nats' third, and steals his 15th base in 16 attempts with Jayson Werth up against Chris Narveson. Werth and Wilson Ramos walk to load the bases and Michael Morse clears them with his first career grand slam. 5-2 Nationals on the Nats' first baseman's 4th HR of the year and second two games into this series.

2. Run Shark Run: Roger Bernadina lines to center and into a force a force at second, since Livan Hernandez was on first after a leadoff hit in the Nats' fourth. Carlos Gomez can't get to The Shark's liner, but Livan has to wait to see if he does and he's got no chance of beating the throw in. Bernadina swipes second with Desmond at bat, takes third on a throwing error by Jonathan Lucroy, and scores when Desmond goes outside for a high fastball and drives it into center for an RBI double. 6-2 Nationals after three and a half loooong innings. Narveson's up to 82 pitches....and he's done: 8 H, 2 BB, 6 R, 6 ER, 3 K's, 82 pitches, 50 strikes. 6-2 Nats. Livan gets two quick outs in the fourth, but the Brewers' catcher gets hold of a first-pitch fastball that's out to left in a hurry. Solo HR, 6-3 Nats.

1. Call It, Werth!!!: Danny Espinosa tracks a weak pop off Rickie Weeks' bat to short right and the Nats' second baseman attempts to make a one-handed catch, but misses. Weeks is running out of the box, and he slides in safely at second. Corey Hart lines right to Jerry Hairston at third. One down. A wild pitch moves Weeks to third. Carlos Gomez K's chasing a 70 mph bender. Two down. Prince Fielder lines out to short, Livan is through five with the lead. 6-3 Nationals. Casey McGehee starts the Brewers' sixth with a single, Yunkiesky Betancourt ends it one out later with a double play grounder to Danny Espinosa, Ian Desmond and Michael Morse, 6-3 Nats after six.

0. ABullpen:  Tyler Clippard replaces Livan Hernandez in the seventh, and he lets the Brewers back in the game. A one-out walk to Craig Counsell brings Rickie Weeks to the plate and a hanging slider gets the Brewers within one. Two-run blast to left and into the second deck. 6-5 Nationals after seven. Sean Burnett gets the first out of the eighth, and the Nationals turn to Henry "Lightning" Rodriguez. Casey McGehee works the count full and drives a 100mph fastball to right for a one-out single. Mark Kotsay K's swinging through a 100mph heater. Brandon Boggs walks with two down. Jonathan Lucroy reaches down for and fouls off an 0-2 slider and then slices a single to right, and fair, just inside the line, two runs score, 7-6 Brewers. Brewers' closer John Axford gets Laynce Nix looking. Roger Bernadina K's swinging. Ian Desmond K's...but it gets by Jonathan Lucroy. Desi's safe at first. Jayson Werth lines a 1-0 fastball to center. Two on, two out for Wilson Ramos. Ramos walks. Michael Morse...flies out to right. Ballgame. 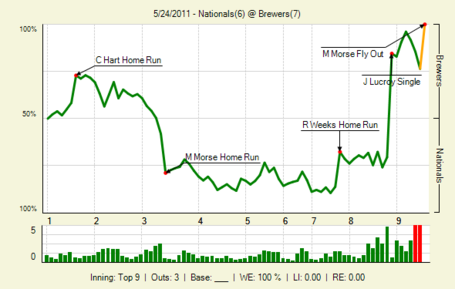