5. No-Trade Clause Snub: New Brewers' right-hander Zack Greinke was injured this Spring, so he's making just the fifth start of his first season in Milwaukee after a trade this winter from the Kansas City Royals club that drafted and developed the former Cy-Young-Award-winning right-hander. Greinke made a decision this past offseason to turn down what was reportedly a 5-year/$90-$100 million dollar extension offer from the Nationals, using his partial no-trade clause to block a deal the Nats and Royals had brewing (ed. note - "Pun intended."). The 27-year-old starter later told Washington Post writer Dave Sheinin, in an article entitled, "Desire to win now kept Greinke from joining Nationals", that he wanted to go somewhere he could win now. "'Not saying [the Nationals] don’t have a chance,'" Greinke told the WaPost reporter, "but I was trying to get to a team that was looking really good at the moment. And I believe [the Nationals] will be good eventually.'" The Brewers enter today's game at 26-23 to the Nats 21-27.

4. Not Hart, Not Braun, But Prince: Jason Marquis is careful, pitching Corey Hart inside throughout a seven-pitch AB that ends in a one-out walk in the Brewers' first. Ryan Braun connects with a 2-1 slider and drives it to left for a single. Another 2-1 slider to Prince Fielder ends up at the wall in right-center, two runs score as the Milwaukee Brewers get out to an early lead in the matinee series finale. 2-0 Milwaukee after one. Zack Greinke strikes out three of the first six batters and retires six of the first seven Nats he sees. 26 pitches through two for Greinke, Marquis responds with a nine-pitch 1-2-3 bottom of the second after a 24-pitch first.

3. Not Again: Rickie Weeks starts the Brewers' third with a leadoff double to left field. Marquis has a 1-1 change crushed by the Milwaukee infielder, who takes third on a productive flyout to center by Corey Hart. Marquis and Braun battle to a full count and the Brewers' outfielder takes a one-out walk to put two on for Prince Fielder. A sac fly to left scores Weeks from third, and Laynce Nix's throw home allows Braun to take second. The throw from Nix doesn't cost the Nats, but aesthetically speaking...uh...3-0 Brewers, two down.

2. The People's Champion: Jayson Werth singles off Zack Greinke to start the Nats' fourth. Laynce Nix drives a 1-1 fastball to right field and over the wall on a bounce for a ground rule double. Second and third. Greinke's in trouble in the fourth, and it's about to get worse as Michael Morse steps to the plate and launches a 79 mph first-pitch curve to left-center for a three-run HR, his third of the three-game series with Milwaukee. 3-3 ballgame in the fourth. After the HR, Morse is now 5 for 11 in the series with 3 HR's, 8 RBI's. 10 for 20 with 5 HR's, 12 RBI's on his career in Miller Park.

1. No.2 Of His Career: When Zack Greinke struck Jason Marquis out in the Nats' third, the Brewers' right-hander dropped three consecutive curves on the Nationals' pitcher to get a swinging K. Marquis first chance to return the favor comes in the fifth and he starts the Milwaukee right-hander, a career-AL pitcher with just one HR on his resume, six years ago, with a belt-high fastball inside. Supposed to sink, but it doesn't and Greinke destroys it. High fly ball to left and GONE!! Solo HR to start the fifth, 4-3 Brewers on Greinke's second hit of the season. Greinke's last HR came in Interleague play: June 10, 2005 vs ARI off Russ Ortiz.

0. GreinKe: After setting the Nats down in order in the top of the seventh, Greinke's up to 100 pitches even and 10 K's after he gets Jerry Hairston swinging to end the frame. Eight straight Nats go down following Roger Bernadina's one-out single in the fifth. Cole Kimball takes the mound for the Nats in the Brewers' seventh, and issues a one-out walk to Rickie Weeks. A wild pitch moves Weeks into scoring position and after an odd pitch-count controversy and walk to Ryan Braun, Prince Fielder drives Weeks in with an RBI single to left that makes it 5-3 Milwaukee.

-1. Comebac---: Roger Bernadina reaches first safely on an error by Rickie Weeks. A Jayson Werth single sends Bernadina from first to third, and he scores the Nats' fourth run on a sac fly to left by Laynce Nix. 5-4 game in the eighth. LaTroy Hawkins, who replaced Greinke, is replaced by Kameron Loe. Michael Morse is looking for his fourth HR in three games, but he gets a nasty 0-2 slider outside instead, and chases it. Werth stranded, Nats trail by one. Make that two. Brewers' catcher Jonathan Lucroy reaches on an "error" at third by Jerry Hairston. One out later he scores from first on a double to left by Yuniesky Betancourt. 6-4 Brewers. That's how it ends three outs later when the Nats hits three groundouts in the ninth.

• Miss The Game? The DC Faithful Are Starting To Turn Away...Or Maybe It Was Just A Day Game Crowd... 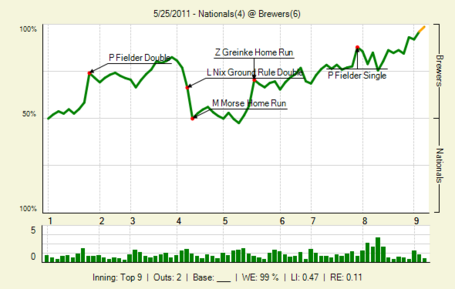