Washington Nationals Win On Michael Morse Walk-Off After Blown Save In 9th. 2-1 Over San Diego Padres.

Share All sharing options for: Washington Nationals Win On Michael Morse Walk-Off After Blown Save In 9th. 2-1 Over San Diego Padres.

5. Lannan Waltzes Through Three: After a "dismal" (is that the right word) 1-7 road trip, the Nats are back home in the nation's capital to take on the San Diego Padres, and they get off to a good start with left-hander John Lannan throwing a quick 1-2-3 first inning in which he needs just 11 pitches to put the Padres down in order. Another 11 pitches, another scoreless frame for Lannan in the second and Michael Morse, whose bat got hot during the last series in Milwaukee starts the Nats' second with a single to right. A groundout to the mound by Wilson Ramos moves Morse to second. A groundout by Danny Espinosa accomplishes little, and a fly to right off Jerry Hairston's bat strands Morse to end two scoreless in D.C. Nine pitches later, Lannan's through three, another quick frame and Lannan's through the order once. 31 pitches. Then the rain comes...

4. 47 Minutes Later: After sheets of rain, lightning above Nats Park and strong winds delay play for 47 minutes, John Lannan's back out on the mound against Padres' shortstop Jason Bartlett, and the Nats' lefty picks up right where he left off, striking Bartlett out with a full-count fastball that's called strike three. Lannan issues a two-out walk to Ryan Ludwick, the first Padre to reach base, but a groundout to third off Jorge Cantu's bat ends a scoreless fourth for Lannan. Jayson Werth, Michael Morse and Wilson Ramos go down in order in the Nats' fourth, and John Lannan's right back out on the mound, throwing out Cameron Maybin at first on a close play that has the Padres' skipper Bud Black out to argue for the second time tonight. Chase Headley breaks up Lannan's no-hit bid with a one-out single to center. The Nationals fail to turn a double play on a grounder to third by Padres' catcher Rob Johnson, but former Nats' infielder Alberto Gonzalez's groundout ends Lannan's fifth scoreless frame. Still no run-support.

3. Right Side Danny: Padres' lefty Clayton Richard starts Danny Espinosa with a 90 mph fastball for a called strike then follows up with a change that Espinosa spits on, ball, 1-1. Richards comes back with another change and Espinosa destroys it. Deeeeeep to left and off the back wall of the visitor's bullpen. It's 377ft to the wall. Do your own maths, 1-0 Nationals in the fifth. Five of Espinosa's seven HR's have come against right-handers, but this time the Nats' switch-hitting second baseman made a lefty pay, second HR off left-handers. 1-0 Nats after five. Five pitches later, Lannan's through six and only up to 68 pitches, 49 strikes.

2. 77 Pitches Through 7 IP: A nine-pitch seventh, another 1-2-3 frame by John Lannan, and the Nats' lefty has thrown just 77 pitches through seven innings pitched. Lannan almost adds to the lead himself, sending a long fly ball to the track in right to end the bottom of the eighth. The Nats' lefty is back on the mound, without his third baseman, Jerry Hairston, Jr. who got tossed for arguing with the home plate umpire after he'd tried to call time and didn't have the request granted. Alberto Gonzalez singles with two down in the Padres' eighth. Lannan issues a two-out walk to pinch hitter Brad Hawpe and he's done. Lannan's line: 7.2 IP, 2 H, 0 R, 2 BB, 5 K's, 93 pitches, 66 strikes, 14 groundouts, 2 flyouts...Drew Storen vs Padres' OF Chris Denorfia, and the Nats' closer gets the first of four outs he;ll be asked to get tonight with a 1-2 slider that's called strike three!! Filthy.

1. STOREN WARNING: Drew Storen's back out for the ninth and looking for his 10th save of the season in 10 opportunities, but he's not going to get it. First-pitch fastball to Jason Bartlett, who sends it sailing through the night air, out to left and into the stands. Tie game. Storen's first blown save of the season and a tie game in the ninth. 1-1 on Bartlett's 1st HR of the season. Storen retires the next three Padres, striking the last two out, but it's tied and headed to the bottom of the nint---- MOARSE!!! MOARSE!!! MOARSE!! MICHAEL MORSE WINS IT WITH ONE SWING!!! GONE GOODBYE!! Nats win! Nats Win!! Hanging slider from Padres' reliever Mike Adams and Michael Morse has four HR's in four games...According to Dave Nichols from the Nats News Network (@NatsNewsNetwork): "Last time a #Nats hit homers in four straight: Ryan Zimmerman, Aug. 3-7, 2009. Morse now joins him with his walk-off against #Padres."

• Jim Riggleman on Michael Morse: "He's swinging very well. We've all seen this from Mike. We saw it last year, we saw it in Spring Training, it got away from him a little bit for whatever reason. Now he's just playing baseball, not necessarily trying to hold on to a position, just [going] and trying to play the game. And he's not overthinking things, he's just hacking and the ball really jumps off his bat. The ball he hit in Milwaukee, to right-center, is about as good as I've seen a right-hander hit a ball that way and that's an indication of his power. He doesn't have to crush a ball, they go for him, he's just got that natural power that the ball jumps off his bat unbelieveable." 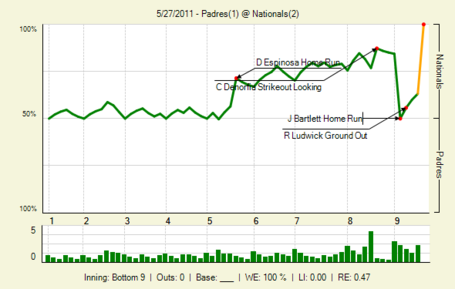