5. Leadoff Man: Rick Ankiel's inserted in the leadoff spot in the Nats' order today, and playing center, and he makes his second somewhat spectacular catch in the last two days to end the top of the first in this afternoon's game against the Padres. Last night Ankiel was twisting in the wind to make a dramatic diving (falling?) catch late in the Nats' win. This time it's early, with Ankiel saving Jordan Zimmermann from trouble with a runner on after an interference call on Pudge Rodriguez. Brad Hawpe drives a long fly to center and Ankiel sprints back just in time to make a diving catch on the warning track to take extra bases away from Hawpe and a potential early lead away from the Padres. San Diego starter Tim Stauffer issues three-straight one-out walks to load the bases after Ankiel grounds out on the first pitch he sees in the Nats' first, but Michael Morse is first pitch swinging too and he grounds into an inning-ending DP...

• Riggleman on Morse's groundout: "We got out of the blocks there with a good inning there with bases loaded and three really good at bats, taking some pitches to get three walks in a row and [Stauffer] just made a great pitch. Mike has been swinging great and we really felt good about how that inning was going because of three really good at bats to set it up and then [Stauffer's] like a couple other guys, he's got a good sinker and when he gets it where he wants it he got us. That's one little portion of the game, the rest of the game...we just didn't get it done offensively, there's not an explanation for it, it just didn't happen."

4. Don't Walk The Pitcher: Jordan Zimmermann walks the leadoff man, who happens to be the opposing pitcher, Tim Stauffer, in the Padres' third. Jerry Hairston looks absolutely Zimmerman-esque when he dives for a sharp grounder to third in the next AB, throwing to second to get the force on the Padres' pitcher on an Eric Patterson ground ball. One down. Zimmermann strikes Jason Bartlett out as Patterson successfully steals second, but the Nats' right-hander picks Patterson off to end his third scoreless frame. 0-0 score through two and a half. Ian Desmond walks with one down in the Nats' third, Desi's second walk in 2 AB's, but the Nats' shortstop's caught stealing for only the second time in 17 attempts this season, and Jayson Werth lines out to end the Nats' third.

3. Tea-Coat-E: Padres' rookie Blake Tekotte (an '08 3rd Round pick) collected his first Major League hit in his first at bat of the afternoon, and the 24-year-old outfielder collects his first triple and his first RBI in the Padres' fourth. Fly ball to right by Tekotte and Werth's at the track, arm extended when it bounces off his glove and falls to the dirt for an RBI triple. Chase Headley, who'd singled with two down in the previous AB, scores from first to give the Padres a 1-0 lead. Tekotte (pronounced Tea-coat-e) scores his first run on an RBI single to left by Padres' catcher Kyle Phillips, and it's 2-0 San Diego after four in Nats Park.

2. Stauffed: The Nationals send six up and Padres' right-hander Tim Stauffer sends five of the six down. Pudge Rodriguez beats out an infield single to start the fifth, but Jerry Hairston's DP grounder erases the runner. The next four go down in order and the San Diego starter has a 2-0 lead in tact heading into the seventh. Jordan Zimmermann's done after a hundred pitches, replaced by Sean Burnett in the top of the seventh. Burnett throws a scoreless frame, and Stauffer's back out for the bottom of the inning. Laynce Nix leading off for the Nats, and he gets hold of a 1-1 change, which he drives to right and over a leaping Eric Patterson into the Nats' bullpen. 2-1 game. Michael Morse follows with a single to center, but two outs later he's caught trying to steal second on what was likely a blown hit and run. Hairston swings and misses and Morse is hung out to dry. CS. Stauffer's line: 7.0 IP, 4 H, 1 R, 1 ER, 4 BB, 4 K's, 91 pitches through seven.

1. Y-Stairs-Y?: Padres' reliever Mike Adams, who gave up the game-winning HR to Michael Morse last night, is at it again in the Nats' eighth, surrendering a leadoff double to left center by Jerry Hairston that falls in between the left and center fielder, Ryan Ludwick and Blake Tekotte. Leadoff double. Matt Stairs pops out to center unproductively. Rick Ankiel K's swinging at a 1-2 slider outside. Ian Desmond K's looking at a 0-2 slider way outside. Hairston's stranded. Still 2-1 San Diego. Henry Rodriguez is throwing hard, but wild as usual and he puts two on in the top of the ninth. Two down and Logan Forsythe lines to left for a single. Chase Headley tries to score from second, but Laynce Nix 's throw is on target and Pudge makes a great play to tag the runner for the 7-2 putout.

• Riggleman on using Stairs after Hairston double instead of bunting and playing for one run: "Well, I felt like with Matt [Stairs] up there that we could do both, we could pull a ground ball and get [Hairston] over to third which would accomplish as much as a bunt would, but we might drive one into the gap, so I was confident that Matt [Stairs] would get it done there, and [Mike] Adams painted him pretty good to get 0-2 and then threw a little bit softer pitch to get the pop-up, but my thinking was basically we're going to tie it with Matt or win it with Matt, and if we don't we've got [Ankiel] up there who I had confidence would get him in from third or get a hit, so I could've bunted him over with somebody, but I felt very confident that we'd get that runner over to third."

0. Boos?: Jayson Werth hears some boos for the first time from the Nationals Park crowd after striking out swinging through a high heater from Heath Bell for the first out of the Nats' ninth. Laynce Nix K's too, but Bell's pitch gets by the Padres' catcher, Rob Johnson, and Nix is safe at first. Roger Bernadina comes on to run for Nix. Michael Morse, looking for his fifth HR in 5 games, grounds into a game-ending double play instead, Bartlett to Forsythe to Hawpe to end it. Padres win, 2-1 final. 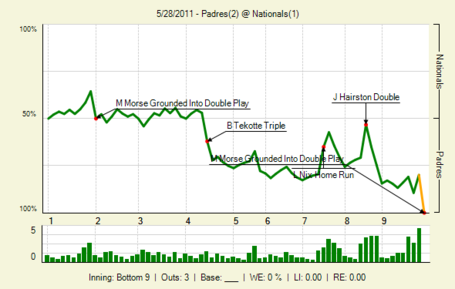